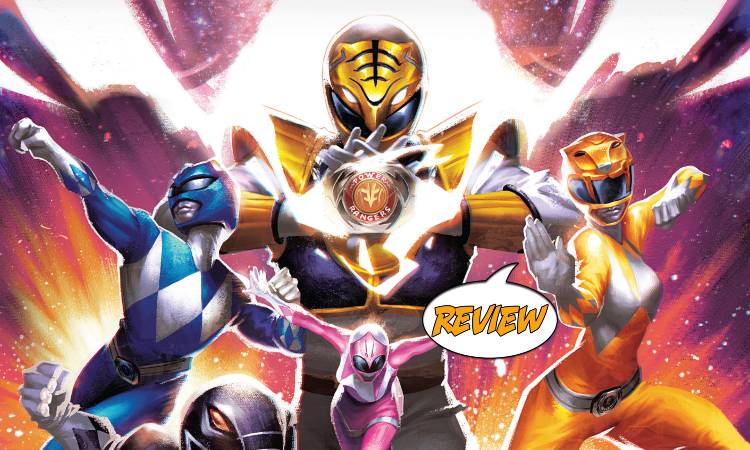 Previously in Mighty Morphin’ Power Rangers: All of your favorite Rangers, recharged and ready for a bold new direction for your favorite Teenagers With Attitude that begins right here!

This issue opens with a flashback to a time ten thousand years ago, as Zordon of Eltar passes his judgment on Rita Repulsa, imprisoning her in a dumpster on the moon. Things go awry immediately, though, as the witch casts her last spell for revenge, dispelling his body and leaving him as a floating head in a jar. The whole thing is actually a nightmare that Zordon experiences, now that he can take a moment to rest. After a long series of crises, the Power Rangers finally have a little time to themselves to reflect on the madness of their last few months, even traveling to Promethea Station to train with Green Ranger Matt. Their game shows off the team’s new confidence (as well as a possible new romance in the ranks) but ends with an emergency alert. The moon has suddenly popped back into view after disappearing, along with a desperate signal begging the Power Rangers for help.

That fact that the terrifying Zedd is behind the distress signal is a big shocker, especially given the terror of his arrival back in ’96 or so, but the reveal of what’s really happening on the moon is even more frightening. This issue ends with a return that I think everyone saw coming, but the execution of it all is still effective and the art throughout the issue is also pretty phenomenal. di Gianfelice makes the sight of Putty Patrollers terrifying, and the final page splash of a revived Rita is honestly frightening. We also finally get some character development for the new Green Ranger, with nice moments for Yellow Ranger Aisha and a little bit of drama for Zordon himself. After the era-ending events of issue #100, there was a possibility that this could be a disappointment, but nothing about this disappoints.

Long story short (TOO LATE!), Mighty Morphin’ Power Rangers #101 is exactly what a new creative team needs, an issue that re-establishes the characters and setting, reminding everyone of the players before adding in the complications, and ending with a strong hook, earning 4 out of 5 stars overall. I’m impressed with this creative team’s debut and looking forward to seeing what comes next.

The new seven-person Power Rangers team sees a new era, a new normal and a very familiar foe, but it all holds together very well.