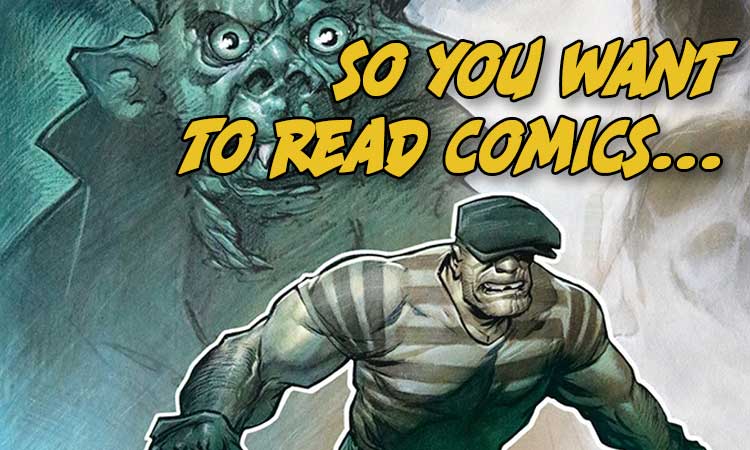 So You Want To Read Comics: Comedic Horror Edition

We’re laughing through the fears with this week’s “So You Want To Read Comics”.  This is our weekly feature where we take a look at a single topic or genre, then give you two comic book recommendations, perfect for new readers, based on that topic or genre.  This week we’re looking at the horror subgenre, comedic horror.

Many pioneers in the horror genre have seen comedy and horror as being part of the same range of genres.  With both of them attempting to elicit responses from the most basic parts of audiences’ brains: fear and amusement.  Many early horror stories incorporated some elements of black humor or gallows humor and it wasn’t long after cinema came into being that filmmakers were trying to capture this same dichotomy on screen.  The first commercially successful attempt at this was Abbott and Costello Meets Frankenstein and since then there has been no shortage of comedic horror films.   Movies like Evil Dead, Re-animator, Dale and Tucker Versus Evil and even the slasher flick Scream have incorporated humor into their grisly tales.

Here are a couple of comic book series for those who like to mix in some chuckles with their bloodshed.

Probably more well known for the tv series that it spawned,  iZombie was an early 2010s comic series from DC that told the story of Gwen Dylan, a twenty-something gravedigger living in Oregon, who also happens to be a zombie.  In this universe, zombies are able to stave off becoming mindless monsters by consuming brains at least once a month.  It just so happens when Gwen eats a brain she can see the brain’s owner’s memories.  What this series does so well is to take familiar concepts like zombies, werewolves, vampires, and ghosts, and then add just a smidge of absurdity.  For example, one of Gwen’s friends is a were-terrier, who turns into a bipedal scotch-terrier instead of a wolf.  There’s still plenty of horror to go around though as many of the people who Gwen gets her brains from have died in horrific and gruesome ways.  The series has ended, so it’s possible to read the entire series in multiple volumes or a single omnibus.

The Goon is somewhat of an indie-darling in the world of comics.  Its popularity has led to spin-offs and many crossovers with other comic book properties, meaning that once someone starts reading it, it’s possible to follow the threads into a whole world of comic books.  At the heart though, is a story of the titular Goon, a hulking strongman who battles the occult, zombies, monsters, and evil clergymen with his two fists and whatever blunt object he can get his hands on.  The humor in this series often comes from the nonchalant ways that The Goon reacts and interacts with the supernatural horrors he encounters.  Rather than being terrified, he is more often annoyed and unimpressed.  Also, The Goon has a large cast of characters ranging from despicable, to terrifying, to incompetent, to endearing, which has contributed heavily in this series being a crowd favorite.

What are some of your favorite comedic horror stories?  What do you think of these recommendations?  Let us know in the comments section below.