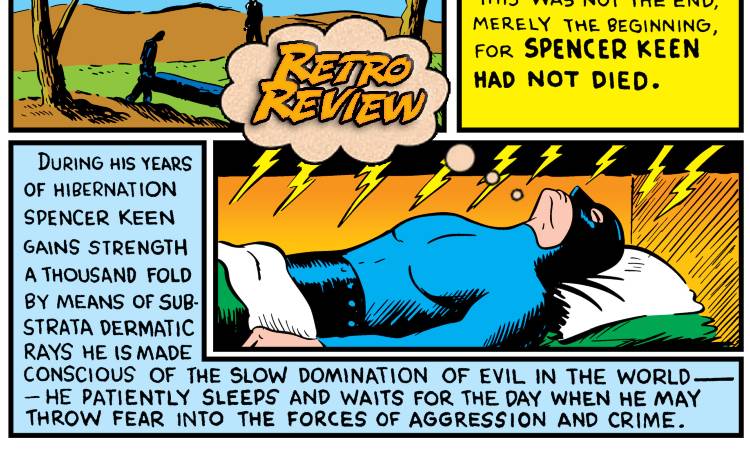 Sure, the Marvel Universe started with an artificial intelligence, but what about the SECOND android in the 616? What about… FLEXO, THE RUBBER MAN? Your Major Spoilers Retro Review of Mystic Comics #1 awaits! Previously in Mystic Comics: The earliest years of comics publishing were truly the proverbial Wild West. As the nascent Timely/Atlas/Marvel juggernaut was getting off the ground, Centaur Comics was on its way out, which is how Centaur’s art director was behind the packaging (and possibly the creation) of the first Marvel character, the Sub-Mariner. It’s how a character called The Wasp went from that sorta/kinda Marvel comic to Lev Gleason publishing, then to Harvey Comics. It’s also how the Harry “A” Chesler comic studios went from producing books for Centaur (and nearly everybody else in the industry) to producing books for Timely… and nearly everybody else in the industry.

That includes most of this issue, including the debut of Flexo, a robot created by brother inventors Joel and Joshua Williams. Both Doctors, the Williams brothers are able to borrow some radium from a local hospital, where it’s being used for chemotherapy (!!) during the day. Their plan for the radioactive material is a little bit more esoteric, as they were engaged in experiments with alternative power. Unfortunately, Doctor Beezle is a criminal who plans to sell the radium to an evil doctor in order to power his death ray. He has, unfortunately, crossed swords with the wrong Doctor Brother Geniuses, as Joshua manages to fish out a very special remote control. Another wonderful thing about Golden Age comics is a complete lack of worrying about what is and isn’t “cool,” “badass,” or otherwise stilted. Flexo is a goofy cartoon man, befitting an inflatable rubber robot, but that doesn’t make him any less effective. Bouncing butt-first onto the villainous doc, Flexo uses his stretchy hide to deflect bullets, even tying up the criminals’ escape vehicle with his rubbery feet, Plastic Man style. The art here is by Jack Binder (older brother of Legion of Super-Heroes creator Otto and the man who co-created the Golden Age Daredevil at Lev Gleason Comics) and it’s gloriously hyperactive. Fortunately, before the Rubber Man gets dissolved by the evil scientist, he… gets gas! But it’s at least a special, secret, experimental gas (that also allows him to fly), so it’s cool. I also find it interesting that the final panel promises more Flexo in Daring Comics, another anthology book from Timely created by the Chesler studios. After Flexo’s debut, we get the first appearance of The Blue Blaze (not to be confused with The Blue Blade from The Twelve), science fiction with space jockey Zephyr Jones, an adventure of the 3 Xs (who have made more appearances in the last few years than in the Golden Age), the first appearance of Dakor The Magician (who reappeared in the Fraction/Allred FF series a few years ago). Oh, and speaking of The Twelve, you may recognize this feller. That’s right, Faithful Spoilerites! It’s the first appearance of Dynamic Man, a key player in that narrative. Mystic Comics #1 launches the series that would give us Black Widow, Mastermind Excello, and The Witness of The Twelve, much of the cast of All Winner’s Squad; Band of Heroes, The Thin Man of the Liberty Legion, and more, with a mix of fun art and shameless Golden Age gormlessness earning 3 out of 5 stars overall. The pages of Mystic and Daring have actually been more influential to 21st Century Marvel than they ever were to the Golden Age, and given the obscure fun of these pages, it’s quite easy to see why.

Martin Goodman's earliest Timely books were all bought from third party packagers, making this one a veritable "Hey, it's THAT GUY!" for aficionados of Golden Age characters and creators.

The fun is really in the details.