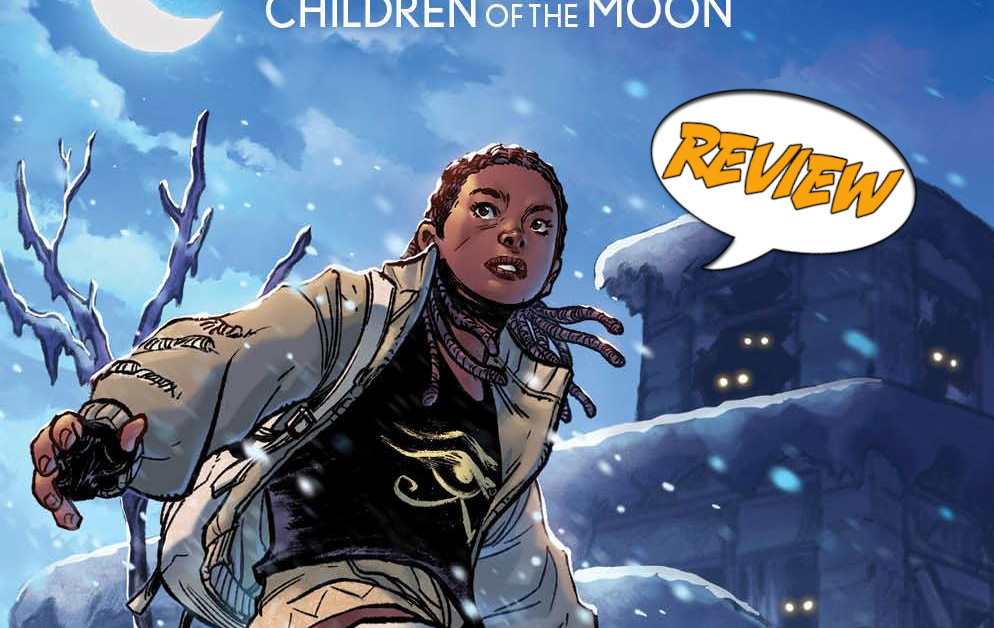 Eve: Children of the Moon #1 Review

Eve, Eve’s sister, and Wexler saved humanity from a deadly virus! Now that the world is rebuilding, can they create unity and community? Find out in Eve: Children of the Moon #1 by BOOM! Studios.

Previously in Eve: Eve woke up from sleep to find Earth infected by a virus that takes effect when a person hits puberty. With her robot teddy bear, Wexler, she set out to release a cure and save the world. On her way, she met her clone and a handful of kids struggling to survive. Now that the world is saved, can the kids rebuild?

NOT ON THE SAME PAGE
[/su_heading]

Eve: Children of the Moon #1 start celebrating with Eve and his crew. As they head back to work, they check in with the kids of the United States and realize that a group from Wisconsin has never responded to them. They opt to fly and talk to them directly. As Eve and clone Eve operate the spaceship, they realize they have different fingerprints, meaning they aren’t exact clones.

On Earth, they are immediately met with hostility, and Wexler momentarily fights back before making a retreat. Eve and Eve’s sister try to parley. They mention that the virus is gone, and they can remove their masks. The person in charge wants to kill Wexler for his betrayal and reveals themselves as another Eve clone. (I think it is a clone, at least)

The first miniseries featured the question, what world are we leaving our children in? It was interlaced with concerns about how we treat the environment and the implications of our treatment of mother nature. In Eve: Children of the Moon #1, the primary conflict is these weird, masked people and their relationship with Eve and her father. We will likely see a theme of family and forgiveness since this group of people want Wexler dead and has an eerie cult vibe.

With that note, Eve: Children of the Moon #1 did a great job recapping the last series and providing foundational work for the new one. I’m not sold on the theme yet, but I think the story has a tone of potential. The art style is also incredibly well done. The use of green at the beginning of the comic provides excellent visual contrast to the white of the snow used later is an intelligent decision. Good work by the creative team.

I’m not sold on the series yet. It has a different tone and feeling than I remember from the first series. However, change is not a bad thing. The main characters are well-developed, and I am excited to see more interpersonal conflict between characters. This book is a solid 4 out of 5 stars.

Eve: Children of the Moon #1

Eve: Children of the Moon #1 takes a promising new direction to the series that promises to tell a good story.