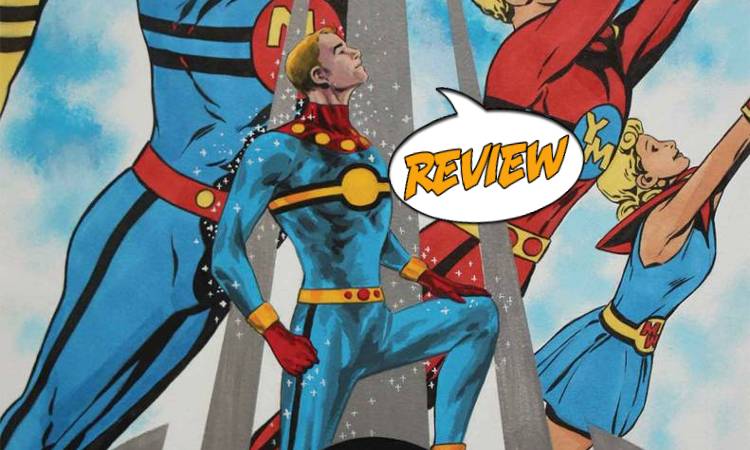 It’s a story thirty years in the making! Your Major Spoilers review of Miracleman: The Silver Age #1 from Marvel Comics awaits! Previously in Miracleman: The Silver Age: Young Miracleman – the lost member of the Miracleman Family – is back! His last memories were of a 1963 world of joy and innocence. Now, he’s been thrust into the 21st century, where his best friends have become gods and monsters.

What will become of him?

After defeating and being forced to kill his youngest sidekick, Miracleman has decided to raise his other protege from the dead. This issue opens with a mockup of New York City and the “Miraclechildren” at play, mocking the superhero battles of pop culture. Their revelry is interrupted by the announcement that it is Wake-Up Day, sending all the children home to Olympus. Cut to an empty (and very retro) bedroom, where Young Miracleman lies, ostensibly sleeping. He opens his eyes, remembering a horrible dream of an explosion, only to be greeted by the voice of his mentor, Miracleman. “Young’n?” Young Miracleman is comforted by the voice, then confused as he notices the changes to Miracleman’s costume. The attempt to slowly acclimate him to the year 2003 fails, as MM’s daughter Winter arrives to greet him. Things get more and more upsetting for the young man, as he meets new friends, finds out what’s happened to the old ones, and faces a world unlike the one he left behind. As the issue ends, he transforms back into human Dicky Dauntless and begins to cry in abject despair.

Marvel’s use of the Miracleman property has been very puzzling for me as a reader, focusing on the Mick Anglo stories that predate modern Marvelman/Miracleman, then presenting the Alan Moore issues in an incredibly overpriced format. This issue’s $4.99 price tag, while more expensive than the average comics, is appropriate for the story and the material within. Buckingham has completely redrawn this issue in his modern style, making it a new experience even for those of us who managed to find Eclipse Comics’ final printed issues back in the ’90s. The changes that have been made are wise ones (like removing a comparison of MIracleman to J*s*s and clarifying the location of the faux Manhattan) that enhance a story that was already morbidly fascinating. Best of all, the dramatic centerpiece of the issue, Young Miracleman’s introduction to the other inhabitants of Olympus, is vastly improved by a better establishing shot, stronger expressions on the characters and, to be frank, 30 years of experience for the penciller.

There are really two possible audiences for Miracleman: The Silver Age #1, those who have read it before and want to see the updated version, and people who wonder what all the fuss is about, and for both of them, I want to say only this: 4.5 out of 5 stars overall. If you’ve never “gotten” what Miracleman’s buzz is about, this issue should serve as a lovely introduction to the power of the setting and characters. If you’ve been here before, as I have, this book serves as a sort of “Director’s Cut,”  making adjustments here and there to strengthen the story, serving only to make a quite good book that much better.

This issue is structurally identical to its 1993 presentation, but Buckingham's decision to upgrade the art has added drama to an already engaging comic story. Top-notch stuff.