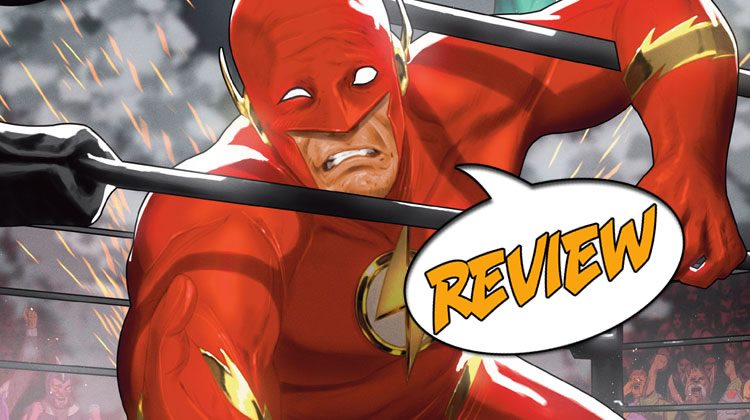 Wally gets tangled in an intergalactic wrestling match, and it’s fun! Take the jump for our review of The Flash #787 from DC Comics.

SOLICITATION: IT’S MONDAY NIGHT SOMEWHERE! (Mondays, amiright?) Wally West is back from his adventure to save Barry Allen, but there’s no time to celebrate as a new alien with a penchant for golden belts and trucker hair has added a new sting to the life of the Flash! This stone-cold heart-stopper of an issue will have you screaming “OHMAHGAWD!” as the Scarlet Speedster gets clotheslined in the face by a whole new era of attitude!

The Flash is one of the best comics coming out from DC today! Really and for true!

In this issue, Wally is back from the Crisis, and he’s trying to balance being a super-hero with his family life. Since he hasn’t been able to sleep much, when a pair of alien wrestlers land in Central City, at first he thinks they’re part of a TV wrestling show… that’s before his wife recognizes the downtown area not far from where they live. That prompts Wally to try to save his city from being destroyed in the mayhem!

It always interests me when writers on this title differentiate between Barry Allen and Wally West. Barry is much more of the adventurer who works to resolve a situation as quickly and safely as possible.

However, this is Wally in the red suit, and he’s a much younger family man who sees there is fun to be had and actually dives into it!

There’s a fun contrast between the beginning and the end of this issue. Wally calls himself “the most tired man alive” as a result of all his efforts being a hero and raising his children. Things change by the end, and Wally then refers to himself as “the luckiest man alive” due to his adventure in this issue!

Then, too, the alien wrestlers are entertaining opponents (and friends) that poke fun at wrestling we’re used to. Even their names got me, from Kriegmesiter10 to Commander Powtower to Omega-Bam-Man to the Clang and Bang duo to Maul and Klee Pan. And Flash is renamed “The Flasher” because it sounds more like a wrestling name during the match.

Even the organization’s name is funny. It’s called Wrestling Across the Multiverse, or WAM for short. “I don’t know what this is, but it might be my new favorite thing,” says Wally’s daughter. “Same,” says the rest of the family watching.

I’ll admit that I’m not a wrestling fan. However, this issue made me wonder if I shouldn’t check it out!

The pacing and characters made this issue fly by for me, and the narrator (who somehow is able to talk about what’s happening over the TV and around the fighting) sounded just like what I thought an earthly one would sound like! Very enjoyable!

I particularly thought that Omega talked like Lobo (who makes a guest appearance) a lot. I bet writers fashion what the Main Man says after wrestling guys!

As always, I judge art in a comic book on two levels: facial expressions and action sequences. The art is really great when it comes to Wally’s expressions, including when he’s surprised as well as when he’s upset. It’s an excellent portrayal that brings Wally’s humanity to the forefront!

The action (particularly during the wrestling sequences) is also done very well. I actually winced on occasion when the wrestlers were performing their various moves, such as the Cosmic Elbow or the Flying Arrow. (A fan of wrestling might actually recognize those moves, I bet!) The costumes were well done, and the chaos is portrayed well. At one point, Wally is standing amongst the wreckage when he says, “Man… I live a weird life.” Very well portrayed!

It is truly rare these days when a story actually concludes during a single issue in today’s comics. This one does that, providing an engaging and exhilarating tale that should serve as an example of how to make a quick diversion into an enjoyable bit of storytelling!

Like Wally’s family and others in the DCU, we cheer when he’s actually figuring out how to take on these alien wrestlers. Not to spoil much, but when the story wraps up, we feel for Wally when he actually survives and wins on some levels!

For people who say DC is nothing but dark and moody stories, I would point them to this book! It really was a pleasant break from the death and gloom going on in other comics. Highly recommended!

This book really was a pleasant break from the death and gloom going on in other comics.