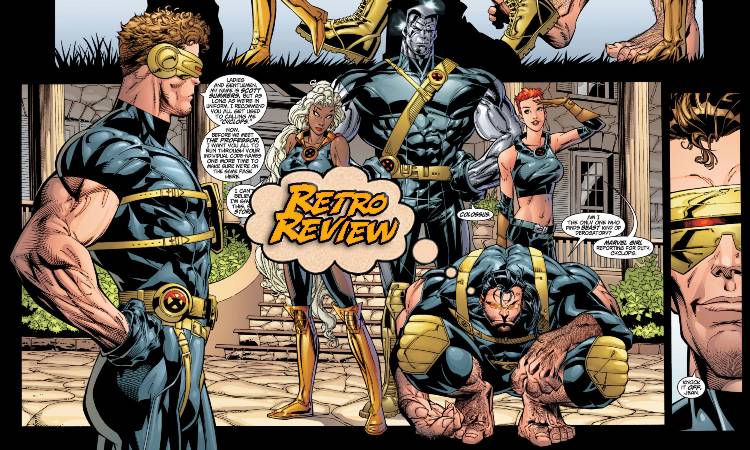 Ultimate Spider-Man was an unexpected hit for Marvel in the year 2000, leading to an entire Ultimate line of comics. But as anyone can tell you, it’s not a party without the X-Men! Your Major Spoilers Retro Review of Ultimate X-Men #1 awaits!

Previously in Ultimate X-Men: The brainchild of Bill Jemas, the Ultimate Marvel Universe was literally the proverbial “Hail Mary,” a last-ditch attempt to revive a company nearly destroyed by the speculator mentality and recovering from Chapter 11 bankruptcy. Writer Brian Bendis has stated that he thought his revamp of Spider-Man could be the last thing Marvel ever published, so when it became an unexpected runaway hit, it was a given that more Ultimate stories were in the offing. The writer chosen to relaunch the X-Men was Mark Millar, a Scottish writer who didn’t have much familiarity with previous X-stories, but who had had great success with The Authority over at Wildstorm Comics.

We open in Los Angeles, where a perfectly normal day is suddenly filled with the sound of giant rocket-powered robots! Where Ultimate Spider-Man chose to zoom in and focus on the character to refresh Spidey, this story takes the opposite tack, with over-the-top movie craziness from the first page. The sight of Sentinels murdering people in broad daylight is hailed as a roaring success by the George W. Bush administration, whose deployment of killer robots has come in response to a series of bombings by a cult known as the Brotherhood of Mutants. The group’s leader, Magneto, sent out his manifesto after an explosion on Capitol Hill. In a bar in San Diego, Henry McCoy watches the news with apprehension, only to have a beautiful woman approach him with an offer he can’t refuse. In Athens, Texas, car-thief Ororo Munroe is broken out of jail by the same pretty young redhead. In New York City, mafia bagman Piotr Rasputin is forced to reveal his ability to turn to steel when a drop goes bad, only to be saved from a fate worse than death by the well-traveled Miss Jean Grey. She brings them back to her school, where the headmaster telepathically welcomes them… to the X-Men! He explains that he was once friends with cult leader Magneto, but now seeks to oppose him. Adam Kubert and Art Thibert combine for a really wild style here, with elements that feel like Humberto Ramos, others that feel like Chris Bachalo, and an overall tone that practically SCREAMS “We want to be just like The Authority!” It’s also interesting to see that, when Cyclops joins them as leader, this debut X-team is part original X-Men and part All-New, All-Different. Cyclops, Beast, Marvel Girl, Colossus, and Storm are sent out by Professor X to find another young mutant, a boy named Bobby Drake who is currently living on the streets of New York City. When they set out to recruit him, The X-Men find they’re racing against half a dozen Sentinels, forcing them into combat for the first time. Storm’s lightning takes down two robots, Beast’s prowess with geometry takes out two more, Cyclops decapitates a fifth with his eye beams, and as for the last one? Little Bobby Drake proves that he may be the most dangerous mutant of all, freezing it solid with a single blast. The crowd, however, is not impressed, and the leather-clad mutants are forced to literally run for their lives. It’s interesting how closely this aligns with the X-Men movie from earlier in 2000, making me wonder if Millar or someone higher in editorial chose to create a little of the ol’ corporate synergy. Millar’s script is much more cynical than the movie, though, dehumanizing mutants thoroughly (the news refers to a “nest” of mutants), making everyone’s dialogue cutting and sardonic, and having Magneto stop to fat-shame a lackey before murdering him with magnetism. It stands as perhaps the most Mark Millar-y thing ever printed, until the launch of The Ultimates in 2002.

Oh, and it has a big twist ending as Magneto decides to send out his most skilled killer to target his old friend, Charles. That’s when we meet his head assassin, Ultimate Wolverine! Dun-DUN-DAAAAAAH! Given that the Ultimate Universe was meant to be a full reboot of Marvel continuity, it makes sense that this book emblemizes the year of the first Vin Diesel movie, the year of Scream 3, and the year of American Psycho, but the post-modern snark and pessimism of it really turn me off. That, combined with the slightly-more-successful-by-not-quite-consistent art style, makes Ultimate X-Men #1 a difficult read in the year 2022, earning 2 out of 5 stars overall. The story feels very dated and tonally unpleasant to read, but it is much more transformative than Bendis’ Spider-Man, though, so I have to give Millar credit for taking a gamble on something different.

This issue bites off FAR more than it can chew and lacks the charming updates that made Ultimate Spider-Man so engaging, coming off as snide and belligerent.