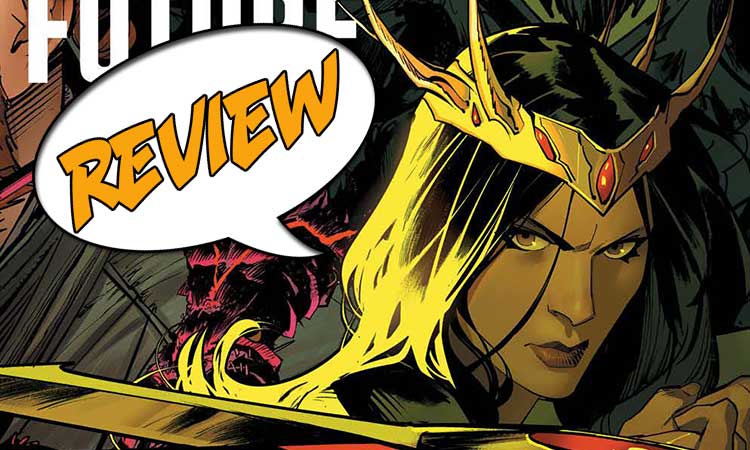 Once and Future #30 Review

So many stories compete to change their future. Will the fate of Duncan and his family affect the fate of England and the legend of Arthur? Find out in Once and Future #30 from BOOM! Studios.

Previously in Once and Future: Galahad is dead and his mother, Mary, leaves the Grail Castle. The Green Knight strikes down Gawain/Rose, but she has the scabbard of Excalibur and survives. Not only that, when she is chased and finds herself backed up against the sword in the stone, she shares some traits with the legendary Arthur. She draws the sword, and a new Arthur enters the story. Bridgette and Duncan kill the Gorgon and reach the River Lethe. This takes them to Hades where they find the body of the undead Arthur. Merlin is upset, but he believes Rose will fall and his Arthur will rise again. He offers Mary a chance to get her son Galahad back, but only if she is willing to let Duncan die.

THE INEVITABILITY OF THE END

Once and Future #30 is the finale we have been waiting for and it does not disappoint. It covers a lot of ground, popping in to visit a few loose ends and tying them up neatly. To start us off, we briefly see Jack at the Grail Castle. His grip on reality has been sorely tested, yet he continues to care for the people in his charge. Even at the Castle, they hear the dragon’s arrival, and Lancelot realizes the story is coming to a close.

In the Underworld, Bridgette and Duncan face off against a dragon. They need to divert the River Lethe to the Otherworld. Bridgette realizes that Mary is trying to kill Duncan and bring Galahad back to life. Duncan faces down the dragon to buy Bridgette enough time to set off the fuse for their explosives. Then Mary arrives and we are reminded that one of the conflicts central to the entire story is that of mother and child. Is family truly important? And who is responsible for whom?

Then Rose makes a brilliant entrance on the back of another dragon. She befriended a dragon several issues ago, and she was able to call for it. As the outsider to the story, she brings a new kind of heart to it which is glorious. And of course, as Arthur, she would never allow harm to come to Guinivere, which gives Duncan a new role to fill.

But the fuse is still not lit. Mary is holding Bridgette off at gunpoint. Duncan tries to convince her to let her go and they can all return to being as much of a family as they can. Mary still wants Galahad to come back to her. And then we, as they, realize that they are in the tale of Orpheus in the Underworld. Bridgette sadly points out to her that if Galahad comes back, he may come back like Arthur and Merlin, as stories doomed to repeat endlessly, gradually losing their tenuous grip on their humanity.

Being trapped in a story, trying to leave the Underworld without looking back, hoping to make everyone forget everything in order to save an entire kingdom – it is a huge and daring task and who knows what the consequences will be? Suffice it to say that I loved the way everything came together using familiar stories but giving them enough of a twist that they come across as something fresh and new.

In Once and Future #30 we see the triumph of the way the entire creative team worked together to create a distinctive world where every subtle detail adds to the entire impression. The art is dramatic. It is not merely the terrific depiction of the characters and the glorious settings. Even the choice of panel design and placement communicates drama and tension, leading us through conflict to glorious moments such as when Rose arrives on the scene with her dragon. Special lettering for special characters adds to their mystique without detracting from the page. The coloring, especially in the Otherworld and the Underworld, practically leaps off the page, often using complementary colors for contrast and drama.

And yet there are smaller details that speak volumes. Mary wears a hooded coat and the hood shadows her face. It gives her the semblance of wearing a dark mask which also highlights her manic eyes. But at times, as she speaks, her mouth also appears dark which gives her face a skull-like appearance as though to tell us that she is doomed. She has not been a part of the story as long as Merlin and Arthur have, but in her, we see the face of someone taking her first steps along the path to losing herself to the story.

Once and Future #30 delivers boldly on its promise. This was a grand undertaking that pays off hugely. I love the way it uses familiar elements of classic stories, yet plays with their flexibility to deliver retellings that evolve as things change over time. It is a delightful read that one can return to and enjoy again and again.

They say all things must end, but can a legend ever really end?