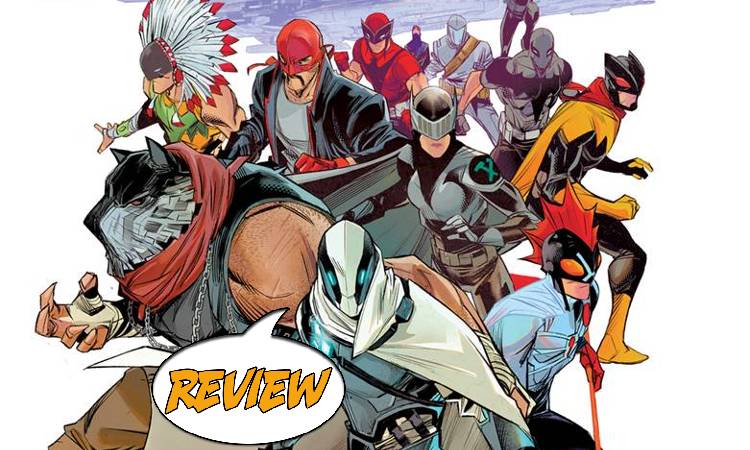 The Bat-Conglomerate is back in action, but this time Ghost-Maker is in the driver’s seat. Your Major Spoilers review of Batman Incorporated #1 from DC Comics awaits!

Previously in Batman Incorporated: Someone from Ghost-Maker and Batman’s recent past is brutally murdered! Is this an isolated event, sending a message to the two?

Or is this the start of something darker and more sinister?

IS IT REALLY A TEAM?

In the alleys of Dublin, a man runs for his life, bleeding from a number of what seem to be stab wounds. He turns to face his attacker… and then we smash-cut to the next day, as The Knight and Irish vigilante Black Mist unite to investigate. Turns out that the murder victim is Tommy Tivan, one of the men who trained not only Ghost-Maker but Batman himself. That same Ghost-Maker is in the field searching out Lex Luthor’s last Batman labs with several operatives (Dark Ranger, El Gaucho, Clownhunter, Gray Wolf, and Wingman), but Luthor has erased his trail too well. As more former teachers die, Ghost-Maker and the Bat-Inc, squad leap into action, investigating where they can, until they find themselves in Shanghai, where they find one former instructor still alive.

The first thing that I noticed about this issue is the art, an incredibly stylized take where nearly everyone seems to be ten or eleven heads tall, with whipcord limbs and odd proportions. The moment where The Knight meets Black Mist makes both women look like they’ve been trapped in a taffy puller, and when the action sequences begin, their seemingly broken limbs gesticulate madly. It’s really unpleasant to look at, with ragged outlines and little in the way of establishing shots. The story is equally hard to follow, as Ghost-Maker haughtily commands his agents like employees, while each of the would-be Batmen has only one real characteristic. Weirdest of all is Mister Unknown, The Batman of Japan, who for some reason insists that he doesn’t have a name other than “Batman Japan” in conversation with Clownhunter. That seems to be his new goal, figuring out a new name, but… his name is Mister Unknown?

BOTTOM LINE: NOT MY FAVORITE

With its combination of an army of one-note characters and art that seems to want to combine Peter Chung with Clark Hawbaker, Batman Incorporated #1 made for a hard read, fighting me both in its content and its style, earning a disappointing 2 out of 5 stars overall. If this series is going to survive, a clearer mission statement and deeper characterization are absolutely necessary, and while I recognize that the art is a choice, I’d like to see it cleaned up as well.

Nobody has much character, interactions are awkward and the art is awkward and elongated, making for a difficult, confounding read.