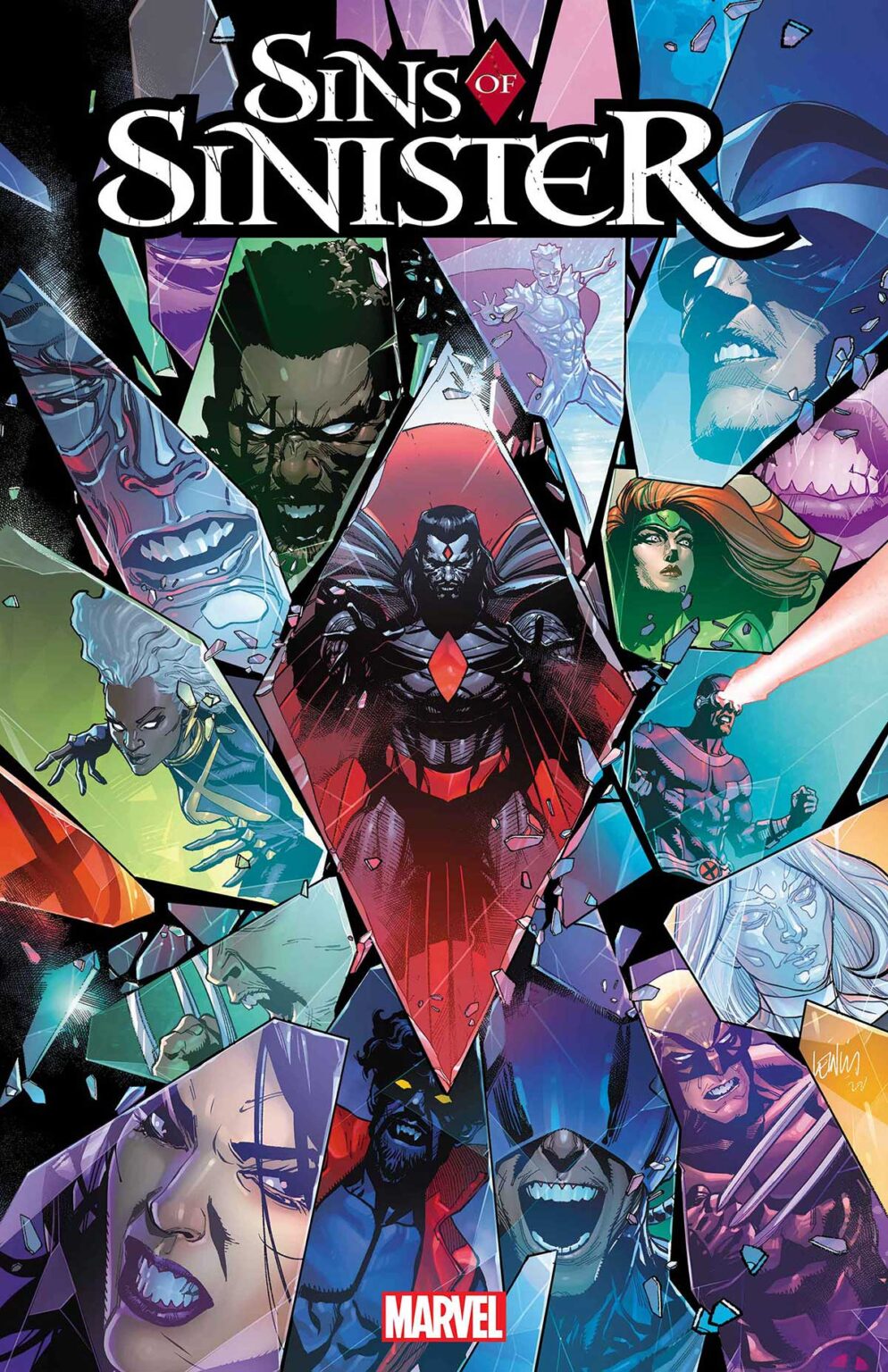 After months of teases, SINS OF SINISTER, an all-new X-Men epic, was just announced at the Marvel Comics: Next Big Thing Panel at New York Comic Con! The crossover will begin in January’s SINS OF SINISTER #1, a giant-sized one-shot by the visionary Immortal X-Men creative team, writer Kieron Gillen and artist Lucas Werneck. After that, witness the current Krakoan era crumble and enter a new Marvel Comics age brought about by Sinister’s corrupt machinations!

Immortal X-Men, X-Men Red, and Legion of X will be washed away, transformed into three limited series: IMMORAL X-MEN, STORM & THE BROTHERHOOD OF MUTANTS, and NIGHTCRAWLERS! Series writers Kieron Gillen, Al Ewing, and Si Spurrier will pen their respective new titles, joined by artists Paco Medina, Patch Zircher, and Alessandro Vitti. Tackling three separate time periods, each superstar artist will draw an issue of all three titles as consecutive issues propel the Marvel Universe further and further into a dark future, dramatically escalating the stakes with each startling time jump. 10 Years… 100 Years… 1000 Years… The Powers of Essex will seek to stretch beyond the limits of time and space! All three writers will continue their current story plans after the X-Universe shattering finale one-shot, SINS OF SINISTER: DOMINION #1! This universe-melting X-event will introduce a horrifying timeline that makes the Age of Apocalypse look like the X-Men Swimsuit Special as Mister Sinister’s repulsive plans come to fruition. Currently playing a dangerous game with the very timestream of the Marvel Universe in the pages of Immortal X-Men, Sinister’s uncontrollable lust for domination will finally be satisfied but at what cost? It’s the end of the world as we know it, but at least Sinister feels fine. For now. Can that last? Especially when we discover that he really is his own worst enemy…

Infamous for his long-term meticulous manipulating, Mister Sinister’s scheming will yield unpredictable results in an overarching saga that pays off plot threads that have been haunting fans since Jonathan Hickman’s House of X and Powers of X! Sinister has been planning all this since the beginning…and is going to have to see through to the bitter end.

In STORM & THE BROTHERHOOD OF MUTANTS, face the wrath of Arakko! Mars has been destroyed – and now Storm wants revenge! To get it, the New Brotherhood of Arakko will battle their way through hell to seek the greatest secret of the Sinister Age…but are they fighting to save the world — or end it? And who is the new mutant hero called IRONFIRE?

Deadly powerful mutant chimeras are spliced and diced in NIGHTCRAWLERS! Mister Sinister unleashes his private army of assassins: THE LEGION OF THE NIGHT. Meet WAGNERINE, commanding this killer-crew of brainwashed hybrids, each one a genetic mix of Nightcrawler and one other of marvel’s most murderous mutants! Mysterious forces seek to break Sinister’s control over these fatal fanatics – to turn them AGAINST HIM. But who are they? And what are their true motives…? Enter MOTHER RIGHTEOUS… and a meeting of the most powerful players in the Universe…

The leaders of mutantkind have gone bad in IMMORAL X-MEN! They said the mutants were humanity’s future. In 10 years’ time, they’re proven right. The X-Men are sworn to crush a world that adores and respects them…but Emma can take a few minutes out to crush Mister Sinister first. The Quiet Council have been at eachother’s throats since Krakoa was founded. Sinister may think he’s finally come out on top but he’ll wish he was more careful about what he wished for as his maneuvering backfires and a vicious conflict erupts with galactic-sized repercussions! Plus, the long-awaited return of a fan-favorite character from the early days of the Krakoa era—RASPUTIN!

“Sinister’s lurked around, being sinister for all the Krakoan Age. Eventually, he was going to make a play. This is it, and it’s bigger than you can imagine, stretching across 1000 years of nightmares,” Gillen explained. “Dystopic future stories are an X-Men classic. We wanted to find a new way to approach that, and give something we haven’t seen before. I think we’ve pulled it off. Sinister gets exactly what he wants, and it’s hell for everyone. Including Sinister.” Mister Sinister’s crimes have been wicked beyond imagining and now, the entire Marvel Universe will pay! Check out the covers of all the debut issues by X-Men extraordinaire Leinil Francis Yu, a complete event checklist, and descend into the SINS OF SINISTER this January! Stay tuned for more SINS OF SINISTERS announcements including outrageous new character designs, breathtaking covers, and shocking secrets about what’s to come! For more information, visit Marvel.com.