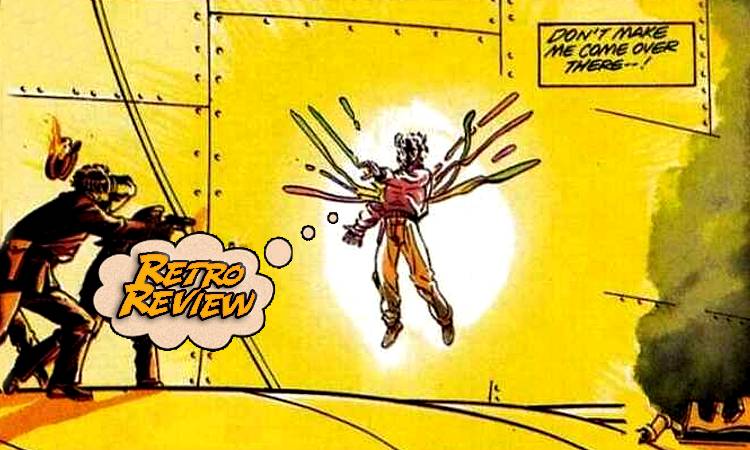 Phil Selesky just had the worst day ever, so he completely rebuilt the universe and made himself a god. Then, things got complicated. Your Major Spoilers Retro Review of Solar, Man of the Atom #1 awaits! Previously in Solar, Man of the Atom: The story of Valiant Comics is one that can be read many ways. On the one hand, it’s a story of pluck and defiance, with Voyager Communications being founded by Jim Shooter, former Editor-In-Chief of Marvel Comics. After being ousted in 1987, he assembled the backing to try and purchase Marvel Comics, but when they were outbid, Shooter founded his own publishing concern instead. Initially publishing licensed comics, Valiant launched their own universe in 1991 with Magnus: Robot Fighter, reviving a Gold Key Comics property from the sixties, leading us to another Gold Key revival. Regular readers of Retro Review may remember our look at the origin and first adventure of Phillip Solar, but familiarity with that story won’t be necessary here. Or, in this case, both of him. The issue actually begins with Phil falling to Earth like a David Bowie song, arriving at his home, and finding… himself? That big flash of rainbow energy in panel two above is the Phil Who Fell To Earth exiting and leaving another Phil Selesky behind in confusion. The stranger (whom we’ll call Solar to avoid confusion) sets off to a nearby prison to break up a riot, while Selesky returns to his work at the Edgewater Fusion Research Center, but the encounter with his alternate has left him somewhat frazzled. This quartet of panels brings up my first complaint with this issue, one I don’t recall having an issue with in the ’90s: The coloring. Solar’s powers are overwhelming bursts of orange, while night sequences are smeared with purple, and all the interiors of Edgewater become seas of gray/white. I think that it’s an attempt to do more realistic coloring, especially the prevalence of grays and browns, but the combined effect is unattractive and a little boring. While Phil prepares for the completion of his life’s work in fusion research, Solar seeks out more do-gooding, seemingly to occupy his time. This time, it’s a lost nuclear submarine. See What I mean about the yellow and white? Certainly, the paper quality and printing techniques of 1991 have something to do with it, but it’s also a recurring theme across this early Valiant Universe, a decision that I believe was made to differentiate the books visually from Marvel and DC’s more traditional four-color affairs. Issue one’s story is suddenly interrupted by a few pages of A DIFFERENT STORY in the middle, featuring the work of Barry Windsor-Smith and the first chapter of Solar’s origin story. One of Valiant’s unique marketing gimmicks was splitting what would become Solar Issue #0 over the first ten issues of the book, a gutsy move that moved a lot of comics, but it made reading the title difficult. The transition from the never-flashy art of Don Perlin to Windsor-Smith’s show-offy visuals is incredibly jarring, and while they are both drawing in what would become Valiant’s House Style, the book is an artistic patchwork.

Once we return to the initial story, we also meet someone who would become a key player in Solar’s life, fellow scientist Erica Pierce. See what I mean about Perlin? His storytelling is really good, the draftsmanship is precise, but it’s screaming out for just a little flash, and once again, the dull colors leave me wanting. Erica is quickly revealed to be the patented Jim Shooter mega-beeyotch character, snarling at the man who is for all intents and purposes her boss that he’d better get himself together before his negligence hurts someone else. It’s actually good advice, though readers wouldn’t find out just HOW good for almost a year. After saving the submarine (and detonating its nuclear payload in space), Solar ends up in an unnamed city that I think is Shooter’s hometown of Pittsburg, where he finds that it’s September of 1990, and realizes that he has something to do back in Oklahoma. When Selesky returns to his apartment, Solar confronts him once more, but this time he has a warning for himself. The issue ends with Selesky worried about why his doppelganger wants him to give up his life’s work, while Solar returns to the city and the homeless friends he found there. It’s a very Shooter ending, but Solar, Man of the Atom #1 is a VERY Shootery comic, showing the first glimpses of the intricate Valiant chronology that would define the company, earning 3 out of 5 stars overall. Shooter would be fired from Valiant by the end of 1992, with his business partner saying that he had a different vision for the company, but it cannot be ignored that his strict storytelling rules and attention to detail are what made this book and the initial Valiant titles work, and the intricate 2000-year back story made Valiant’s shared universe feel more cohesive than other launches of the era. It’s not like Vin Diesel was itching to do a live-action version of Night Man or The Pitt, after all.

Strong writing and the unbending Jim Shooter Rules of storytelling make for an interesting comic, but the coloring and house art style blunt the success, and the packaging of the "bonus chapter" is absolutely confounding.