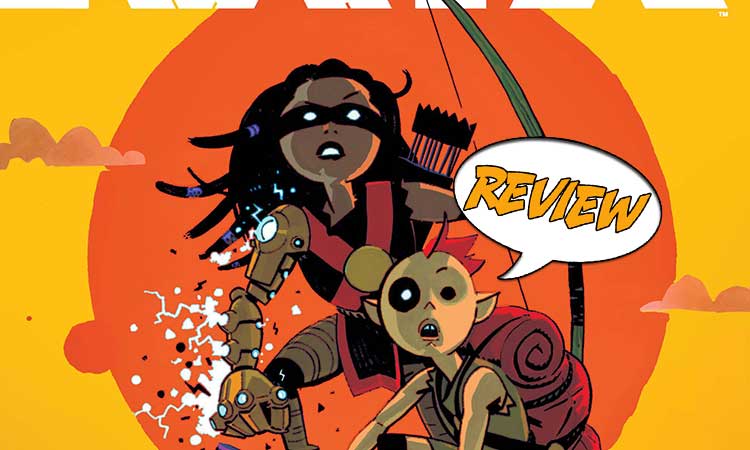 Their village is destroyed, and their people are dead. Kaya is determined to get her brother Jin to safety. But why has the world changed, and who stands in their way? Find out in Kaya #1 from Image Comics!

Previously in Kaya: Kaya and Jin’s village was destroyed. While Jin is destined to discover the secret to overthrowing those who did this, his sister Kaya is tasked with keeping him safe and getting him to a safe haven. The road is long and dangerous, and their journey is only beginning.

OLDER SISTER AS CARETAKER AND WARRIOR

Kaya #1 opens with Kaya and Jin making their way up a desert slope. Jin, the younger one, complains that he is hungry. Kaya is trying to reach a trading post where they can sell Jin’s scrolls and buy some food. Jin does not want to do this. The scrolls are all that they have left about their history, and he thinks Kaya should sell her knife. She points out that they are in a life-and-death situation, and the knife is more important. She also points out that he is still behaving like a prince. Plainly, their home and family are gone, perhaps even their country.

They reach the trading post and it is abandoned. I like that the narration we get for a while is the voice of an older Jin thinking back on this time and even recognizing that he was insufferable. The young Jin whines about being hungry, accuses Kaya of hoarding food, and then accuses her of being terrible. It captures the way frustration affects a child, the way they lash out at those around them.

Jin collapses in the heat, and Kaya hears Lizard Riders approaching. She grabs her brother and carries him into one of the abandoned huts so they can hide. They get some peace until one of the Lizard Riders fishes Jin out with a catchpole. He sends someone in to get Kaya and – surprise! – she has a magical arm. She holds several Riders off until one comes running up who recognizes her, Seth. Kaya’s uncle is a blood brother to Seth’s clan. He claims the humans are under his protection, angering Zothan.

It is when Kaya and Seth catch up that we learn more of the back story. Kaya’s village was destroyed, and she swore she would get Jin to safety. She plans to go north. Seth tells her that the Atrians have built a wall that she will need to get around. Meanwhile, he is here on a hunt with some of his clan’s former enemies. They are looking for a magron, an enormous and dangerous creature, but the Atrians have starved out their regular game, so what choice do they have?

He wants Kaya to come with them and help with their hunt. But it is not in the direction she wants to go. She is determined to keep her word. It is Jin who realizes their reality – they have nothing. There are only the two of them. Can she not ask for help? Jin also starts to understand how meaningless it is to be a prince when you have no people to be the prince of.

A WORLD OF BRIGHT DESOLATION

The art of Kaya #1 is bold and exciting. The opening panels are powerful as we see Jin and Kaya tiny against the land which is backlit by a sky swirling with orange clouds as though it is on fire. The first landmark we see looks like the ruins of a stumpy tower, but as the children move beyond it, we see it is an enormous, sculptured head. Kaya and Jin are human, but this world has its own cultures and peoples.

The characters are cartoony but very expressive, which fits the story. It takes very few panels for us to realize that Kaya is determined. She may recognize that her brother is the chosen one, but he is still her brother, and her little brother at that. In Jin we see his childishness both from simply being young and not having the wherewithal to deal with struggling to survive, but also his crumbling façade of expectations from being the prince. His journey through this issue is that of beginning to realize that when survival is on the line, some of the things you thought were important may take on a different value.

BOTTOM LINE: THE HERO BEHIND THE HERO

Kaya #1 is a stunning combination of story, art/color, and lettering. The world has changed for everyone, almost overnight. Nothing is the way it used to be, and these two young people plainly have a rough road before them.

Jin may be destined to save the world, but it is Kaya who is going to get him there.