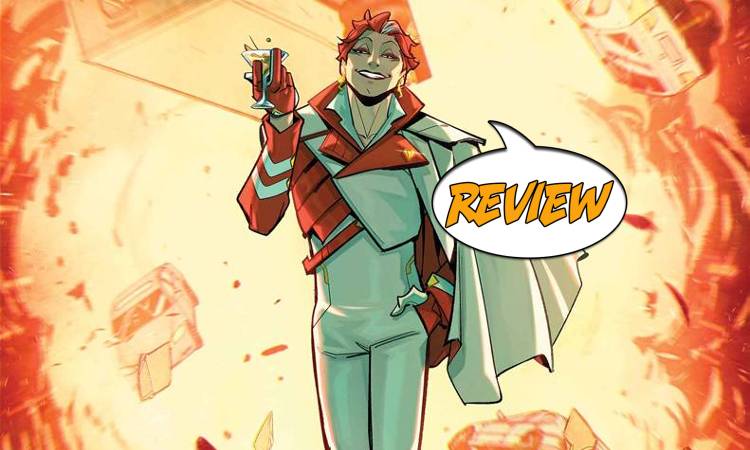 Love and Death, the Eternal conflict. Can Eros of Titan finally balance the scales against brother Thanos? And more, importantly, will the Earth survive? Your Major Spoilers review of AXE: Starfox #1 from Marvel Comics awaits!

Previously in AXE: Starfox: Eros the Eternal! Starfox of Titan! The equal of his brother Thanos, matching his achievements every step of the… What? Oh. But you know what they say. Come the hour, come the… intergalactic layabout who’d rather have a drink?

At least if this is Judgment Day, he won’t be around for a hangover tomorrow.

As The Progenitor’s judgment (long story short: Druig declared mutants deviant and set out to destroy them, The Avengers and X-Men upped the ante and now a renegade zombie Celestial has declared that the Earth must die) unfolds, Starfox finds himself in the eye of the storm. Thinking back to his youth as Eros, he tries to figure out a way to unravel the plot, only to find himself stuck between two minds. On the one hand, he believes in change in a way that the other Eternals simply cannot. On the other, as a nigh-immortal being who kind of embodies love, he really wants to just have a few cocktails, find a friend, and spend the end of the world in hedonistic peace. Of course, since he has been bonded to Earth on some quantum level and has also been named the newest Prime Eternal, Eros/Starfox has avenues open to him… if he can overcome the objections of his uncle, Zuras.

And by “overcome the objections,” I mean “not be rendered into his component atoms.”

The point-of-view here is an interesting one, taking what we know about Eros and making sure that it feels as epic as his brother, Thanos. A moment where he realizes that his existential power of “love” means that he can make two hydrogen atoms want to be together so much that they cause a nuclear fusion explosion is clever, but managing to avoid all the pitfalls of the character since Dan Slott broke him over fifteen years ago is nothing short of brilliant. di Nicuolo’s art is familiar to those of us who have been reading BOOM! Studios’ Power Rangers titles, but it’s remarkably effective here. Making Starfox an elfin, genderfluid presence with dramatic makeup and flashy style is so effective, especially when pitted against a Marvel Universe full of square-jawed Captains America, muscular Ikarises, and noble Cyclopses. The art makes this truly feel like Eros’ book, and when he finally puts his plan to save Earth’s population in motion, he does with a joke, the promise of cocktails and snacks, but most of all, joie de vivre.

In short, AXE: Starfox #1 is a spectacular success for me, delivering a story tailor-made for this character to shine, with art that makes him stand out and a truly impressive recapturing of the character’s roots, pulling together for a well-deserved 4 out of 5 stars overall. As someone who hasn’t been following the events of AXE, I like that the book gave me everything I needed to appreciate the story without making this feels like part 17 of 26.

A the mutant who is an Eternal who is an Avenger, Starfox is the unconventional key to the AXE conflict, and this issue makes a convincing case for his brand of heroism.