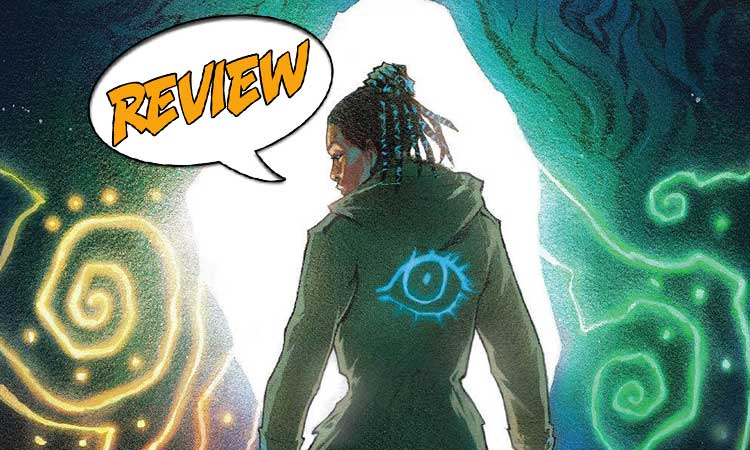 Regan is drawn to the final confrontation with Vanessa. But Barrett has changed loyalties and Hannah is a vital part of it as well. Who will survive? Find out in Basilisk #12 from BOOM! Studios.

Previously in Basilisk: Vanessa remembers the compound and when she was younger, when she and the others entered the cave and learned that one of them was destined to become the Chimera. In the cave is a rock formation of the Chimera surrounded by the five others who served as its senses. Those five did not survive their journey to Earth, and Vanessa finally understands that they were created to take their place. This most recent group of five is as close as the cult has ever come to being able to bring the Chimera back to life.

DESTINY AND THE UNEXPECTED

Basilisk #12 is the final issue of the story and as such, I do not want to give away too much of the plot. It is a smashing conclusion, though. Everything has come full circle. The story ends in the town where it all began for Hannah, in the town where her family was killed. I think one of the things that makes this such a gripping read is that the conflict is never between only two people. The main struggle for who gets to bring the Chimera back to life has boiled down to Vanessa, who meets that goal wholeheartedly, and Regan, who wants to make everything stop. The complication is Hannah.

Hannah was not raised at the compound and her only connection to the Chimera is through the Five, the ones responsible for the death of her family. She lacks the power to take them on single-handedly, but she does not lack the determination to do so and the fortitude to face them as hard as she can. She is the unforeseen variable in the equation. She made the uneasy truce with Regan that allowed them to dispatch three of the Five. She has also seen how with each Death, Vanessa or Regan are drawn closer to the Chimera. As Regan gains more powers, can she be trusted not to give in to her upbringing?

The writing is strong and succinct. Everything that happens has been built up by previous issues, so we do not get hit by any last-minute surprises out of nowhere. It builds up perfectly, ending in a conclusion that is as meaningful as it is satisfying.

Basilisk #12 takes place at night in a thunderstorm, which is solid symbolism for death and destruction. Barrett’s faithful have continued their killing spree. Death continues to afflict the town. Vanessa is in the middle of all this, calm and dispassionate. She is fascinating in the way she has such a powerful sense of her own personal destiny. Barefoot and wearing the standard outfit of the compound, one would not think she is as formidable as she is.

Barrett continues to be part of the story, and I would consider him the catalyst. He has given himself over to the cult of the Chimera. He wants Regan to be the one who brings the Chimera to life. His calmness is eerie. His belief runs deep to his core. His excitement at being there at the moment when it happens is curiously restrained, yet we still can feel how intense it is beneath the surface.

If you have been reading the series, do not miss Basilisk #12. It is thoughtful and gripping and finishes things up with great style and a powerful sense of closure.

Death and destruction come full circle – is this the legacy of the Chimera?