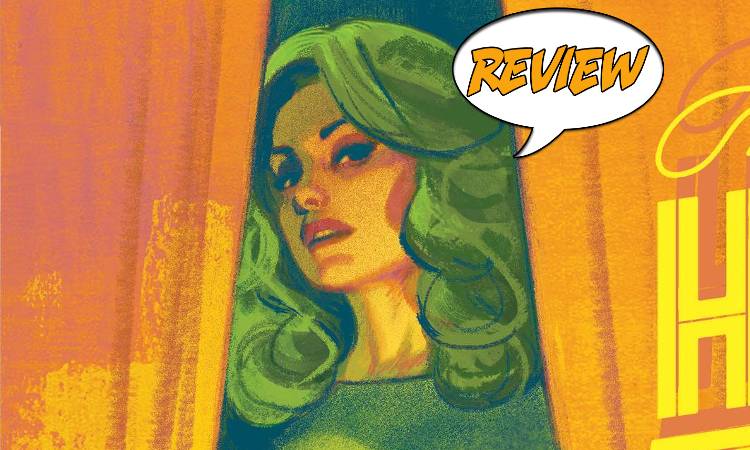 Christopher Chance has less than five days to live… and he’s stuck between Fire and Ice. Your Major Spoilers review of The Human Target #7 from DC Comics awaits!

Previously in The Human Target: Christopher Chance has only days left to solve his own murder. The intrepid detective might have met his match, however, when Fire smolders into his life. What secrets does this flaming femme fatale hold, and will the Human Target get burned?

After killing Green Lantern Guy Gardner with the help of his new lady friend Ice, Christopher Chance returned home to find her best friend, Fire waiting for him. This issue opens in a jazz club, where The Human Target finds himself the target of her considerable sexuality. Chance manages to fend her off, until they find themselves stranded at the top of a Ferris wheel together. Fire taunts him, with no way to escape, asking him point-blank if he wants to kiss her. Instead, he steps out of the gondola and falls to the ground, telling her that he wants her to save him instead. When wakes up the next morning, Ice is in his bed, and she informs him that they have a date. The whole seduction was a test to prove that he’s actually interested in her best friend, and now Fire has an important bit of information: While she did get the poison that Chance drank in issue one, she didn’t dose him with it, nor did The Martian Manhunter, or Booster Gold. But she knows who did.

The long break between issues hasn’t really hurt the narrative of this story, as we pick up with the same sense of urgency that the first half of the story gave us. I recommend taking a moment to read number six before you pick this one up, but even if you don’t, the tension of the first half of the story carries you through. The final page reveal is clearly a moment that will require some more explanation next time, but it makes for a shocker and implies that Chance really IS dead. Smallwood’s art is once again the real star of the show, with special praise to be heaped on the wide-angle shot of Chance stepping out of the Ferris wheel and falling through four panels into a full-page spread. The only moment better is the look on Fire’s face as she fails to slap Chance’s face, confidently smirking that he probably wants to kiss her now, wearing his jacket because she burned off her dress saving him. Smallwood’s coloring is equally brilliant, especially the soft-edged greens of BB’s hair and the encroaching sunlight throughout their “date.”

The first half of the series was a big deal last winter and this spring, and there was much worry that it wouldn’t be able to recover from the long break between issues, but The Human Target #7 is well worth the wait, proving to be as good as the first six, with the beautiful art and increasing storyline tension pulling together for another fine issue that earns 4.5 out of 5 stars overall. If the success of a comic is how well it pulls you in, then this is as much of a hit as the first half, and I’m really looking forward to seeing the mystery finally unraveled and whether Guy is actually, y’know… dead?

This issue complicates Chance's life, his romance and seems to imply that he really is doomed, but it's the beautiful visuals make it hard to worry that he's gonna die.