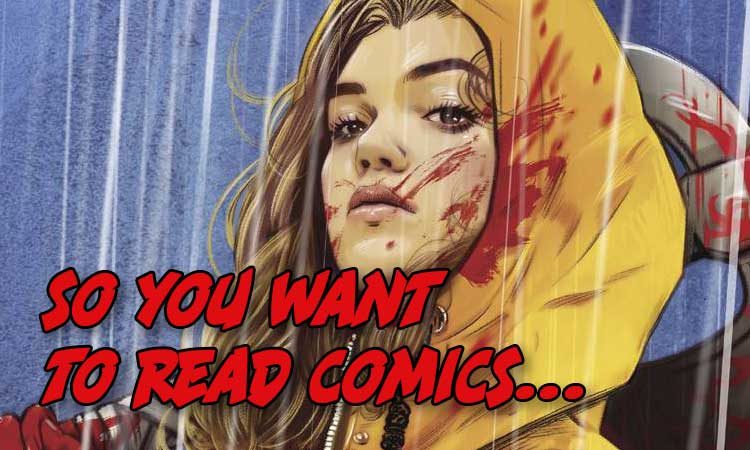 We’re taking a stab in the dark with this week’s “So You Want To Read Comics”.  This is our weekly feature where we take a look at a single topic or genre, then give you two comic book recommendations, perfect for new readers, based on that topic or genre.  This week we’re taking a look at slasher flicks.

While watching people pretend to kill each other for entertainment is something that’s been around since ancient times and there was no shortage of murderers in the early days of cinema, the genre really came into its own in the late 70s.  Movies like Black Christmas and Halloween would set the blueprint and establish the tropes that still exist to this day within the genre. Things like masked near-omnipotent villains like Michael Myers and Jason Voorhees, “the final girl”, punishment of immorality, and up-close brutal violence, all became hallmarks of this horror sub-genre.  Current slasher flicks often try to subvert these tropes and commentate on the films that came before, leading to new and entertaining entries.  But, the film industry isn’t the only place to indulge in some serial murder fun, comics fhave been pumping out slashers for nearly as long as movies.

Here are a couple of comic book series perfect for the slasher film fan.

It’s not often that serial killers have friends, it’s even rarer when their best friend is the FBI agent trying to capture them.  Yet that’s the relationship that Walter has, so when his friend is captured by a cult, Walter calls in every other serial killer he knows to take them out.  Vinyl is a unique take on the genre by both adhering to some of the tropes, but also acknowledging that they exist by utilizing the various killers as stand ins for typical killer archetypes. Vinyl also departs from typical slasher fiction by being set in a primarily colorful and well-lit setting.  It’s a fun series that leaves the reader confused about whether or not they should root for anyone here as the acts of murder become increasingly depraved and violent.  Vinyl is a self-contained series that ran for only 5 issues.  So it’s a quick read that isn’t currently tied to any other titles.

Basketful of Heads is the story of June Branch who is abducted by a bunch of killers.  But she happens across a magical ax that allows her to talk to any head she cuts off with it.  She then goes after the killers, using the heads she collects to guide her.  This series is a refreshing spin on the slasher genre, especially as it starts to become unclear just how real the things she’s hearing are, leading to a deeper dive into a serial killer than expected.  While this does get a bit more heady (get it?) than your typical slasher flick, there’s still plenty of bloody murder to tickle  the gore lover in anybody.  Now, while this is published by DC Comics, it’s part of an imprint headed by the writer of this series Joe Hill, so it doesn’t share continuity with the rest of the DC universe, so there’s no barrier of entry for readers.

What are some of your favorite slasher flicks?  Check out either of these recommendations? Let us know in the comments section below.