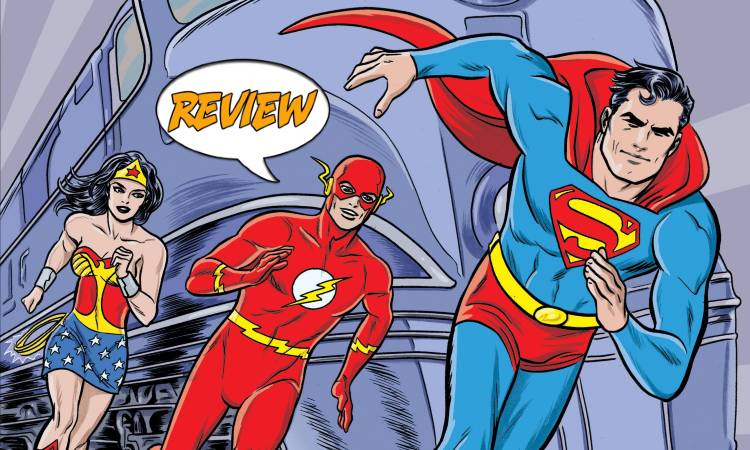 The Me Decade dawns and the Man of Steel gets pretty groovy. Your Major Spoilers review of Superman: Space Age #2 from DC Comics awaits!

Previously in Superman: Space Age: The world may love Superman, but the citizens of Metropolis are growing skeptical as the cities around them suffer without the help of the Man of Steel. The world doesn’t need saving as much as it needs changing, and Superman and his super friends in the Justice League seem unqualified to save the day the way they once did. Could this be the beginning of the end that Pariah prophesied?

Or is it just a sign of the times?

HOW TO SAVE THE WORLD

Our story opens in 1972, as Superman confronts a truly stereotypical ’70s exploitation pimp, then destroys an asteroid with his bare hands before facing the most terrifying threat he’s ever faced: A sit-down interview with Lois Lane. Lois confronts him with the armor-piercing question of what “one guy in fireproof underwear” can do against the greater evils of the world, and his answer is underwhelming, to say the least. Time passes, and the newly minted Justice League ends up being, in his own words, the world’s most expensive debate club. Batman gives up control of Wayne Enterprises to concentrate on street crime, only for new CEO Maxwell Lord to be an even bigger criminal. By the time Lois Lane’s coverage of Watergate breaks, the relationship between her and Clark has turned romantic, and his attempt to admit his secret identity when Nixon resigns is met with her telling HIM that he’s Superman and reminding him that she is an incredible reporter.

And then, Brainiac arrives.

MEANWHILE, AT THE HALL OF JUSTICE

The best parts of Superman: Space Age issue one were those steeped in Silver Age aspiration, but as the Bronze Age dawns, things get more complicated. Obviously, that’s part and parcel of the story being told, but my worries about Mark Russell writing Superman made that intentional shift towards a more adult worldview makes this a less enjoyable issue for me. In order to juxtapose the Man of Steel against the cynicism of the Me Decade, Clark’s small-town wholesomeness is amped up just a little bit too much, while the use of an armored Batman (who features in as many pages as the title character, by the way) for comparison seems a little too on-the-nose. Mike Allred’s art has also evolved with the times, giving both Superman and Lois a little more maturity and showing a grimier side of Metropolis, inspired by New York City of that decade. The tragic loss in the League doesn’t carry the weight that it should, partly thanks to a lack of focus on characters who aren’t Superman or Batman, and there are some odd Brainiac-centered moments that don’t land for me as well.

BOTTOM LINE: THE CYNICISM IS CREEPING IN

Even with multiversal confusion and a literal Legion of Brainiacs, Superman: Space Age #2 manages to enthrall and entertain, holding the story together as it covers most of a decade, losing a little bit of narrative focus but maintaining the killer visuals and ending strong, earning 4 out of 5 stars overall. It’s still a good Superman story, and I still hold out (you should excuse the expression) hope that it can end in a way that feels true to the character, but the encroaching darkness pulled the story away from some of what I loved about issue #1.

It's not quite as likable as issue one, as Mark Russell is an odd choice for a story explicitly about hope, but it's still an entertaining comic book.