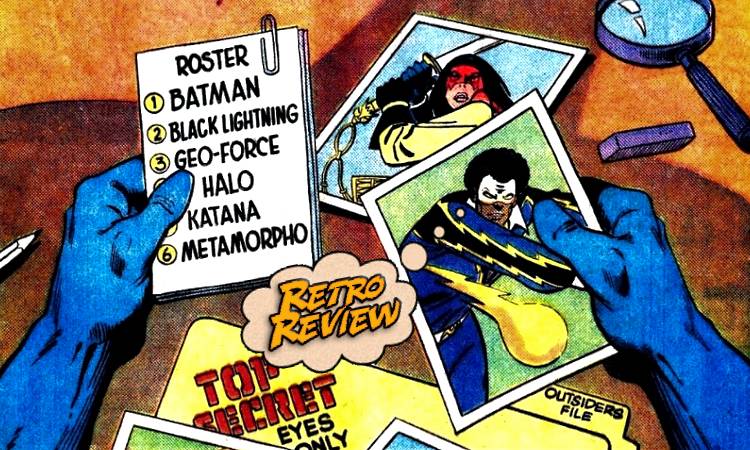 After years in the JLA, Batman found himself ready to found a new team of heroes… Are you ready for The Outsiders? Your Major Spoilers Retro Review of The Brave and The Bold #200 awaits! Previously in The Brave and The Bold: Kicking off in 1955, The Brave and The Bold was initially an anthology book featuring the likes of Viking Prince and The Golden Gladiator. The Justice League made their first appearance there in 1960, followed up by The Suicide Squad, the Silver Age Hawkman & Hawkgirl, and the Teen Titans. B&B was a very important title during the heady days of the ’60s as it transitioned into a team-up book, giving unusual pairings like The Atom and The Flash or Green Arrow and Martian Manhunter time to interact outside of the JLA. By 1967, it became a third Batman title, allowing the Caped Crusader to travel through the DC multiverse sharing the proverbial rub with lesser-known heroes. By 1983, though, the shine was off of anthologies, and even big team-up books with Batman and Spider-Man weren’t the sales juggernauts they once might have been, making #200 the final Batman crossover with random heroes.

Instead, he teamed up with a few SPECIFIC heroes. For instance, the young energy-based hero Halo, makes her first appearance in this issue’s final story. The first feature is a special Earth-1/Earth-2 crossover, allowing Batman to celebrate his anniversary in a way that admits that he was actually around in the forties and fifties. Halo’s appearance is to fight off a group of extremists trying to target a criminal held in Gotham City Hospital. She’s also not alone, as Silver Age DC weirdo Metamorpho joins her in protecting Mr. Miklos. Katana, another new hero, joins her, as does Black Lightning, whose comic was cancelled in 1979 and who had been mostly in obscurity since. You can say what you will about the original Black Lightning costume’s open shirt and enormous afro, Jim Aparo makes it all look incredible in action. Honestly, even with the aging of my personal copy of the book, the art has aged incredibly well, especially the action sequences. Mike Barr’s script has an extremely limited amount of time to show us the dynamics of the new team, but he makes good use of every panel. Aparo’s Batman is always A-Plus from me, by the way. The final member of the Outsiders is probably the one who had the biggest impact in-universe, though we aren’t made aware that he’s a literal prince of a European duchy in this short story. He does, however, get spotlighted as the team’s most powerful member. An explosion in the hospital brings a concerned Geo-Force running, only to find that his teammates and the man they’re protecting are all unharmed, thanks to the Fab Freak of 1,001 Changes! Thus, Commissioner Gordon, who began the issue concerned that Gotham City was falling to pieces, comes to realize that things aren’t as bad as they seem. The Brave and The Bold #200 is headlined by a nice, if forgettable, tribute to two lost eras of Batman, but it’s the debut of The Outsiders that drives the price of this comic, with Aparo giving us an amazing art job to launch Batman’s new team venture, earning 4 out of 5 stars overall. A lot of content from the early ’80s is only really enjoyable for those of us who were there and remember it nostalgically, but this issue truly holds up.

Barr and Aparo were clearly following in the footsteps of the New Teen TItans, but this preview story has aged much better than a lot of 1983's content, plus: BAT-MITE!