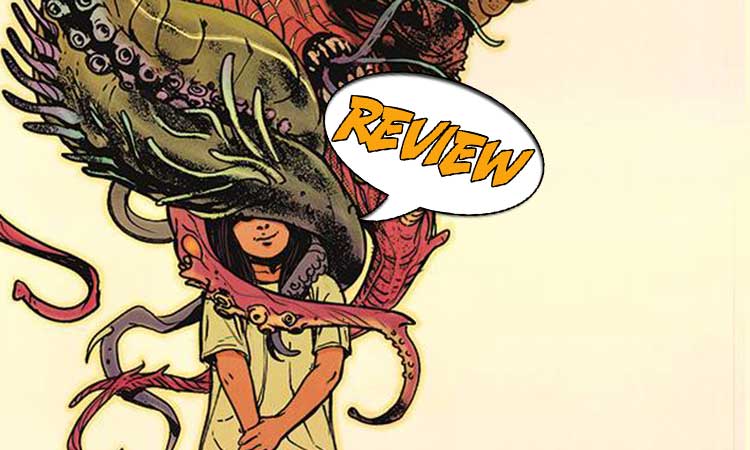 Monsters have invaded Earth, but only Lupe seems to be entirely unbothered by them. Who is she and what is her connection to them? Find out in Heart Eyes #2 from Vault Comics!

Previously in Heart Eyes: Monsters have invaded the world. Small enclaves of people, like Rico and his family, live in protected areas. But Lupe wanders into San Antonio by herself and starts exploring the ruins of the city. Rico grabs her and takes her through the tunnels beneath the city to his family’s compound. His sister (Nat) almost shoots her on sight. At night, Rico has nightmares about his mother being taken by monsters. Lupe wakes him before he screams and talks him into exploring with her at night. They have fun with no monsters in sight until Nat finds them and brings them back to the compound. Then an alarm goes off, and every one of their outside cameras show that the city is teeming with monsters.

FAMILY MADE AND FOUND

Heart Eyes #2 opens as Rico realizes that Lupe is outside where the monsters are. Nat cannot stop him. He has puppy love, and his every instinct pulls him out to where she is. And he finds her, unharmed and happy. And then she tells him she wants him to meet her friends. He is taken aback, especially when she says they will not hurt him unless he makes them. Sure enough, monsters manifest around her. Rico panics, screams, and runs. Lupe cries after him to stop, to calm down, not to make them attack. When the inevitable happens, we see she is not surprised. This is what always happens.

Lupe and her relationship with the monsters is crucial to the story and thankfully we get her back story. When she was little, she and her mother came to work for her uncle at his bookstore, or at least the man she knows as her uncle. Her mother is ill and passes away. Lupe is drawn to an arcane book he has. Later, when he performs a ritual involving that same book, she walks into the room and sees the pretty lights and colors of the monsters. They make a connection with her.

Her uncle takes both her and the book to a remote camp of cultists who consider Lupe to be their chosen one. They perform a ritual with her at the center, and the monsters start to come through a portal. She hears them and recognizes that they are hungry and that they are drawn by fear, but she does not seem to realize that she should be afraid for herself. Her uncle tries to pull her out of the ritual. When the monster turns against him, Lupe recognizes him as someone she has a connection with, and she orders it not to hurt him. The ritual is interrupted. The cultists are drained and the monster retreats. But one little monster remains, and Lupe treats it as a pet.

Later yet Lupe is older, but the world has not yet been invaded. She still works at the bookstore. A young woman named Mandy talks to her and asks if she could host her book club. She even invites Lupe to participate. The book club is a reason in part to discuss books, but it is also an excuse for young women and men to get together, drink a little, and spend time with each other. Mandy’s boyfriend makes a pass at Lupe and Mandy becomes furious. The monster hears all the hurtful things Mandy says about her and has some thoughts of its own.

GROWING UP IS HARD

One of the choices I find really interesting in Heart Eyes #2 is the coloring of the monsters. In this sepia-toned world, the monsters are light rainbow colors. I think this is not only a clever way to depict them as being from another dimension but also a way to show them as Lupe sees them. She has a connection with them through which she sees them as friends. She has had a traumatic upbringing since her mother died, so her understanding of love is doubtless affected. But this is also creepy because the monster’s connection with her so often involves physically enveloping her in its tentacles.

This is Lupe’s story, and it is fascinating to see her apparent joy and innocence contrasting with the horror of the adults around her who do know that they are dealing with monsters. The monster keeps Lupe protected so she can lead a sheltered and solitary life. When she meets young people and takes them at their word, she seems as trusting as a young child. After the book club meeting dissolves in drama, Lupe does not respond like someone who is used to dealing with this. To see how the monster works with her emotions is both touching and terrifying.

Heart Eyes #2 is a story that looks at fear in a way different than we are used to. I like that we get Lupe’s story here. Even if we do not entirely understand her, it helps to have some idea of what sets her apart.

Lupe has more of a connection to the monsters than anyone else realizes.