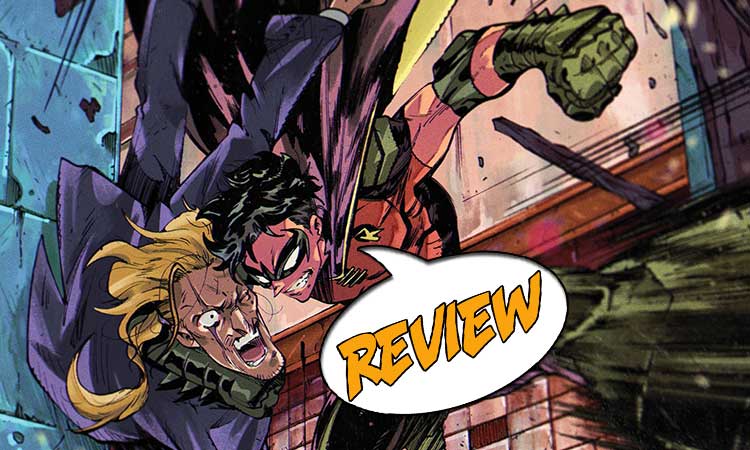 Robin has a new home, a new outlook on life, and of course, a new case to solve.  Your Major Spoilers review of Tim Drake: Robin #1 from DC Comics, awaits!

Previously in Tim Drake: Robin: After enduring an injury, Tim Drake has decided to leave behind his family and try and carve out a piece of Gotham City that he can call his own.

Tim Drake: Robin #1 opens with Tim alone in the marina where he’s surprised by the arrival of his boyfriend Benard.  The two go get some food, where they are informed by Tim’s neighbors that people are trying to evict everyone from the marina.  When he returns home Tim is visited by a vigilante acquaintance named Darcy AKA Sparrow.  It’s then discovered that the neighbors from before have been discovered murdered.  Robin and Sparrow, with the assistance of Detective Williams, begin investigating the scene.  Tim manages to put the clues together just in time for the culprit to arrive, a translucent orangutang.

GOOD UTILIZATION OF THE MAIN CHARACTER

Tim Drake: Robin #1 might not be the perfect jumping on point for readers, but it’s pretty close.  This issue takes the opportunity of putting Tim in a new setting with a new goal and utilizes it to introduce the character and establish his personality without the burden of being in a Batman book. Megan Fitzmartin also does a good job of giving Tim and his friends a challenge that can be solved in a uniquely Tim Drake way. Tim doesn’t actually throw a single punch in this issue, but still finds a way to approach the problem, it’s a refreshing scenario to see in a superhero comic.  .While the book is good about informing the reader about where to read up more about some of the references made throughout the issue, it makes the barrier of entry somewhat higher, which keeps it from being a perfect place to get in on this character.  The plot itself is nicely paced and moves from slice of life to superhero well and besides a slight cliffhanger at the end, is mostly a complete story which is always nice.

VISUALLY UNIQUE, BUT AWKWARD IN PLACES

The art in Tim Drake: Robin #1 is destined to be one of those, either you love it or hate, sort of situations.  It’s a departure from the more realistic approach to bodies and faces, and instead opts for a more malleable look that seems to correspond with what’s happening in the scene itself.  While I normally don’t mind a lack of detail for artistic purposes, here it goes a bit too far and leaves some background characters looking like amoebas.  Also, Tim’s head and face seem particularly deformed here, making him look very similar to a bobblehead.  As for the action sequences, the departure from realism gives these scenes a nice, sleek look that gives off the impression of there being a lot of motion and fluidity to the characters, which is an effective look.

BOTTOM LINE:  NOT A BAD CHOICE IF YOU’RE LOOKING FOR SOMETHING DIFFERENT

Tim Drake: Robin #1 takes a relatively old character and somehow puts them into a new situation without completely redefining the character, but also makes them accessible to those who might not be as familiar.  This book also allows Tim to be more cerebral and approach the conflict as a detective which is a refreshing change.  The art here is not going to be everyone’s cup of tea though but has some nice elements to it.  3.5 out of 5 stars.

Tim Drake: Robin #1 is a nice departure from the typical two-fisted action that the character typically gets roped into in other titles. Some of the art though is a bit too stylish for its own good.