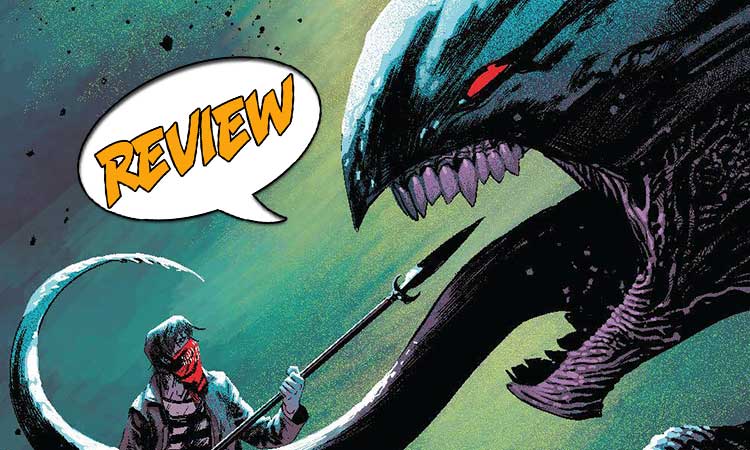 Edwin hides his feelings behind a mask of calm. Hermes begins to penetrate that calm. What likes deep within Edwin’s mind and memories? Find out in House of Slaughter #9 from BOOM! Studios.

Previously in House of Slaughter: Edwin has been sent to investigate a monster in a remote area along Lake Michigan. Hermes is agitated at the thought that there might be an enormous monster here. Edwin is strikingly calm and not afraid of this. Hermes does sense a thread of fear in him though, the fear of completing the task at hand. Edwin muses on how a monster who survives on fear live in such an area where people are few. Then he wonders if distinct kinds of fears taste different. He goes through his memories looking for a past case file that might shed some light on this, but those memories are particularly elusive.

A MAN AND A MONSTER IN A BOAT

House of Slaughter #9 is fascinating, although this is a story that can be difficult to grasp. The narrative is thoughtful and wrestles with complicated concepts. But the atmosphere undeniably fits in the story world perfectly and I do like seeing another take on the Mask/monster duo. Here we open on Edwin with his perfect recall frustrated that he cannot remember the particulars of a case where he can recall certain details. Hermes points out that if this case never had a file, there is nothing for him to remember. But how can Hermes know there was no case file?

A flashback takes us to Miami where Celia is called in about an unusual kid whose mother died. Celia is not too impressed when she looks at the boy with violet eyes – Edwin. His mother died after an earlier event in the pool, which we know from last week was a monster attack. Edwin was the first on the scene at her death, and the police report mentions his desecration of her body. That was when Edwin first picked up a brush, and the first blood he painted with was that of his mother.

Hermes takes up the story, and we understand that Edwin was on track with his musings. Edwin’s mother had a deep, abiding fear, but it was not the fear of grief, or death, or losing him. Hermes wanted to have that fear to consume forever. She is gone, but Edwin has memories of her, detailed and perfect memories.

The scene shifts to a dreamlike sequence where a very young Edwin remembers the monster he saw in the pool, a monster that just saved him from an Obscuratype. It knows that Edwin is with the Order, and it knows they will expect him to wake up with a monster inside something. It offers to be that monster for him, and in return, all it wants is to be able to consume his sadness and some of his memories of his mother.

Celia and Big Gary leave the area of Edwin’s ritual. Celia assumes he will not succeed. Edwin was odd but that does not mean he would have any talent as a Mask. But Edwin surprises them.

A NEW PERSPECTIVE ON THE PAST

The art of House of Slaughter #5 is atmospheric. The muted color palettes focus our attention on the power dynamics of the conversation. Hermes is a monster who can simply be physically monstrous but seems to get heightened delight out of being manipulative. Last issue, Edwin appeared to be on the cusp of understanding what was going on. Now Hermes is on the ascent. He appears as a glowing fly. There is a sequence as Edwin starts to put things together and Hermes as a fly grows gradually larger.

I also really like the sequence where Hermes sets up his deal with Edwin. It is a two-page spread of twenty-four panels which are all of Edwin’s face as Hermes talks to him. He goes through a range of reactions to Hermes’ words – fear, anger, hope, despair. In just a couple pages, the art captures the turmoil of a traumatized boy, and we understand how he has been set up and played all along.

BOTTOM LINE: CHILLING IN ITS STARKNESS

House of Slaughter #5 is not just a tale about Edwin’s place in the Order. It has turned into a tale of monstrous intrigue. Edwin has a different kind of deal with Hermes that gives us an entirely new and terrifying take on monsters.

In which we learn the terrifying truth of the relationship between Edwin and Hermes.