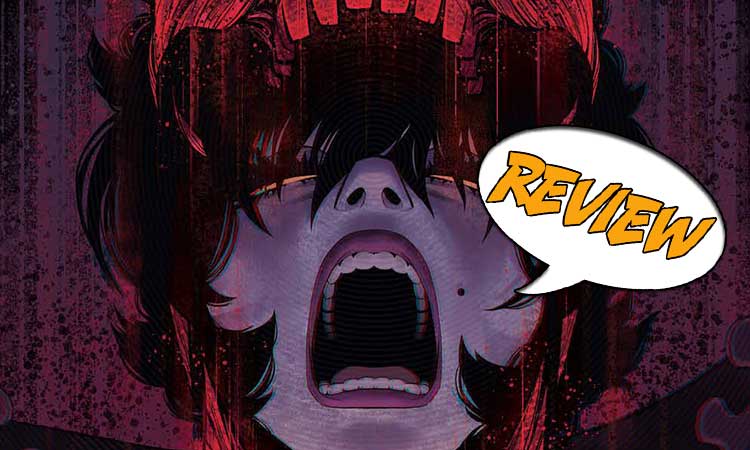 Jessica discovers she has more of a connection with Death than she had suspected. But when the End drops in, can she and her friends continue to hold him off again? Find out in Grim #5 from BOOM! Studios.

Previously in Grim: Jessica Harrow is a Reaper who cannot remember her own death and has lost her scythe. While fleeing the End, Jessica and her friends end up in Death’s abode. Death is missing, but his scythe is there, and she can wield it. She uses it so they can escape, and they end up in Las Vegas. Adira is furious to learn that Jessica escaped. Learning that Jess has Death’s scythe, she assumes Jess can lead them to Death. Death sends a message to Jessica giving her a hotel room number. Can it be that Death is hanging out in Las Vegas?

Grim #5 opens as Death gives us a succinct explanation of what is going on. People, he explains, think that Death and the Reapers relish their work. But he likes it because it is objective. Drama is something born of humans, but Adira brought something complicated into his life – sibling rivalry. She will do anything to take control of the Afterlife.

But along the way, Death has learned something about life itself, that it can be quite wonderful. Jessica realizes what we have already suspected. Death is her father. Adira is running the Afterlife currently as part of a deal between siblings. Death has banished himself on the promise that Adira will keep Jess safe. Jess’s mother was human, so Jess is something special. She really is someone who can move between the worlds.

With impeccable dramatic timing, the End arrives. This is the last straw. Death requests his scythe from Jess and leaves his self-imposed prison. The fight takes them to the casino floor. The End claims that Jessica upsets the balance, and she must be taken; Death will concede to him any souls but hers. It is a clash of juggernauts, and the only way it can end is with them both dying.

Adira arrives and blames everything on Jess, explaining that she was only trying to keep her safe. Eddie and Marcel stand up to her. She picks up Death’s scythe and uses it to strand them here in Death’s prison.

A FIGHT TO REMEMBER

I like that Grim #5 emphasizes Death’s new affinity for humans with his appearance as a regular guy abiding in his hotel room. There is something about his looking human that makes him more approachable as Jess’s father, and that reveal captures all the charm and awkwardness that one might expect. He even pats her on the head rather than hugging her. Throughout this, Jess looks stunned. Obviously, she has several questions that, it turns out, will not be answered here.

The fight with the End is stunning. The End’s weapon of choice is mystical chains while Death obviously favors a scythe. This is business, so Death’s face turns into a skeletal mask. He may be wearing flip flops and pajama pants, but with his scythe, he is imposing and plainly means business. The End tangles him up in chains and Jessica joins the battle even if it means fighting with her fists. But Jessica was his target all along. The End uses all his energy to turn his weapons on her and in a brilliantly isolated panel, Death imposes himself and takes the shot personally. It is grand and dramatic.

Grim #5 connects that abstraction of understanding a personified force such as Death and adding a human facet to his existence and the present conflict. Even so, there is still further mystery to uncover, and this is a glorious read.

Jessica Harrow learns that she does have a family...of sorts.