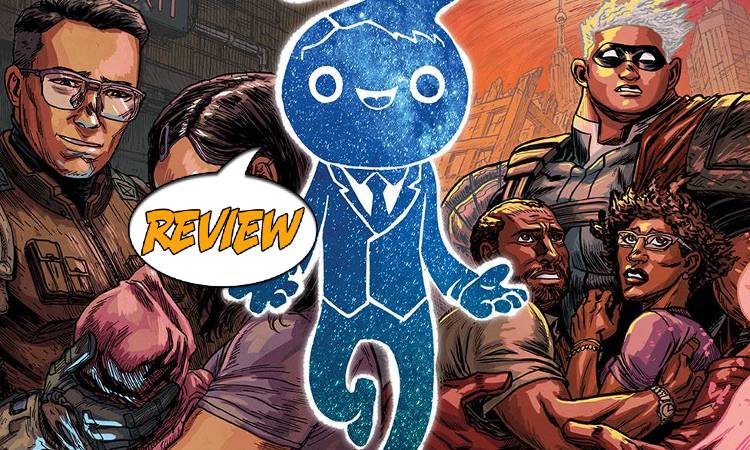 The first eight weeks after G-Day changed the entire world. What will the following months bring? Your Major Spoilers review of Eight Billion Genies #5 from Image Comics awaits!

Previously in Eight Billion Genies: In the eight months after G-Day, when everyone on Earth acquired a genie and one wish, the world has become a very strange place, full of danger and whimsy and… more danger? We need a hero for these times. We need…

SEVEN AND A HALF BILLION PEOPLE ARE GONE

As the last issue ended, all hell broke loose as a wish (or perhaps a combination of wishes) scoured the planet with nuclear fire, leaving only a few genie-powered encampments of safety. Robbie, AKA the super-powered Son Man, has been welcomed into the hidden world of Hope’s Hollow, where a strange young man named Floyd Faughn has created his own sanctuary. Strangely, Floyd seems to have MULTIPLE genies, thanks to a wish that people would only believe in him. Back in the Lampwick Tavern, his parents worry that Robbie has abandoned them, but the genies assure them that he hasn’t. Indeed, the remaining genies are very helpful throughout this issue, providing information, support, and actually making themselves useful. As the months pass, Floyd (AKA The Idea Man) is able to craft a wish so perfect, so ironclad that it rebuilds the entire planet WITHOUT bringing back the people who wrecked it in the first place. It’s successful enough that the survivors in the Lampwick are able to go their separate ways once more,

EVERY CHILD CHANGES THE WORLD

The birth of Wang and Lifeng’s daughter is probably the most important moment in this issue, narratively speaking, leading to a tense moment where the expectant papa threatens to kill Alex if he doesn’t wish for the health of his wife and daughter. I am sad to report, though, that the ever-expanding timeframe of this issue lessens some of my enjoyment, Robbie only gets a brief appearance in the issue, despite a reference to him being “trapped,” and while we get to see Wang’s angry threat, there doesn’t feel like much in the way of fallout from it. As the issue ends, our cast separates to the four winds with the promise that the next issue will cover nearly a decade. Ryan Browne’s art once again makes it all work, with big moments (like the design of the dome city of Hope’s Hollow) and small (like the mural on the wall of the bar) being rendered with equal skill. The emotions in the characters’ faces as they split up is excellent “acting,” showing a real mastery of moments big and small.

Even with my complaints about the pacing (which are, honestly, a deliberate choice that I have to respect as part of the premise), Eight Billion Genies #5 keeps the streak alive, with excellent art and a story that moves more and more into a macro view, without forgetting the small human moments that make it all work, earning 4 out of 5 stars overall. I also have to think I’m not the only one wondering about Ralph The Idea Man and where he goes from here, so I’m looking forward to the last three issues of this series.

There are a few questions raised here that we probably won't get to until the end, but it's an enjoyable read despite a feeling of distance from the story due to the amount of time that passes during these pages.