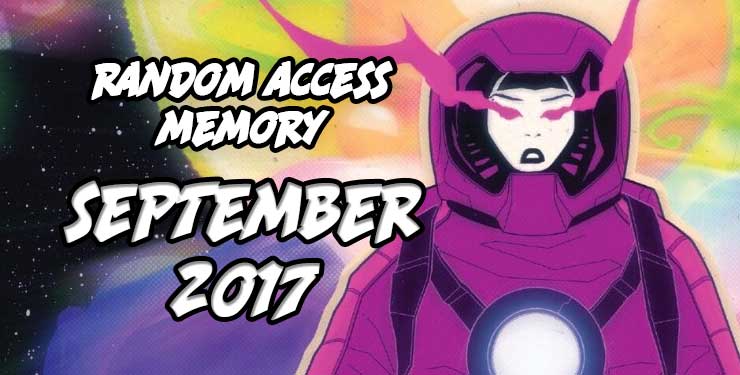 Rand Bellavia takes a look at his growing longbox, and reflects on comics released in September 2017.

Batman 30: The War of Jokes and Riddles Interlude: The Ballad of Kite Man Part 2 Kite Man’s whole thing is being lighter than air, but this issue gets pretty heavy. How heavy?  Kite Man tells his kid about the Myth of Sisyphus. And then they have a big laugh together. Within the larger story of a war for Gotham between the Joker and the Riddler, we learn that the Riddler killed Kite Man’s son.  This is pretty far from “Kite Man, Hell Yeah!” but King finds a way to bring us full circle. But (kinda) good news!  Kite Man was conspiring against The Riddler with Batman the whole time, so he gets revenge (sorta) and a measure of self-respect. This book — which tells you exactly what it is with its title — has a sequel that is just coming out now.  If you enjoy fun adventure stories with the absurd turned up to 11 you should be reading this comic.  (If, however, you’re the type who asks questions like “But why can the bears talk?” then maybe this isn’t for you.)

For all its silliness, this book has a huge beating heart, as demonstrated by this wonderful exchange between Suzie and our titular hero’s adoptive bear mother. We also get this surprisingly serious scene between Suzie and her former boss in the FBI. But don’t worry, you also get lots of bears — shirtless, fighting, and challenging your suspension of disbelief: Jeff Loveness just announced that he’s been tapped to write the Avengers: Kang Dynasty film.  This comes on the heels of his script for the third Ant Man film, which stemmed from his work on Rick and Morty.  But before all of that, he had a brief, glorious, and largely unheralded career as a comic book writer.  World Reader was his first creator owned comic, and this last issue is really something. After five issues of our main character chasing a mysterious alien being who seems to be destroying all life in the universe, she learns the truth. The idea that it is illogical to assume that God creates out of benevolence when we create out of need was first presented in comic book form by Grant Morrison during their Animal Man run, but Loveness really fleshes it out here.  Instead of presenting the notion — as Morrison did — as a fleeting thought during a peyote trip, here we have a character confronted with the reality of this image of God, then able to have a conversation with the Creator about it.

She even manages to give him a pep talk. Ultimately, this is a story of hope. In our moments of greatest doubt, even (especially?) the most creative among us look to our stories to give us hope.  Here it happens quite literally, as the creation gives the creator the perspective needed to carry on.  And who is to say that this isn’t the true meaning of life?

Endings don’t get more hopeful than this, people.  Seek out the work of Jeff Loveness.  It is life affirming stuff.

Other Comics I Read from September 2017