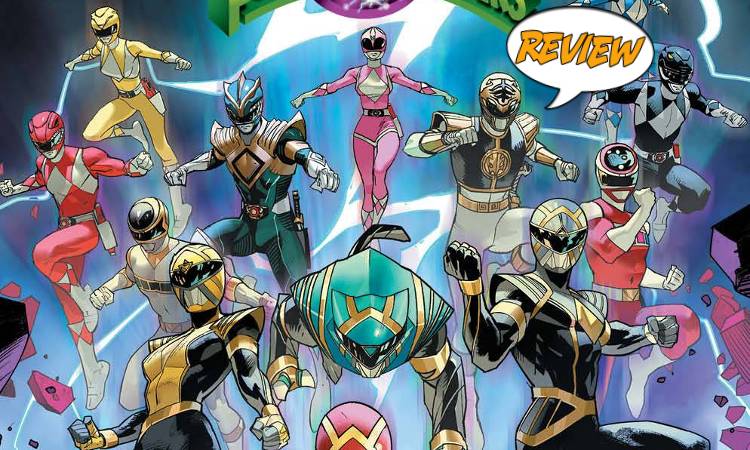 Previously in Mighty Morphin’ Power Rangers: News of a deadly threat reaches the team-one that threatens every Ranger and Earth, and even a home long since destroyed. As the climactic battle against unspeakable enemies unfolds, the lines between friend and foe blur, and difficult decisions await even the strongest of Rangers.

After the betrayal of Andros, the Red Space Ranger, the Death Ranger has seized control of all four Omega Rangers AND Silver Ranger Zhane. Andros fled his home planet, but didn’t miss the revival of its dead population as a zombie horde under Death Ranger’s control. The Mighty Morphin’ Rangers aren’t sure if they can trust the alien hero, but Andros manages to convince them that not only is he aware he messed up, but he’s willing to sacrifice himself if it means saving his best friend and the Omegas. The team teleports to KO-35 and meets their friends in battle, with Blue Ranger Billy trying to use a new weapon to sever the Death Ranger’s control of their friend, while Death Ranger explains that they are now able to do anything they wish. Tommy the White Ranger meets them in one-on-one battle, forcing Death Ranger’s hand and causing them to break Zordon’s one rule: Never escalate the battle unless your enemy does. In a last-ditch attempt to fight off the undead Ranger, Andros and Jason are forced into the Morphin’ Grid, seeking solace in Jason’s memories… but Death has followed them.

FOR THE LAST TIME?

So, to address the elephant in the room: This issue costs TEN DOLLARS. That’s a lot to pay for forty pages of comics, no matter how big or how well-done they are. The previous issue of this crossover was $7.99 for exactly the same amount of pages, and that felt like too much, so this issue’s increase doesn’t feel entirely justified. That said, it’s a highly successful comic issue and is even more impressive as the end of Ryan Parrott’s Power Rangers run, providing closure on a number of plot points dating back to the beginning of the BOOM! run. Matt the Green Ranger gets to go to space for the first time, Trini’s growth as a hero and a leader, the life of alien orphan Journey, and several other points get addressed, and it feels like they all have time to breathe. The return of previous artists Mortarino, Mora, and others are wonderfully handled as well, with the original creators handling flashbacks to points in Jason’s life that they originally drew. As the story draws to a close, we have radically reshaped the Omega Rangers, altered the status quo for the Mighty Morphin’ team and left the heroes in a position where they could literally go anywhere under their new creative team(s)

When I balance it all out, Mighty Morphin’ Power Rangers #100 has to overcome the heavy real-world weight of its $10 price point, but does so by smartly working with multiple artists, playing out unexpected tragedy, action, and humor skillfully, and ending the story without destroying the mystique of the new heavy, earning 4 out of 5 stars overall. This book gets so many things right that I can almost get past the exorbitant price… almost.

Parrott's big finale pays off on a number of ongoing plots, including some surprising roster changes, but the price tag is hard to get past.