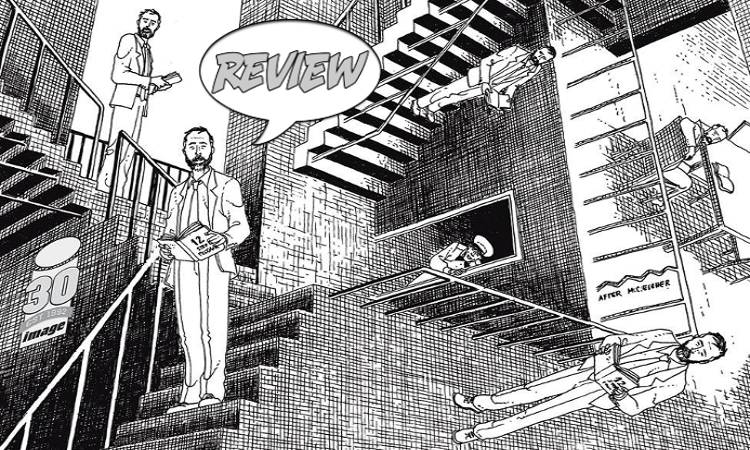 Thanks to the Cassandra Rehabilitation and Detox Center, Doug’s gonna try real hard to get and stay sober. Your Major Spoilers review of Ice Cream Man #32 from Image Comics awaits!

Previously in Ice Cream Man: Sometimes, writing the “What Has Gone Before” section is difficult, but it’s never more so than with a book like this. The basic gist is that there’s this dark force in the universe that manifests itself as a seemingly innocent purveyor of sweets but is in fact a multi-limbed monstrosity of cosmic unpleasantness. Whether that’s garden-variety body horror, existential angst, fear of the abyss, or just plain ol’ nightmares varies.

So, what’s the flavor of the day?

TRY TO MAKE AMENDS, FOR ALL THE GOOD IT WILL DO

The flavor of issue #32 is… DESPAIR! This issue begins with Doug Metsker’s first day of drug and alcohol rehab as he “admits he has a problem” (which is to say, runs screaming from the facility trying to escape). The second day includes a failed attempt at self-harm, followed by two whole days of vomiting, reminding us all that this is a book for Adults Only. Doug’s shame and fear increase as he is given medication (which regular readers might recall from the harrowing Ice Cream Man #30) and deals with his wife and daughter, Ginny. It’s Ginny who becomes the focal point of his recovery after she draws a sweet portrait of him as a superhero, but his doubts continue. Doug relapses at least once, while the other people in his recovery group leave (and in one case, immediately return) to deal with the real world, and his doubts about whether or not he can actually finish the program continue to mount until the final page…

Regular readers will know that Ice Cream Man is a favorite, but this issue adds a new wrinkle to the horrors of previous issues, perhaps the most dreadful thing this book has ever presented: It ends on a positive note. Worse still, it’s an AMBIGUOUSLY positive note, as Doug spends the whole issue worrying that he’ll relapse and that his life will collapse once again, only to leave The Cassandra feeling good about himself. In some comics, the dedication of two pages of story to a fade-to-black might feel like a waste of space, but Morazzo’s art is so good and so packed with details in every panel that it’s an absolutely masterful final moment. Playing off the doubts of our main character fills every page with subtle fear, building on bits and pieces of previous issues, even bringing in the title character as Doug’s driver. The payoff ends up being no narrative payoff at all, and I have to say, I love it.

BOTTOM LINE: A HARD READ, IN THE GOOD WAY

As always, there are a number of moments in Ice Cream Man #32 designed to disturb, to revolt, to draw out your deepest fears, but somehow seeing Doug’s hopeful face without his shadowy counterpart destroying his life is more terrible than any actual horrors could, making for a (you should excuse the expression) dead-solid 5 out of 5 stars overall. One of these days, I really need to start mapping out and cataloging the callbacks, returns, and running gags of this strip, if only so that I don’t feel like I’m missing out.

After nearly three years of downer endings, we get an uplifting one AND IT'S THE MOST TERRIFYING THING I'VE EVER READ.