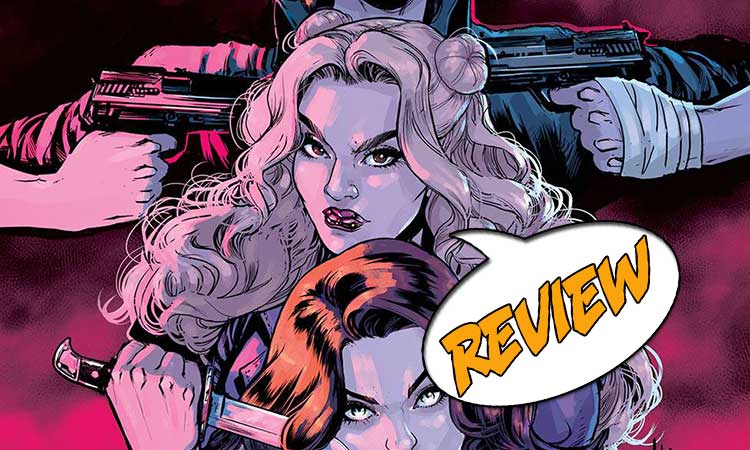 Violet, Rose, and Poppy meet with the police for questioning about their mother. They all have secrets about their past, but will Jasmine’s death mean those secrets will be uncovered? Find out in The Deadliest Bouquet #2 from Image Comics!

Previously in The Deadliest Bouquet: Jasmine Hawthorn is found murdered in her flower shop. Her daughter Rose calls her sisters, Poppy and Violet. The three women – Responsible Rose, Princess Poppy, and Violent Violet – do not immediately get along, and Poppy and Violet may not have gotten along with their mother. However, they are determined to figure out what happened to their mother. Violet goes looking for the gang who was extorting money from Jasmine. Poppy returns to the family home and has a flashback to their father’s death.

WOMEN WITH A VIOLENT PAST

As The Deadliest Bouquet #2 opens, we learn more about the Hawthorns’ past. The three girls hide in the attic as their parents fight. Their father, Lionel, abused Rose and she told her mother. Jasmine challenges her husband. He hits her, and she turns the fight back on him.

Back in the story’s present, Rose finds the shop ledger her mother had kept hidden. It is a mess. On one day, the numbers are legible and make sense; on another, there is nothing but gibberish. Poppy is astounded. Rose reminds her that Jasmine was having problems with headaches, paranoia, and fear of the gang. Then Poppy notices that their Grandmother Dahlia’s gun is missing. Dahlia took the gun from a Nazi during the war and all three girls learned how to shoot with it.

But they must meet with the police, and Violet never returned home last night. That is because she spent the night beating up the gang. At the police station, Poppy ignores phone calls from her husband, and Rose starts getting concerned about her. They are taken in to talk with the detective, and another officer brings in a handcuffed Violet. He asks them about their mother. Their words are benign, but in their memories, we see that she put them through serious combat training.

They do mention that she had an unorthodox childhood. Her brother died when they were young. She moved around a lot from one country to another. The girls’ father is mentioned, and they only say they have not seen him in twenty years. The detective asks them about the day before the murder. Rose was at the store, and Jasmine was in the back room and was more paranoid than normal. Poppy says she was at a Valentine’s dinner with her husband but does not discuss that they were having a fight. Violet says she was modeling in Europe but does not admit this involved killing someone.

Officer Gutierrez interrupts. She has the autopsy report and the ballistics report. When the detective returns, he asks the women if they know anything about encephalitis. Some of the symptoms are similar to Jasmine’s behavior before her death. But she was also shot, apparently with an antique gun the same type as Grandma Dahlia’s gun. Not only that, but that gun may be linked to an incident from twenty years ago.

The Deadliest Bouquet #2 features a couple fights that are short but brutal. They are fairly well choreographed, but I think their purpose is to demonstrate just how dangerous these young women are. It seems clear that Jasmine killed her husband, and from last issue, she and her daughters buried his body, and he was never seen again. Violet brings just as much force to a fight but with a touch of recklessness, insinuating that her childhood hardened her to extraordinary levels of violence.

The focus is on the people, and that is a great way to handle a mystery story such as this one. The backgrounds do feel sparse at times, especially at the police station where the hallways and rooms are generic. Jasmine’s study, with its bookshelves and boxes of packed-up paperwork, feels incongruous in its relative detail. Still, the focus is on the characters. As we learn about Jasmine’s complicated past, it is the characters we must follow.

The Deadliest Bouquet #2 is ambitious in that the plot appears to span decades and the main characters continue to be quiet about their family secrets. Consequently, this limits the ways we as readers can be filled in. Some moments feel contrived, but overall, it is an interesting mystery to follow.

Rose, Poppy, and Violet continue to investigate their mother’s illness and her subsequent murder.