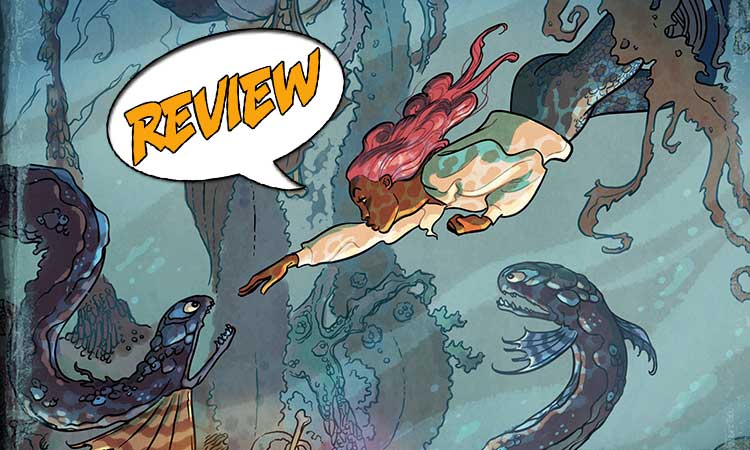 As fairy tales run amok affecting people’s lives, Chelsea and Olympia are in a desperate race to get everything back under control. Will they be able to dispel Jeter before anyone else is hurt? Find out in Rivers of London: Deadly Ever After #4 from Titan Comics!

RIVERS OF LONDON: DEADLY EVER AFTER #4

Previously in Rivers of London: Olympia and Chelsea inadvertently break an enchantment in the woods. Fairy tales begin to come to life, with modern twists, but soon they begin to become deadly. Tracking down the writer of a fairy tale book, they find Phoebe and learn that her ancestor, Jeter, had connections to the fairy folk and believed in happy endings. His spirit was released when the enchantment broke, and he continues to cause chaos!

CAUGHT IN A FAIRY TALE

We have seen how close Chelsea and Olympia are, but as Rivers of London: Deadly Ever After #4 opens, they are apart for the first time. Chelsea is attacked by giant river eels that are under the control of Haley. She has been put into a role in the Little Mermaid, and she is bound and determined to take Chelsea’s voice from her. Chelsea has no intention of giving up her voice but being strangled by eels leaves her no choice but to sing as Haley commands.

Olympia braves the lion’s den and asks Bev for help. She tells her everything. Instead of being mad, Bev is merely surprised that it has taken this long for something like this to happen. She orders Olympia to stay and watch the twins. Olympia knows that this makes the most sense, but she feels compelled to help. She calls Peter’s mom and asks her to babysit.

Olympia meets Phoebe and they come up with a plan to dispatch Jeter. The trouble is that they need him to appear. Phoebe pretends to need help and that is not good enough. Olympia talks her into jumping off the bridge. At the last second, before she strikes the water, Jeter appears and pulls Phoebe to safety. Olympia shoots an arrow with him as planned, but this time Phoebe pushes Jeter out of its path.

Phoebe has her own plan. She believes that she can harness Jeter’s powers and use them to dismantle unjust systems. Olympia warns her that she might not be able to control him. Indeed, he seems intent on trying to bring Olympia under his control. But then Bev, who did rescue Chelsea, arrives with the eels. Olympia hands her arrow to Chelsea. Pheobe distracts Jeter and Chelsea takes the shot, sending him back through the portal.

Life returns to normal for all the people affected by the fairy tales. We may think that Chelsea and Olympia are the heroes, but Bev thinks they still have some lessons to learn.

THE MAGIC OF RIVERS

The art of Rivers of London: Deadly Ever After #4 is terrific. The eels are sinuous and terrifying, and the story sets them up so the panel where they drop Chelsea before Haley is a natural match for the Little Mermaid illustration in the book. When they twine around Chelsea threatening to strangle her, they are convincing. But it is even more fun when they make their reappearance with Bev and Chelse riding them. Bev is the last resort, and for good reason, and I think she is a wonderful, no-nonsense character.

There are some wonderful character moments as well. When tracking Chelsea down, Bev must travel other rivers which means taking the time for some diplomacy with the river god, such as that of the Medway. River gods do not all have the same appearance or behavior quirks, and Medway lives on an old boat and is fascinated by the native fish.

Rivers of London: Deadly Ever After #4 is a dramatic end to a charming story that fits well into the broader world of the Rivers of London series. It is a delightful way to spend time with minor characters and still enjoy a world where magic has a significant presence.

Rivers of London: Deadly Ever After #4

One thing leads to another, and Chelsea and Olympia find themselves in over their heads!