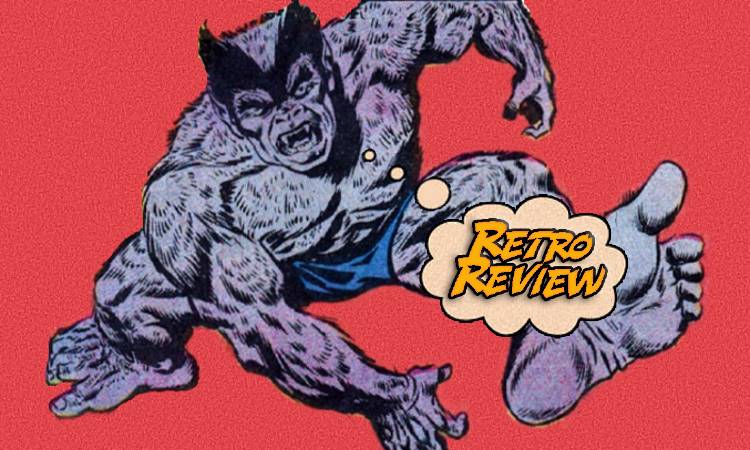 X-Men aficionados may recall that the bouncing blue Beast wasn’t always covered in bluish fur. But you might not remember HOW his hirsute transformation occurred. Your Major Spoilers Retro Review of Amazing Adventures #11 awaits! Previously in Amazing Adventures: One of the rare homo superior characters whose mutation had a clear source, Henry P. McCoy’s father worked in a nuclear power plant and was exposed to massive amounts of radiation during an emergency. Young Hank was thus born with a muscular, almost apelike physique, as well as enormous hands and equally large prehensile feet. As a founding member of the X-Men, the Beast took on the role of team strongman, but with the twist that he was also the most intelligent member. Indeed, it was his intellect that proved to be his downfall…

This issue opens with a security guard being stalked by a hairy creature in the shadows, a standard horror story setup. But things are NOT what they seem. This night watchman is in truth, the criminal, while the monster in the shadows is The Beast, frustrated that his attempt to play hero again led him to reveal himself for no reason. Returning to his lab, Henry McCoy panics when he sees the time, realizing that the delay may have sealed his fate. Frantically, he scans his strange, new body (described explicitly by the second-person narration as having silver-black hair rather than the blue that would come to define The Beast), finding that it’s too late. His new metamorphosis is permanent, locking him in the coarsely furred form forever (whatever that means in comic books). It’s always hard to believe that The X-Men were ever cancelled, but their title had been presenting only reprints for two years at the time this issue hit the stands. This is one of the earliest stories explaining what happened during their hiatus, showing us Henry McCoy finally leaving “high school” for a job at the Brand Corporation. (The rest of the team was keeping a low profile, we would later be told, thanks to the fallout from a battle in Las Vegas back in X-Men #66.) His new gig constitutes the first appearance of the corrupt and villainous Brand Corp., an entity that would later be responsible for villains The Modular Man, Mad Dog, and Will O’ The Wisp and by extension, the death of Alpha Flight leader Guardian. Of course, none of that is clear here, as it just looks like a nice research facility where McCoy can continue his goal of unraveling the secrets of the mutant genome. Within a few weeks, Hank has identified and synthesized the hormone responsible for mutation, But his corrupt colleague sells him out to unidentified evil spies, circling back to the beginning of this issue’s story, as Hank decides to drink the serum (which Legion Clubhouse fans may remember as also being the origin of Bouncing Boy, sort of) and bring down the people who would steal his scientific breakthrough, only to take too long in getting back. Full of rage, the new Beast uses his enhanced powers to find and attack his rival, driven to the brink of murder by the loss of his humanity. Marvel’s art during the Bronze Age is sometimes a sore subject for me, as so many artists seemed editorially mandated to look like John Romita, with only Gil Kane (who handled this issue’s cover) allowed to deviate from a house style. Tom Sutton (best known for co-creating Vampirella) was working in a wild, expressive style at this time, but the inks of Syd Shores (once Marvel’s art director) are the furthest thing from experimental. The combination of their styles is just plain weird which, combined with a strange choice in hairstyle for our main character, makes for some bizarre panels. Even so, Conway’s vivid (and, admittedly, florid) second-person narration makes for an exciting read, giving The Beast the hook that would help define his character for the next 25-odd years. Amazing Adventures #11 is an example of the big swings that Marvel Comics as an entity was taking during the early ’70s to keep their rep as a startling, young upstart company, with an excellent story combined with freaky art for a still-better-than-average 3.5 out of 5 stars overall. This run would lead to Hank’s becoming an Avenger down the line, then reshaping The Defenders before returning to the X-Men with a splash. His ever-evolving mutated form has become the character’s main theme, but it’s still entertaining to see how it happened the first time.

The art is more than a bit dodgy, but the story is a young Gerry Conway doing clever stuff that helps to overcome the odd Sutton/Shores team, making a very memorable issue.