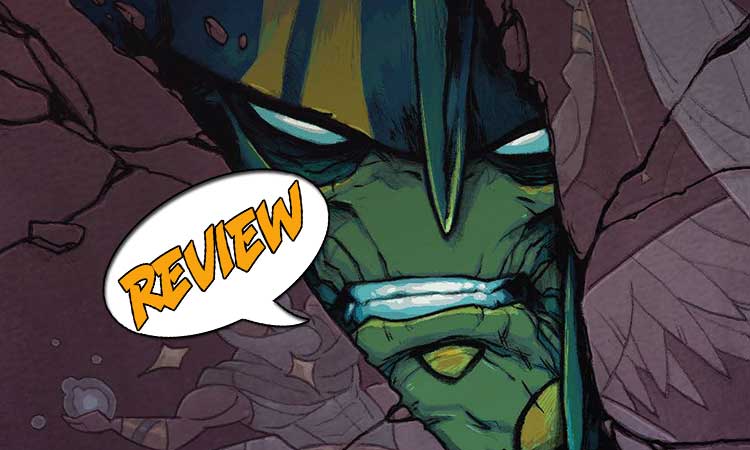 When Bastian’s father is arrested, Wynd and his friends must change their plans. Their journey will be more difficult. Are the Vampyres still after them, or is there a new and unknown foe on their trail? Find out in Wynd #2 from BOOM! Studios.

WYND: THE THRONE IN THE SKY #2

Previously in Wynd: The Throne in the Sky: We rejoin Wynd and his friends, now including Yorik’s cousin Bastian and his friend Teek, as well as the Faerie Merian. The humans of Pipetown have forged an alliance with the Vampyres, who are playing their own game. The Vampyres attacked Escalion while making it look like the Humans were responsible. The young people are on the run trying to reach Bastian’s father, the Duke. At an inn, they hear that General Eks is raising an army to march on Pipetown. The Duke still dreams of a united and peaceful Esseriel. Instead, he is arrested!

A SUDDEN CHANGE IN PLANS

As Wynd #2 opens, we see Meriel returning to the group with supplies and news. Essendiel has always been peaceful, but now Humans are being taken to detention camps outside the city. She tells Bastian his father has been locked up. Bastian wants to set him free, but Meriel advises again it. Yorik understands that his strategic value is high. Bastian then suggests that Wynd can turn himself into a giant monster again. Isn’t that what the prophecy says? Wynd does not want to be ordered around and again, Meriel is the voice of reason. They need to shift their route and get to Northport and the Duke’s allies.

Yorik realizes that Meriel is shaking. She denies any problems, but Teek tells him it is winter, and Faeries are not built to handle the cold. I like that Yorik is starting to be more concerned with the others around him. She is also terrified of being found by General Eks.

The scene shifts to General Eks, who is as formidable as the Bandaged Man. As he tortures a captive, he talks about his meeting with a preacher who told a story about the Winged Ones in the past, and how they were going to return. He waited for them, but they did not show up, not even when Vampyres attacked and killed his family. He decided to bring peace to Esseriel by the sword. He has heard tales of people seeing a child of Winged Ones and demands to know if this is true and where he is.

Duke Yadriel is being held captive in a detention camp along with some of his people. He wants to know if his son and his nephew are still alive. They have a surprising amount of information about the young people, the attack on Escalion, and possible connections to Pipetown, although his advisor thinks it seems more likely the Vampyres were involved. They have also found someone who claims to know more – Basil!

Basil and the Duke are old friends, and Basil gives him the details of Yossar’s alliance with the Vampyrium. Basil was sent by the Queen to warn the Duke, but one of his companions betrayed them to Yossar who sent soldiers to bring them back. In the skirmish, they were overheard by the Faerie Guard who arrested them. The Faeries also believe that the young people were the instigators of the war. Yadriel decides they need to escape to find the kids before Eks can.

Meriel talks to Wynd. She will need his help as they reach higher altitudes because she will no longer be able to fly. Wynd, still adjusting to the fact that he now has wings, is also upset that she is putting pressure on him as though he is a hero and not just some kid. But she has been around Weirdbloods all her life and has never seen anyone like him, and she has seen a ruined city with statues that look just like him. She thinks he is special. But she also agrees not to use him to influence people. If a time happens where that could be useful, she will let him make the decision.

As Wynd #2 heads into more serious territory, the young people start to mature. Life for them is no longer carefree, and there is no easy way for any of them to return home. We see this in most of them, and I particularly like the way it is drawn in Wynd. He no longer hides his ears, but he is still small in his human form. His eyes seem bigger and even though he has special abilities, he also seems more withdrawn. It makes him look like he is still coming to grips with the change. It is not just a matter of the fun of flying. When Yorik teases him about becoming a monster, he insists he is not one even while he changes form and honestly looks terrifying. We see that is one of the things that he exactly fears. The other, of course, is the fear of being responsible for saving the world when he has no idea how to do that.

I particularly like the nighttime scene where Merial and Wynd have their heart-to-heart. As flyers, they can both perch on a high tree branch, so from their vantage point, we see far below the lights of a trail of refugees trying to escape the coming war. It is a subtle reminder of what is at stake in the world these young people know. Even as they have dreams of future peace, the present is changing so fast it seems like those dreams may slip away like dandelion seeds drifting in the wind.

Wynd #2 is a grand fantasy tale of fellowship that lets us see the fears and misgivings among the young people who find themselves in the midst of everything. The world building is superb, and I like how, as a double-sized book, we have enough time to learn and understand the cross-motives that everyone has.

Wynd: The Throne in the Sky #2

Bastian and Yorik’s plans change once they realize Yadriel has been imprisoned, and Wynd worries about being seen as the legendary savior of the world.