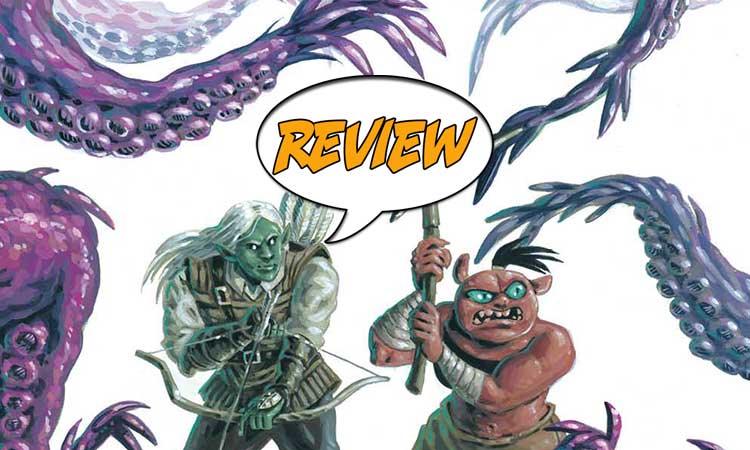 An evil spirit is on the loose. An Elf, Daniel, wants to track it down, but instead, he meets Pez. Can the two of them together figure out what is going on? Find out in Orcs! The Curse #3 from BOOM! Studios.

Previously in Orcs! The Curse: The crow people, Carn and Mori, decide to stay with the Orcs over the winter. Granny makes a mysterious potion in her sleep. She also decides now is the time to teach Utzu about magic. Meanwhile, Pez feels like she has nothing useful to do. She steals the mystery potion and gives it to Bog. It makes him fart, but it also makes him irresistible to women. He leaves the cave with Zep, hoping to hide out in the Dwarf city for a while. Granny makes an antidote and travels with Utzu and Sprog to find Bog. Pez wants to help but is left behind. She feels like nobody wants her around and heads off on her own.

Orcs! The Curse #3 opens with Elves gathered around the Mother Tree, singing for midwinter. Daniel and Leonard come running with news of an evil entity. Daniel thinks they need to find out more about it, but Mother Tree forbids anyone from leaving their woods.

The antidote worked to stop Bog’his farts, but freed a spirit contained within the potion. Granny goes into a trance to figure out what to do. Utzu has a bad feeling about this. But she and Bog have no idea how to hunt down an evil spirit.

Daniel and Leonard share guard duties around the woods, but Daniel still feels he must track down the evil spirit, even if it is against Mother Tree’s orders. He leaves to search for it. A day later, the trail has gone cold, and he starts to question his decision. Then he catches sight of Pez sitting on a boulder. He readies his bow for an attack and quietly walks closer. When he realizes she is crying, he greets her instead, startling her. They rapidly realize that neither of them was hunting the other, and Pez decides to team up with him like Drod, from her favorite story, teamed up with an Elf for a quest. She insists she is a seasoned adventurer.

Utzu delivers a potion to Carn and Mori. They have not seen Pez. She finds Bog who also has not heard anything about Pez yet. He is getting ready for story time. It picks up with Drod and her friends in a gloomy wood feeling as though they are getting close to the source of the pestilence. They are threatened by some Orcs for no apparent reason, until they flee. Drod and her fellows find themselves at the entrance to a cave of bones. Inside there is a masked necromancer who has cast a spell on the Orcs, who were of Zamma’s tribe, and who is also the source of the pestilence. There is a fight, some monologuing, and the necromancer slips away, leaving the story on a cliffhanger.

Daniel and Pez continue their search for the spirit. Daniel has never wandered this far away from his home wood. Pez is full of stories about her explorations. They continue to chat, and it comes out that neither of them seems to get along with their families right now. Pez learns that Mother Tree really is Daniel’s mother, and although she was once an Elf, she is now a tree. He talks about how his grandmother tree perished in a pestilence. His mother battled that blight, but when she returned home, she was the last of her kin and became the Mother Tree.

Granny travels to the Astral Plane where she talks with a friend of hers – the Mother Tree! And Granny is Zamma, an Orc from the Drod story. She had been guarding the necromancer’s mask for centuries, but now the spirit has escaped. Wendy and Zamma get into an argument and Wendy stalks off.

Daniel and Pez find a creepy tower surrounded by dead things. A woman appears in a window above them and claims to have been trapped by an evil witch. Pez claims this is a trap. Daniel does not believe her. The woman throws down a rope and tells them to climb up. Pez asks why she cannot simply climb down. I adore this take on the Rapunzel story, and of course it is a trap. Pez is seriously injured, and the only way to heal her is magic from the Mother Tree.

A RICH AND HUMOROUS WORLD

The art of Orcs! The Curse #3 is fun and lively. I like the little glimpse of Elf life that we get at the start. We see the Mother Tree before we understand who she is. She is an enormous tree, but she also looks like she is sitting in a pool of water and her roots form the shape of a lap. Dark liquid flows from her trunk into her lap and into the pool. The Elves can swim in it comfortably even though it is the middle of winter.

I really like the Astral Plane. It makes me think of taffy being pulled with its smooth shapes that look random and like nothing on earth. They are bright and colorful against a background of dark sky filled with glowing stars. It is the perfect place for a mystic to travel to, but I loved discovering that this is where Zamma goes to communicate with the Mother Tree, a shared space both can reach. The place responds to their emotions, changing shape and flow and the tensions get high.

Orcs! The Curse #3 has settled into an interesting tale. I enjoy seeing how the problems in the present tie in with the stories from the past, and I appreciate the way Orcs and Elves have their own cultures but are also rich in personality quirks which brings a lot of humor into the book.

Pez meets a new pal and her adventure takes a turn for the worse.