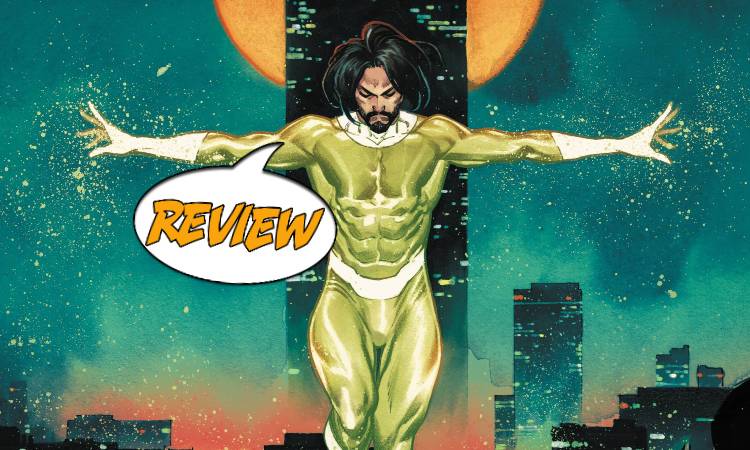 David Kim and Kelly Vu are now one being, laced with nanomachines that can reconstruct anything they interact with. What would YOU do with the power of a god? Your Major Spoilers review of Duo #5 from DC Comics awaits!

Previously in Duo: What do you do when bestowed with the enormous powers of a god? Do as gods do! David and Kelly flout enemies and allies alike to reveal themselves to the public and heal the sick and suffering with their nanobot technology. But inside their shared body, David and Kelly are at war for control. With a new threat on the horizon so great that even the Immortals fear it, will the bickering lovers get it together in time to save the world?

Having overcome the androids of Dr. Tinker and converted them into an army under their nanite control, David and Kelly (combined into a perfect body based on David’s) set off into the city, finding the citizens excited to see them all. When they begin using their powers to heal the sick and wounded, they are suddenly inundated with cries for help. Kelly is devastated to find that their powers aren’t up to curing cancer, though, and before they can explain that they’re going to do more in the coming days, they are attacked. Doctor Tinker has allied himself with immortal beings calling themselves The Immutables, and their goal is to shove the titular duo through a portal into a prison dimension where they store immortals who don’t play by the rules. Before they can do so, Tinker turns on the Immutables, trying to force them ALL through the portal at once, but only succeeds in freeing the army of Immutables trapped on the other side.

BUT WHAT IS HELP, ANYWAY?

There is something very unnerving about the facial expressions Pham draws throughout this issue, with elongated, almost ovine heads, that makes it hard for me to appreciate the issue. It’s not an issue with our main character (whom I keep thinking of as Xombi, even though he/they aren’t the Xombi of old), who always looks carved from marble, but especially The Immutables suffer from various body horrors. Having re-read the first four issues after reading this one, there’s also an accessibility issue with the story, as I still have no idea how there have been this many immortal characters to play off. The action is exciting, though, and the betrayal by Tinker (which not unexpected) comes at exactly the right point to change up the metaphorical playing field again.

BOTTOM LINE: NOT YOUR FATHER’S XOMBI

In short, Duo #5 is a comic where the puzzling decisions don’t completely torpedo the story, nor do the problematic parts of the art destroy everything accomplished by the positive elements, balancing out to a slightly better than average 3 out of 5 stars overall. Once the next issue’s resolution is in hand, I want to reassess how it all reads as one complete story, but right now, each issue has been an interesting, if inconsistent beast unto itself.

Pham's art is stylized, bordering on bizarre, while the introduction of multiple world-changing plot point makes for an odd, unfocused reading experience.