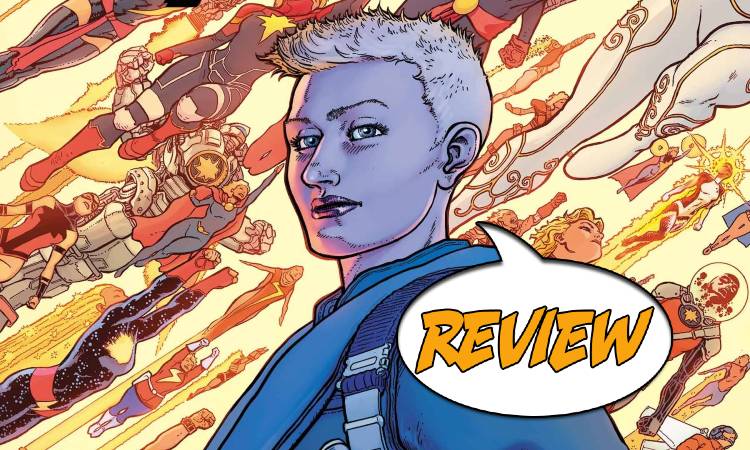 Captain America has been found. Thor has been recruited. But who is the third pillar? Your Major Spoilers review of Avengers Forever #9 from Marvel Comics awaits!

Previously in Avengers Forever: Earths lay in ruin all across the Multiverse. Avengers are assembling from every corner of creation as never before, knowing that the war of all wars is looming. And when there’s war, you know it’s time to call in the Corps, the most hard-hitting special ops squadron of elite high fliers and photon-armed commandos ever called to service: The Carol Corps!

TO FLY IS TO FALL

On an unnamed Earth, a woman named Carol Danvers dreams of flying. When she sleeps, her mind is filled with images of herself in the air, sometimes in a plane, sometimes on a pterosaur, sometimes under her own power, but always flying. During the day, however, she lives under the yoke of the Hellfire Club, in a world ruled by a horrific Dark Phoenix. All flying creatures are hunted by Hellfire’s mutants, while Carol tries to break the bonds of gravity and raise herself out of the mud. When she finds a hidden creche of nestlings, Carol sneaks them back to her home, trying to protect the birds until they can fly, only to find the sights of Hellfire guns aimed at her feathered friends. While trying to protect them, though, a stray bullet breaks her own shackles, allowing Carol to fly… but not fly away. Instead, she rains vengeance from the skies on the hunters, then bumps into the most unexpected helicarrier ever launched.

BUT IT’S ALL ABOUT HOW YOU LAND

Turning the Carol Corps into an interdimensional army of Captains Marvel is another of the wild, risky ideas that have made Aaron’s work on this title such a ride, and it comes together quite nicely. Much like the Captains America two issues ago, using multiple versions of the character allows the creators to show how elastic the concept of Captain Marvel can be. The Multiversal Masters of Evil threat is still waiting in the wings, but once again the time spent with the character is worth the time, despite the fact that my loudest complaints about this title since issue #1 have been the unusual pacing of it all. The final page reveal once again reminds readers that Ghost Rider is traveling the dimensions seeking out Prime Avengers, which is nice, since that plot has been on the back-burner for the better part of the last four issues. Best of all, we end with a huge number of Aaron-Kuder-designed variant Danvers in play, including all manner of armored, barbarian, steampunk, and other Marvels.

All in all, the art of Aaron Kuder and the scripting of Jason Aaron make Avengers Forever #9 as good, as off-beat, and as arresting as last issue’s kung-fu Thor tale or the world of Tony “Invincible Ant-Man” Stark, but we’re clearly building towards something grand and explosive, earning 4 out of 4 stars overall. I can’t wait to see where this is all going.

This Carol Danvers' life is another example of the creative risks that Aaron and Kuder are willing to take on this book and the slow-burn is still working for me.