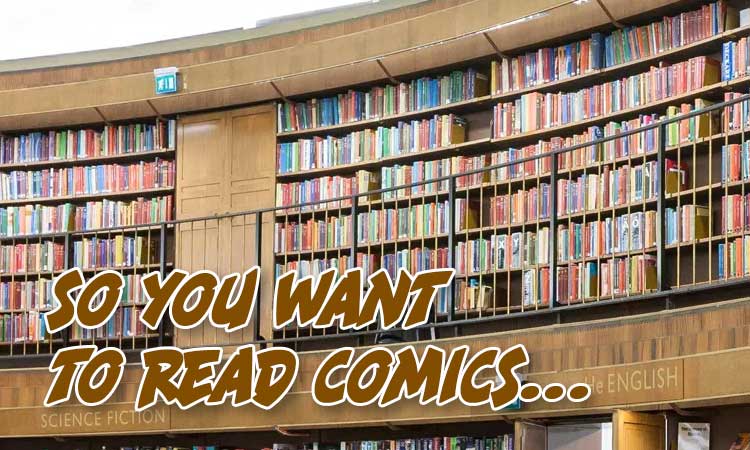 So You Want To Read Comics: Library Edition

We’re getting our library cards out with this week’s “So You Want To Read Comics”.  This is our weekly feature where we take a look at a single topic or genre, then give you two comic book recommendations, perfect for new readers, based on that topic or genre.  This week, we’re looking at libraries.

The first known libraries date back to beyond 2000 B.C. and were originally used more like archives.  They would store official documents, religious texts, deeds, and records.  While public libraries did exist in ancient Middle Eastern nations as well as Mediterranean nations, the type of library most of us will be familiar with wouldn’t come about until the 18th century.  Since then the services of a library have expanded from their primary focus of housing books for public use, to providing internet access, meeting spaces, and in some instances access to research databases and tax assistance, plus much more. The idea of a library is often romanticized in pop culture, with labyrinthian shelves holding countless books, grand stone architecture, and stern but helpful librarians just chock full of wisdom.  Movies like The Pagemaster, and even The Day After Tomorrow have utilized libraries as major settings, and books like The Name of The Rose have done the same.

Here are a couple of comic books that have joined in on the library love.

One Week In The Library

Imagine if there was a library out there that contained every single story ever conceived.  A library that has a life of its own, and must be maintained.  Now imagine if the stories inside started to grow restless.  That’s what you get in One Week In The Library.  This is a unique type of graphic novel because it isn’t strictly a graphic novel.  It uses multiple formats to help tell its tale.  Interwoven with the comic book sections are chapters written in traditional prose, as well as bits of poetry.  What’s nice is that it utilizes these different styles to help show that stories can take on many different forms and as a result the buildings that contain these stories are often much grander than their physical dimensions suggest.  Also, it’s very new reader friendly in that it’s a story that is told in just one volume.

We don’t often cover manga in these recommendations, but it’s pretty hard to pass this one up.  In this manga, the country is run by a tyrannical government that is hellbent on removing and destroying books it deemed undesirable from the public.  In response, to protect the books, libraries started their own paramilitary organization.  This sets the two sides at odds with each other.  While this series does take a real world problem, the banning and censoring of books, and tries to spice it up with military action and some romance, it never loses sight of that core issue. This manga is currently 15 volumes long and is actually based off of a series of novels, but is complete enough where reading those books aren’t necessary.

Have you checked out any of these titles?  Do you have some recommendations of your own?  Do you just like libraries?  Let us know in the comments section below.