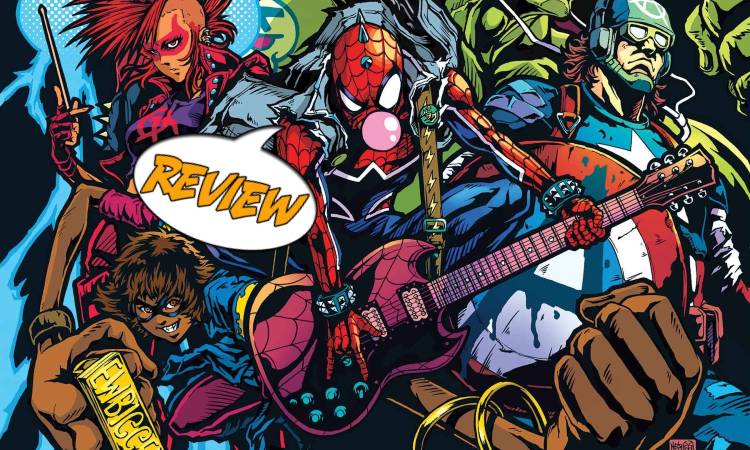 Y’gotta pick up the pieces, come on, sort your trash, but be real careful Spider-Punk, Osborn Venom’s on you… six. Your Major Spoilers review of Spider-Punk #5 from Marvel Comics awaits!

Previously in Spider-Punk: The stage is set, the instruments tuned, and everything is ready for the execution!

Wait… EXECUTION?! Spider-Punk and his band of misfits better survive in time for an encore!

THE SPIDER-BAND FACES THE FASCISTIC FOUR

Having made their way to Washington DC, Spider-Punk and his band have confronted POTUS Norman Osborn, but failed in their attempt to take him down. Now, the Venomized/Cyborgized madman is prepared to execute the entire Spider-Band on the National Mall. Captain Anarchy is first on the literal chopping block, but there’s something the Captain knows that Osborn doesn’t…  Spider-Punk has a big, green ace-in-the-hole in the form of The Hulk! The Green Goliath arrives to turn the tide, while Riri “Riotheart” Williams manages to commandeer War Sentry’s armor to upgrade her own. That leaves only Taskmaster and Flash Thompson to face the five members of the Band while Hobie faces Osborn, but what can he do without power to his amplifier?

Turns out, perhaps more than you think!

When I reviewed the first issue of Spider-Punk, I was impressed with the attitude and aesthetic that Ziglar and Mason were able to create, but wondered whether that energy could be sustained for five issues. This finale proves that it absolutely can, delivering an absolute “Hell, YEAH!” moment in Hulk’s arrival, even if it means that the Spider-Van is no more. The choice of characters isn’t accidental, with Flash, War Sentry, and Taskmaster representing military, police, and capitalistic forces, reminding us that the Spider-Band is fighting against more than street crime. Cap it off with a corrupt politician in Osborn and you’ve got both textual and metatextual drama on every page. The full-page image that ends the Spider-Punk/Osborn battle is almost worth the price of admission by itself.

BOTTOM LINE: I LIKE THIS MORE THAN I EXPECTED

The various denizens of Earth-138 are wild and creative, while the wrap-up of the overarching plot is satisfying and loud, meaning that Spider-Punk #5 brings the noise with strong art, satisfying closure to the ongoing story and punk spirit, earning 4 out of 5 stars overall. I also wouldn’t mind seeing a solo outing of the Daredevil Drummer from Philly.

The battle against a corrupt President is not only fun, but thematic to the whole punk aesthetic, and the ending makes me think I'd like more adventures on Earth-138.