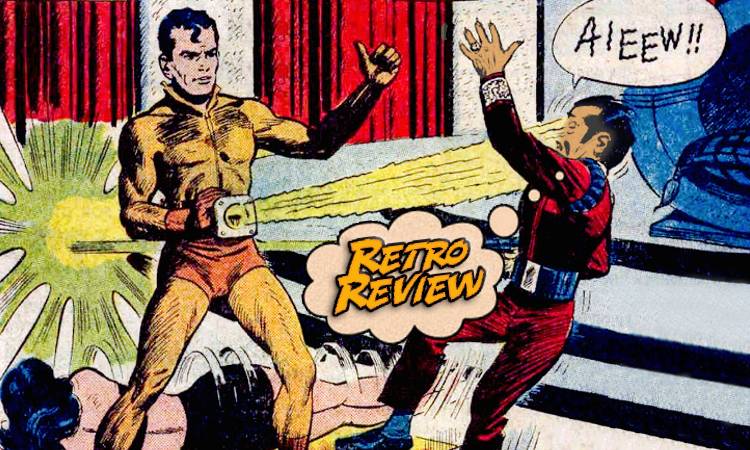 Super-spies were all the rage in the mid-sixties, comparable only to the furor about Batman on TV. But what happens when you put them together? Your Major Spoilers Retro Review of Undersea Agent #1 awaits! Previously in Undersea Agent: First, there was T.H.U.N.D.E.R.: The Higher United Nations Defense Enforcement Reserves. Thanks to special devices created by a U.N. scientist, each agent has superhuman powers, albeit with a price. The premier team of Tower Comics, the Agents had been at their evil-punching/espionage ways for a couple of months before this issue debuted.

We begin with Davey Jones, Navy SEAL, and ace fighter pilot, being given the baffling order to sink an American carrier. When he returns to base, he is told that the ship was abandoned with all hands lost… and it’s not the only one. Lieutenant Jones is sent to meet with U.N.D.E.R.S.E.A., (United Nations Department of Experiment and Research Systems Established at Atlantis) a sister agency to T.H.U.N.D.E.R. (which, I guess, officially makes him the U.N.D.E.R.S.E.A. Agent, but I just don’t have the time or the patience to type that over and over). Arriving at the secret base, located at the bottom of the ocean, the future Undersea Agent meets the agency’s eccentric leader, Professor Weston. The first thing that I noticed about this comic, as with most Tower publications, was the art. Ray Bailey’s work is clean and sharp, like that of fellow Tower stablemate Wally Wood, with a whimsical bent that reminds me of Will Eisner. Those two names make for some pretty heady company for this issue’s visuals, but Bailey proves himself up to the task multiple times. Of course, the same can’t be said for the scripting. The issue spends nearly four pages introducing Undersea Agent’s special diving suit and gear (including the bubble helmet that makes him stand out), with Professor Weston taking plenty of time to berate and demean his assistant Skooby Doolittle. The pacing in this issue feels remarkably like a daily newspaper strip, and it shares many of the same weaknesses, repeating information we just heard, drawing out interactions that aren’t particularly important, and somehow skimping on those that are. Professor Weston also introduces the big bad of Undersea Agent’s subaquatic world, one Doctor Fang. As the name might imply, he’s a very dated Yellow Peril archetype, even for 1966, Normally, I’d be bothered about how to showcase the comic while minimizing the presence of such a racist stereotype, but fortunately, Dr. Fang is pretty much a non-entity in this issue. This page suddenly jogged my memory, giving me the sudden realization of why Bailey’s art feels so familiar: He’s riffing on Milt Caniff, creator of Steve Canyon and Terry and the Pirates! Once you see it, the odd comic strip pacing suddenly clicks and the whole aesthetic takes on a whole different tone. Steve.. Err, Davey encounters the beautiful Renata del Mar, the daughter of a scientist captured by Dr. Fang to infiltrate the villain’s lair, escaping only by his wits and his gadgets (with a little help from Renata and comic-relief sidekick Skooby). There’s super-science, skin of the teeth escapes, and an army of man-eating sharks, but one attribute that this book lacks? Any real sort of tension.

We do, however, get a backup feature for Skooby, highlighting his desire to become a full-fledged agent of U.N.D.E.R.S.E.A.! At sixty-eight pages, this issue is a perfect example of Tower Comics’ ethos: A big package of fine-looking comic action that justifies the high price tag. (At 25 cents, a Tower book was more than double the price of the ten-cent regular comics of 1966, which seems to have hurt their sales, even with the nearly double-sized page count.) Undersea Agent #1 hits that nail right on the head, but with a meandering plot that ends up going nowhere, ranking 3.5 out of 5 stars overall. At least

A really pretty book that, sadly, plods along through a lot of familiar adventure-strip tropes, featuring a wildly awful retrograde racist villain and a main character who is little more than a cipher. But, boy does it look great!