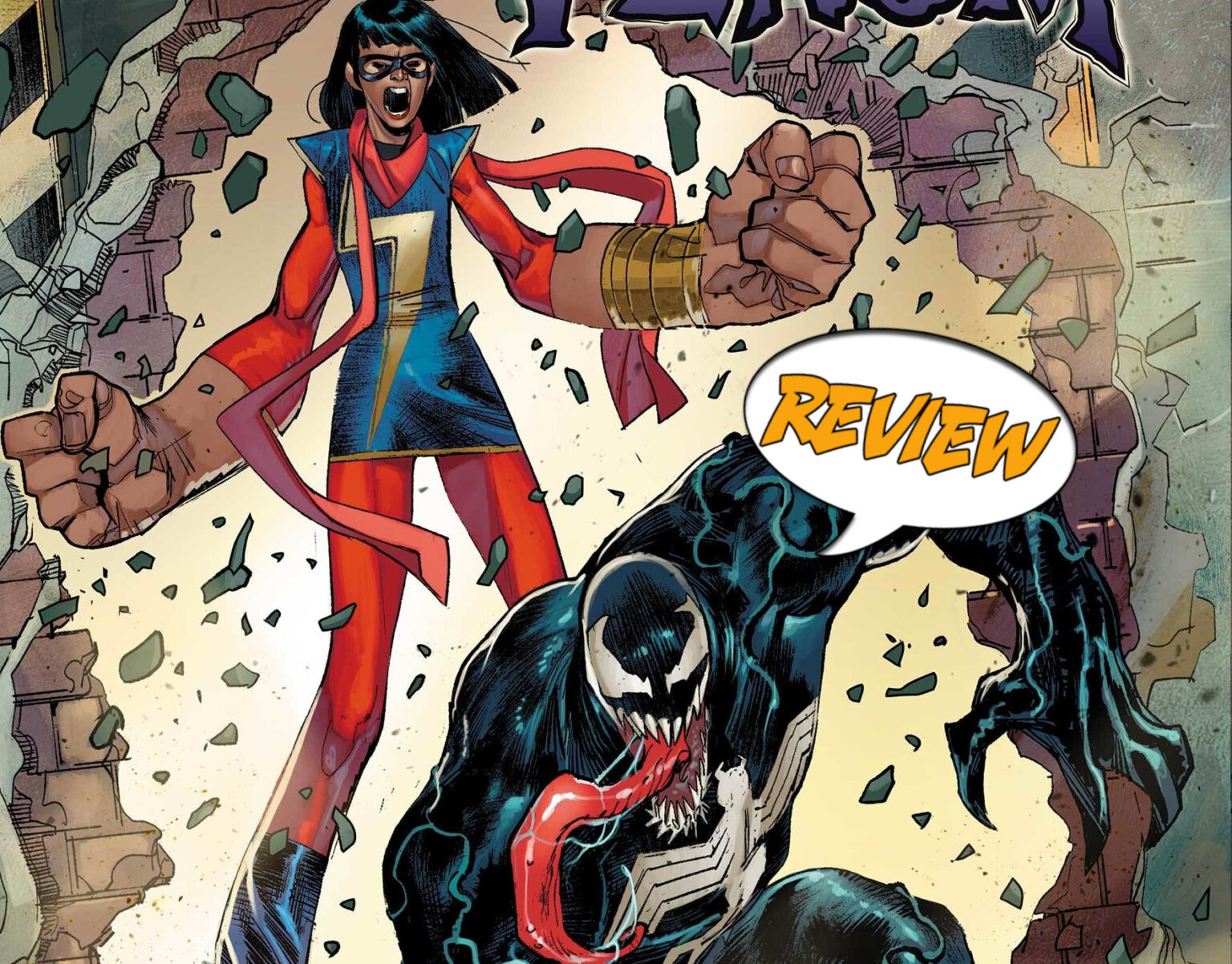 Ms. Marvel is on the trail of mechanic robots attacking well-known superheroes. The robot’s next target? Venom! Check it out in Ms. Marvel and Venom #1 by Marvel Comics!

Previously in Ms. Marvel: Kamala Khan gained her powers when her latent inhuman genes activated. Now she is the hero known as Ms. Marvel! Ms. Marvel visited the X-Men treehouse when a swarm of robots attacked the treehouse. After helping save the X-Men, Ms. Marvel followed the trail, helped Moon Knight, and found a way to track these mechanical creatures.

Ms. Marvel and Venom #1 starts with Venom fighting off a swarm of robots and Ms. Marvel saving him. As the second wave shows up, Ms. Marvel and Venom decide to protect civilians rather than worry about the hive. The robots take part of Venom’s symbiote, and Venom can track it down to an apartment building holding a secret lab. They encounter a man using drones to get DNA samples from various people. In return, he was given an immortality serum. He is chronically ill and uses the serum to cure himself. However, he turns into a giant monster and explodes.

Venom tracks more of his symbiote beneath the building. Ms. Marvel calls in Wolverine and Moon Knight as back up, and they attack the lab. They find a scientist using DNA to mimic mutant immortality. They then inject a bunch of people with the unfinished immortality serum, turning them into monsters. Ms. Marvel convinces the scientist to give her the antidote, and the heroes save the people before they explode. They then destroy the samples and save the day.

The best part of Ms. Marvel and Venom #1 is Kamala Khan’s inner monologue. She talks about her perception of Venom as a villain turned hero. I was touched when Venom and Ms. Marvel risked their lives to save civilians. This was impactful because of Ms. Marvel’s youth and watching everything from her perspective. People who know me know that I enjoy a coming-of-age story. While this character has already developed her heroic identity, a youthful examination of the characters provides a new perspective on these characters. And seeing that Wolverine, Moon Knight, and Venom makes this series worth reading.

I haven’t read much of Venom lately. When I see him on the page, I expect him to be a larger-than-life character. Something akin to how much space Hulk takes. Venom here seems relatively tame, and I wonder if he is drawn as less monstrous to represent his moral change. But I admit I was disappointed that we didn’t get to see scary Venom in this episode. In fact, all the art seemed on the safe side in this comic.

I loved the storyline in this issue and how it ties into the immortality question in the current X-Men titles. Ms. Marvel and Venom #1 is an unlikely pairing that worked in a one-shot. I appreciate Ms. Marvel’s youthful perspective as she deals with these unlikely team-ups. With that in mind, this comic is 4 out of 5 stars.

Ms. Marvel and Venom #1 has a youthful personality as Ms. Marvel teams up with the scariest Marvel hero!