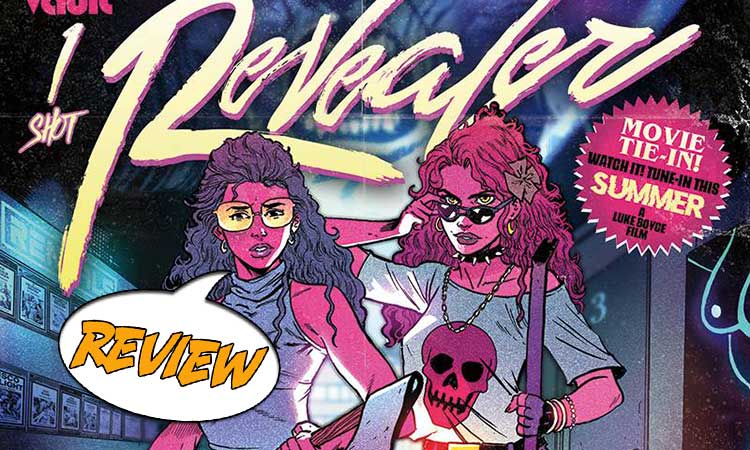 The lives and sins of a collection of people come under the judging eyes of hell. Your Major Spoilers review of Revealer #1 from Vault Comics, awaits!

Previously in Revealer: Spinning out of the horror film Revealer, these four stories tie directly into the movie. Learn more about the characters, the lore, the Revealers adult bookstore, and what awaits on the other side of the biblical apocalypse.

NO ONE’S HAVING A GOOD DAY

Revealer #1 is a collection of short vignettes featuring characters from the movie Revealer. In the first one, the story of Asmodeus is shown and how he waged war, lost, then became Lucifer’s issuer of judgment on Earth. In the next story Angie and Sally face off against Asmodeus, but all the while Sally keeps slipping into another realm where her faith is challenged by a series of horrific visions. In the third chapter, a dancer is practicing her moves, when the child she’s watching overcomes in and begins to ask her very pointed questions. A sudden transformation in the child along with some plumbing issues only adds to the trouble. Finally, in the last story, Raymond goes about his day before his shift starts at Revealer. Along the way he is accosted by a man who warns him of very dark times coming.

With Revealer #1 being a movie tie-in, it should come as no surprise that this issue works best in conjunction with the film. But, that being said, it actually works fairly well on its own. There are a few details missing here and there, but for the most part, each story is complete and manages to tell a different sort of tale. While none of the stories are really bad, the second one is the weakest of the bunch and that is due to it being the most disjointed. While the rest of the stories provide all the info a reader needs to understand the story, the second one feels more like something pulled out of something bigger so it’s missing that completeness. What really manages to bring this all together is the consistent tone throughout, which is not the overdone or forced influence of 70s b-movie pastiche. Some of the dialogue is a little cheesy, and there’s some gratuitous nudity, and a nice amount of blood and disturbing imagery, but it’s all done with a lack of self-seriousness that makes it a fun read.

The art in Revealer #1 manages to do something that a lot of anthology books don’t and that is to have good art throughout. Once again, this comes down to it being consistent with the 70s-inspired tone of the book. The book appears to be hand colored, and there’s a lack of crispness to the lines that feed into the overall look of the book. While there are some obvious differences as new artists take over from story to story, none of them feel out of place.

While Revealer #1 does have its ups and downs, none of its stories ever dip into being bad. What’s even more surprising is that for a movie tie-in, this comic manages to be enjoyable without having seen the source material. For anyone looking for some campy, religious horror, this is a fine pick up. 4 out of 5 stars.

Revealer #1 is a solid collection of stories that doesn’t rely too heavily on its source material and its b-movie tone and Silver Age inspired art adds to its appeal.