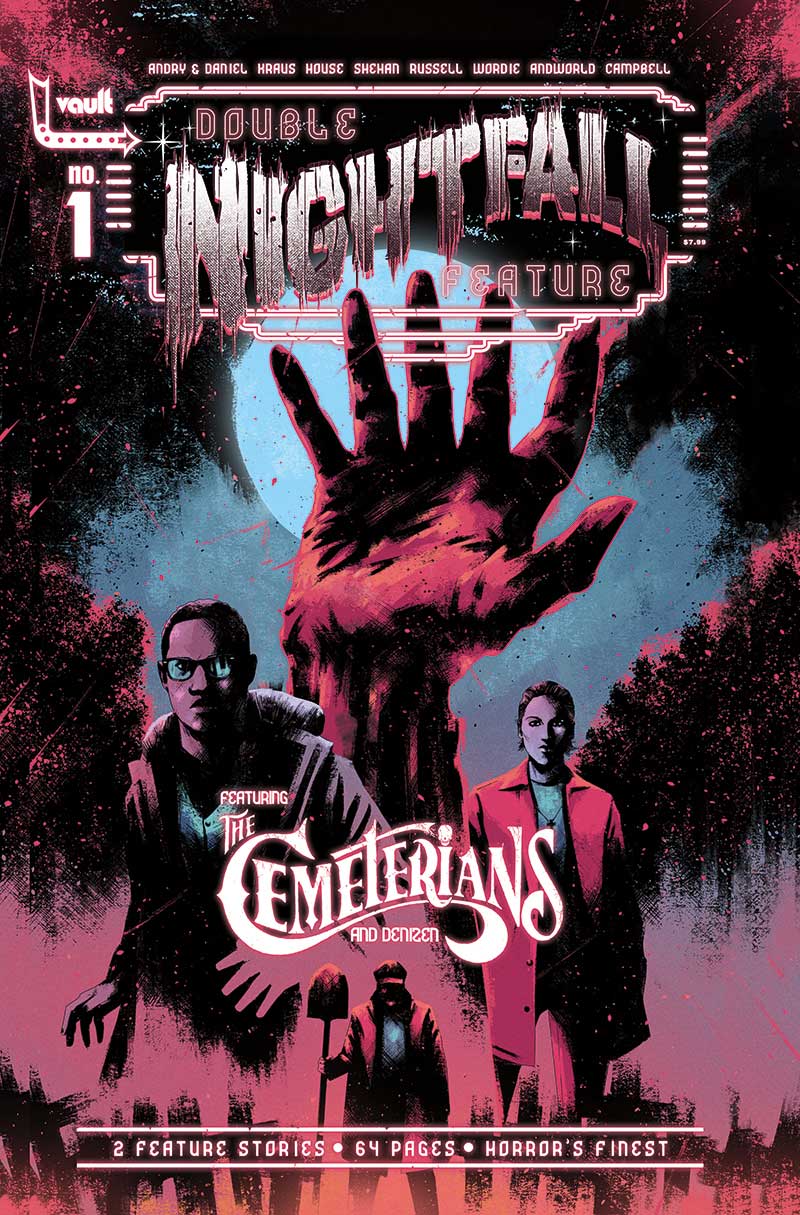 When Nightfall: Double Feature lands in stores in October, it will feature a number of variant covers from some fantastic artists.

NIGHTFALL: DOUBLE FEATURE is brand new series of double-sized comics that contain two separate ongoing horror stories from the creators behind House of Slaughter, The Autumnal, The Plot, and Resonant. Grab your popcorn and clamber into your sleeping bag for two tales of terror just like a classic drive-in movie experience.

Feature one is THE CEMETERIANS, written by New York Times Best-Selling author Daniel Kraus (The Autumnal, The Shape of Water), drawn by Ringo Award nominee Maan House, colored by Kurt Michael Russell (The Plot, The Blue Flame), and lettered by Andworld Design. After human bones begin growing inside inanimate objects all across the globe, a renegade scientist and brilliant theologian delve into the cemeteries where the bones originated, discovering an otherworldly force tired of being buried in darkness.

Feature two is DENIZEN, written by Tim Daniel (The Plot, End After End) and David Andry (Resonant, End After End), drawn by Chris Shehan (House of Slaughter, The Autumnal), colored by Jason Wordie, and lettered by Jim Campbell. A family’s cross country road trip goes off the map and into the unforgiving wilds of Joshua Tree National Park, when mom and wife-to-be Helene succumbs to a malevolent force tucked inside an abandoned camping trailer.

“For nearly three years now, Vault has been publishing astonishingly high-quality horror tales through our Nightfall imprint,” said Nightfall mastermind, Tim Daniel in a press release from Vault Comics. “Starting in October 2019, we chose Nightfall as the vehicle through which we could introduce horror into our catalog, aligning it carefully with our existing twin pillars of science fiction and fantasy. Series as diverse in voice and presentation such as The Autumnal, Black Stars Above, Human Remains, Hollow Heart, I Walk With Monsters, and The Plot resonated powerfully with our readers and demonstrated the startling width and breath of the genre. A discerning editorial eye also ensured that we could offer readers the same incredibly high level of quality they’d come to historically expect of the core Vault titles.

“As our company celebrates five years of publishing excellence, this October felt like the natural time to remind everyone that Vault horror is not only here to stay, but yet again it will expand the boundaries of our line by introducing a uniquely rewarding new format for our readers.

“And we assure you, Nightfall: Double Feature is more than just a reminder or celebration of bygone success, it is an ambitious nod towards the many more extraordinary things we’ve planned yet to come.”

Here are the artists and the covers for Nightfall: Double Feature: