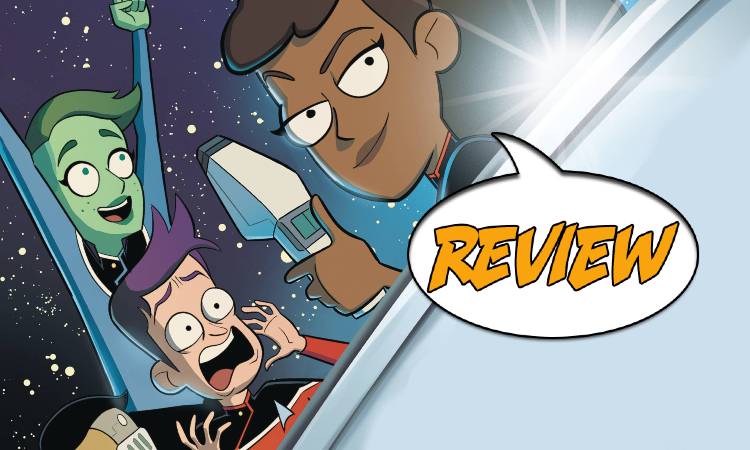 In space, no one can tell that you’re freaking out about the latest disaster on board the ship. Your Major Spoilers review of Star Trek: Lower Decks #1 from IDW Publishing awaits!

Previously in Star Trek: Lower Decks: Soon after leading her crew on a planetary expedition aimed at building bridges and advancing Federation technology, Captain Freeman begins to suspect that the planet and its people are not all what they seem… Meanwhile, the crew in the lower decks take to the holodeck, enjoying some much-needed recreational time until a bloodthirsty visitor decides to join in on their games!

We open in space, with a ship on the run and another firing wildly as it flees. It’s a recipe for disaster, but the USS Cerritos is on the scene! Moreover, in a complete reversion of Trek standards, the attacking ships can’t even scratch the shields, allowing Captain Freeman to easily handle and threat and defuse the situation. Of course, that doesn’t stop Ensigns Boimler, Mariner, and Tendi from taking time out to play on the holodeck. After Boimler’s nerdy Dixon Hill novel gets rejected, they start running through more and more stories, until Mariner decides to start up the Sherlock Holmes simulation. Much panicking ensues, as the story of Professor Moriarty battling Data is recounted, while Mariner repeatedly demonstrates that the holodecks simply won’t create sentient entities anymore, creating an image of Dracula and ordering the computer to make it fully cognizant. Boimler squeals in terror that she has to stop, because a massive, random energy surge is what caused the Enterprise to accidentally give Moriarty life…

YOU HAD ME AT “EXPLODING CONSOLES”

Okay, the very first page of this issue featured a semi-deep cut from TOS episode, The Way To Eden, and at that point, I was quite sure this book was for me. As the story continued, I once again found North’s asides (found in the page margins, much like his time on Squirrel Girl) to be as entertaining as the narrative, but rather than detracting from the story being told, they add another level of fun to the proceedings. It’s hard to judge the art style of Fenoglio from these pages, but it’s remarkable how accurately the characters and settings from the Lower Decks cartoon are reproduced here, and the characters retain their own personalities and expressions throughout. The story is full of Star Trek lore, including some deep cuts that I can’t be certain would be caught by every reader, but as deep as those bits of schtick got, they never overwhelmed the A and B plots.

BOTTOM LINE: COMEDY IS HARD, BUT THEY NAIL IT

As someone who had never seen an episode of Lower Decks before reading Star Trek: Lower Decks #1, perhaps the highest praise I can give is that as soon as I finished it, I went to check out the first two episodes of the show based on this issue’s strong, consistent art and clever story, which combine for 4.5 out of 5 stars overall. Maybe I’m a sucker for Space Hippies (“or, as we call them here in space, Regular Hippies”), but this is a good comic book that served as my gateway to the show it’s adapting.

The art is remarkably on-model, the story is fun and the asides are laugh-out-loud funny. Add in a killer cliffhanger and you've got yourself an entertaining comic book.