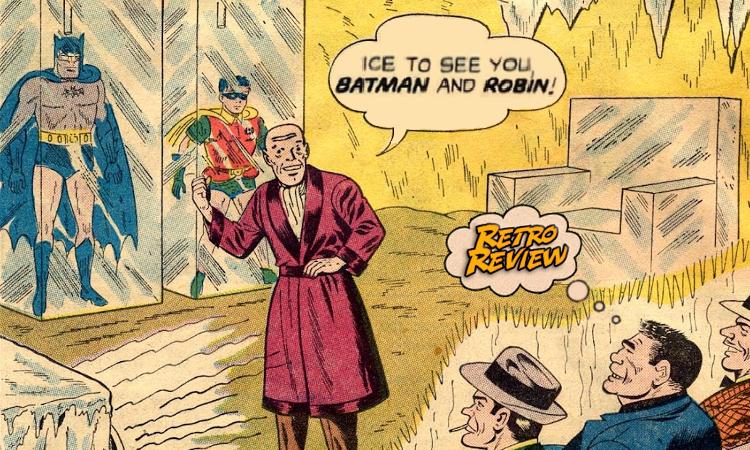 He knoh-ooohs wat keeled thay die-no-sowaahs, but once upon a time, he was merely Mister Zero. Your way-cool Major Spoilers Retro Review of Batman #121 awaits! Previously in Batman: It’s a tragic and tender story. Seeking a cure for his beloved wife, Nora, Victor Fries used his expertise in cryogenics to preserve her in stasis when a terminal disease threatened her life. His corrupt boss got involved, causing an explosion that left Victor unable to survive at temperatures above zero degrees. Fortunately, his scientific skills were such that he could create an armored refrigeration suit and freeze-rays, turning him into the villain called Mister Freeze.

But that, dear friends, isn’t how it all began. The first two stories in Batman #121 examine a murder in The Batcave (this time, the butler DIDN’T do it) and a cute story extolling the virtues of the railroad police, but the one that makes this issue more valuable than those around it takes the third position, which in this era meant that it was considered a sort of main event. As you have seen, we meet a strange gang of criminals targeting the Gotham Jewelry Exchange in search of diamonds and jewels, no surprise in a comic from the fifties.

But do you know what IS surprising? The fact that the notorious ice-skating sequence from 1997’s Batman and Robin isn’t the non-sequitur that it seemed to be, but is in fact a reference to this first appearance! The Dynamic Duo loses their quarry, but is successful in catching one of the gang members and throwing him in “the cooler.” (Apparently, the terrible puns were also canonical. Who knew?) This leads to a clever moment where a new thug is brought in to hench, leading Mister Zero to explain to the new guy who he is and how he came to be. As exposition goes, it’s a clever setup, and the wonderfully vibrant art of Shelly Moldoff brings the sequence to vivid life. It’s actually Moldoff’s work that I think of when I think of classic Batman, mostly due to the opening sequence of the 1966 Batman show and this issue doesn’t disappoint. The 1959 timeframe of this issue puts it, in the strictest sense, in Earth-2 continuity (the issue features a full-page house ad for a bold new character called The Flash) but Mister Zero carries over to the Earth-1 version of Batman as well. That’ll be important down the line.

Continuing to focus on collecting “ice” to fund his criminal empire, Zero targets a visiting princess, which once again draws out Batman and Robin. Their clash allows the frozen foe to lead them into a trap, flying their Whirly-bats into his freeze ray and an icy fate. A clever Batman engineers an exit from their imprisonment (which, once again, is a moment referenced in Batman and Robin, with no explanation of how the frozen heroes breathe in either case), and causing a steam pipe to burst and flood the refrigerated crime lair with boiled vapors. The heroes and the Zeroes are enveloped in steam, which gives the not-quite-so-Dark Knight another mark in his impressive Win Column. Not only does he shut down Mister Zero’s gang and recover the stolen “ice” but Batman cures the villain of his cryonic sickness entirely by accident. The villain gets sent up the river at the end of this story, disappearing from Bat-adventures for the better part of a decade. His return in a 1968 issue of Detective Comics actually comes AFTER multiple appearances battling Adam West on TV, where the character was played by multiple actors, including Eli Wallach (an EGOT-winning actor whom I remember for The Magnificent Seven and The Good, The Bad and The Ugly) and legendary director Otto Preminger. In those stories, Freeze is referred to as Dr. Otto Shivel, and his profile in the DC Universe was very low throughout the remainder of the Bronze Age.

The sad truth of Mister Freeze, nee Mister Zero, is that it took until 1997 for him to find his niche, thanks to Bruce Timm and Paul Dini and Batman: The Animated Series. Thus, Batman #121 isn’t really the first appearance of any more than the concept of “scientist who lives in a freezer,” with the Mister Freeze nom de guerre appearing a decade later, the helmet and goggles originating in live-action, and the bulk of what makes Victor Fries interesting tacking another thirty years to arrive, leaving us with 3.5 out of 5 stars overall. It’s a common comic book tale, where the later stories create a beloved character using nearly nothing from the source material. Ask me about the history of Venom sometime.

This story doesn't give us much more than the gimmick, but it's remarkable how much makes it into the 1997 film appearance of the character, including his velvet ascot and dressing gown.