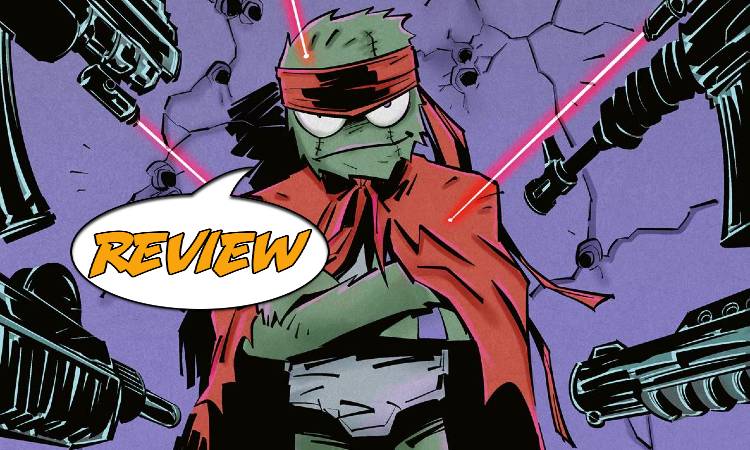 There’s a fight brewing, on Salutation Street, but only one faction is filled with poly-cotton stuffing. Your Major Spoilers review of Survival Street #2 from Dark Horse Comics awaits!

Previously in Survival Street: When the Weapons Retailers of America (WRA) declare “THE RIGHT TO GUN OWNERSHIP BEGINS AT CONCEPTION” and take aim at arming babies, the A-B-C-team is drawn deep in the heart of Texas! Hey, kids-can you say “OUTNUMBERED?” Plus: the tragedy of Herbert, a.k.a. Corporal Punishment.

After last month’s introduction of a world where living puppets and humans coexist, we open this issue with a firefight. Birdie, Hippy, and friends have found themselves in Texas, where no one is safe from gunfire, thanks to the work of the WRA. Worse still, they’re in the town of Hollow Point, where the law states that any conflict can be resolved with a gunfight. Our heroes take refuge in a church, where we find out the origins of the felt people and how they came to the US in the first place, as well as specifics on Herbert, known on television as Corporal Fairness. As our heroes come under fire by over-the-hill action star Cain Westwood, the former Corporal Fairness reveals his new face… Corporal Punishment! WRA President John DuParis flees the puppet avenger, only to have Herbert follow him to his office and, ON NATIONAL TELEVISION, execute him in cold blood.

That message (“Play fair or I’LL be there”) being delivered with a bullet is exemplary of Survival Street’s brand of satire. The just-a-turn-to-the-left fake names (DuParis isn’t far from LaPierre, after all, though the late Charlton Heston is called out without alias), the not-quite-ridiculous violence, even the use of Christian iconography are bludgeons to call out the silliness of modern socio-politics. That’s not always a bad thing, but here it feels like the same point being repeatedly hammered home over and over. The art is somewhat more circumspect, but we still get Hippy the Hippo taking a high-caliber round to the knee, with stuffing flying everywhere. I honestly like the design work a lot, and some of the various Texas assailants are too detailed NOT to be based on real people, but the piece de resistance of this issue is undoubtedly Clint… errr, Cain pulling out a pair of solid gold sub-machine guns and declaring that the puppets brought hugs to a gun fight.

BOTTOM LINE: NOT REALLY MY BAG

Survival Street #2 is a comic that I appreciate on many levels, with some nicely done art and a story that wants to call out hypocrisy and entitlement, but it ends up doing so in a way that feels strident and a little one-note, earning a straight-down-the-middle 2.5 out of 5 stars overall. There’s a lot to like about this comic and its world, but I would have appreciated more subtlety.

While the examination of Herbert's life and the explanation of the "puppets" origins is interesting, the satire is unfocused and just too broad to be incisive.