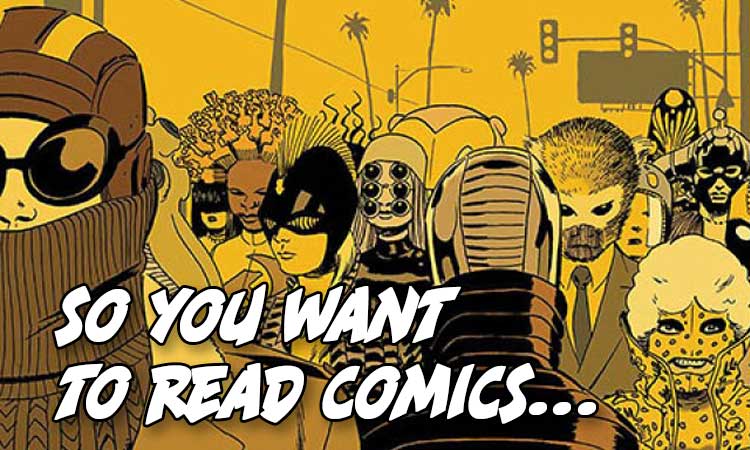 So You Want To Read Comics: Cyberpunk Edition

Our decks are ready with this week’s “So You Want To Read Comics”.  This is our weekly feature where we take a look at a single topic or genre, then give you two comic book recommendations, perfect for new readers, based on that topic or genre.  This week we’re diving into the world of cyberpunk.

Cyberpunk has roots that go back to a wave of science fiction that emerged in the late 60s and early 70s that specifically dealt with the effects of technology on societal collapse.  In particular how advances of technology in conjunction with or symbolic of drug use, has disproportionate impacts on the “lower” echelons of a society as opposed to those who hold onto power.  The term became solidified in the 80s as science fiction began to incorporate elements of hacker culture and rampant consumerism into their tales.  Today, the sub-genre of cyberpunk is often utilized as cautionary and dystopic tales of unchecked capitalism and the counter-cultures that rise up in opposition.  The trappings of this genre has appeared in every entertainment medium including books like Altered Carbon, and it’s subsequent TV adaptation, movies like The Matrix, it’s deeply ingrained in many animes and mangas, and of course, comics.

Here are a couple graphic novels that exemplify the trappings of cyberpunk that are easily accessible for new readers.

While most cyberpunk stories involve the consumption and reliance of technology, The Private Eye shows the inverse of this via a classic style detective story.  In a world where the internet has effectively collapsed and in its wake releases everyone’s data to everyone, people turn to literal masks and pseudonyms to cling to any bit of privacy that remains.  This graphic novel focuses a lot on the give and take that people face when it comes to isolating themselves and making real connections with others when it’s so difficult to see someone’s genuine self.  There’s also some portions that deal with the way that people treat each other when their actions can’t be tied to their identity.  The digital versions of this series are available digitally through The Panel Syndicate which allows you to name your own price.  It is also available in physical copies.

One of the most appealing aspects of consuming a cyberpunk story in comic book format is being able to see a fully realized world that can shake free from physical restraints that movies have. Spaceman is a somewhat abstract story about a genetically altered man who was designed to survive Mars, who is grounded on Earth.  This scenario opens up many avenues to explore themes like loneliness, drug use, the disposable way people view technology these days, and the integration of internet sensibilities and lingo into day to day life. It even touches on how important the human form is to humanity and whether that is the right way to see things or not. Being just one complete volume, this graphic novel is a fully realized story that explores its themes thoroughly and can be read in one or two sittings

*Writer’s Note* I wanted to recommend The Long Tomorrow by Moebius and Dan O’Bannon, which is an influential entry into the world of cyberpunk comics, but an English version isn’t easy to come by, but if you can find a copy, check that out as well.

What are your favorite cyberpunk comics?  What did you think of these recommendations?  Let us know in the comments section below.