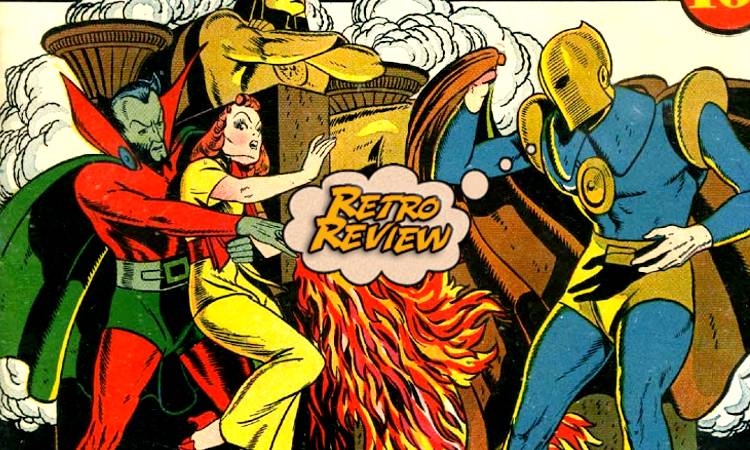 By next month, he’ll be featured in a major motion picture, but what’s the real story behind Doctor Fate? Your Major Spoilers Retro Review of More Fun Comics #55 awaits! Previously in More Fun Comics: Predating the superhero craze, More Fun Comics AKA New Fun Comics AKA New Fun was the first comic book to be all-new material rather than reprinted. By 1940, though, the shadow of Superman was already long. The Man of Steel’s creator had teamed with artist Bernard Baily to debut The Spectre in issue #52, taking over the covers of More Fun with his ghostly antics. The second magical force in the Justice Society arrived in a somewhat less dramatic fashion. It all begins with a kidnapping on the streets of an unnamed city. Though worth quite a bit in the back issue market, this issue hasn’t often been reprinted, which is my roundabout way of apologizing for the grainy microfiche images. The would-be killer was compelled by the mysterious Wotan, the green-skinned fellow in the last two panels there, but even with his strange powers, he fears Doctor Fate. The pointed-headed sorcerer (whose helmet design varies wildly throughout these early issues, only settling down after he joins the Justice Society and changes to a half-face version) is billed as having learned the secrets of the universe! The most amazing thing he does in this short first appearance, though, is to make his cape appear and disappear between panels. Artist Howard Sherman is one of the people who ghosted art for Bob Kane, but is best known as the co-creator of Doctor Fate. (He later helped to come up with Space Cabbie, but that’s a deep cut even by my standards.) This issue’s art isn’t as graphic as an Alex Toth or a Joe Kubert, nor as dynamic as Joe Shuster’s, but it’s very attractive stuff by Golden Age standards. Having failed to kill Inza by proxy, Wotan takes matters into his own hands, coming face-to-face with Doctor Fate. There’s no real explanation of Fate’s origins or previous adventures here, but I find it interesting that Wotan’s powers are explicitly black magic, but Fate’s are described as the transfer of matter into energy, with no mention of magic and little in the way of references to the Egyptian trappings that would come to define him. The helmet makes for a very striking look for the character, but it’s fun to see it taking seven different shapes in seven different panels, reminding readers that the Golden Age was about hitting your deadlines and getting the books out the door. The way this debut story ends should also serve as that kind of reminder… …as the hero punches Wotan out and hucks him out a window to his doom! There’s a pulp influence in that ending, for certain. In the pages of More Fun Comics #55, Doctor Fate casts no spells, apparently cannot yet fly, and casually murders to save his lady love, with no hint of the how and the why of it all, with inconsistent art that equals out to a middle-of-the-road 2.5 out of 5 stars overall. It’s easy to see why Doctor Fate’s maiden voyage is so hard to come by (the only place I could find it reprinted was in a DC archive volume that is out of print and impossible to find), but it’s interesting to see the character in this early stage. Grant Morrison’s Multiversity issue, The Society of Superheroes, features a Fate who resembles this take, which only makes sense in hindsight after perusing this story.

Doctor Fate's first appearance is neither origin nor much of a story at all, but it's really fun to see the character design evolving from panel to panel throughout the tale.