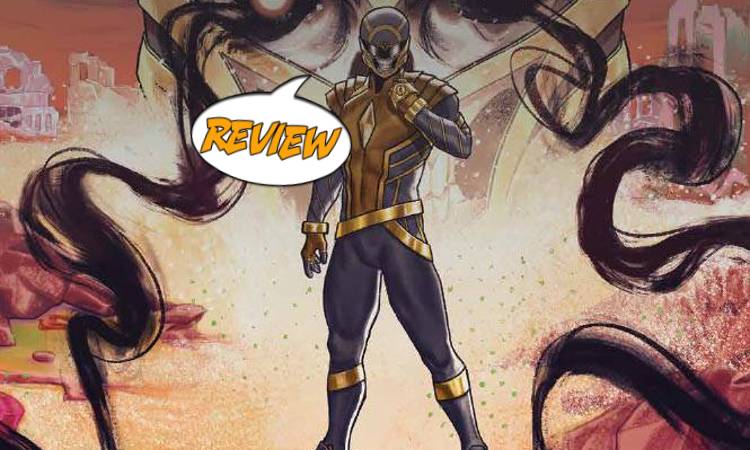 They were once the Gold Omega Ranger. But what horror could have turned Spa’ark into a Death Ranger? Your Major Spoilers review of Power Rangers Unlimited: The Death Ranger #1 from BOOM! Studios awaits!

Previously in Power Rangers Unlimited: The legendary Omega Rangers defended the universe from evil thousands of years ago, the six of them using their elemental powers to protect others from sinister forces. That all changed when one key member turned on the others, seduced by the death-defying powers of the Rangers’ greatest foe.

How does this Ranger connect to what’s locked in the mysterious Omega Vault in Safehaven?

Regular readers of Power Rangers may recall that Andros, the Red Space Ranger, somehow knew about the Gold Omega Morpher and the creature within it, using it to reanimate his mostly-dead partner, Zhane, the Silver Space Ranger. But how did he ever know about it in the first place? Years ago, on their home world, young Zhane and Andros are getting ready for bed, right after a story from their caretaker, Ma’avi. She relates the story of the ancient Omega Rangers’ battle with Sister Supernova, a giant monster from beyond space. They successfully rout the creature but, due to a translation error, don’t realize that it’s not Sister Supernova, but a Supernova Sister… and there’s another one on the way! This battle doesn’t go so well, leaving Haza, the Blue Omega Ranger, dead and Gold Ranger Spa’ark traumatized by their first interaction with death. Days pass, and their mental state continues to deteriorate until a creature called the Galactic Maw offers him a deal that Spa’ark finds hard to refuse.

A TALE OF TRAGEDY AND HORROR

This is a familiar moment for the BOOM! Power Rangers franchise, showing us the hidden story of a previous team, as we did with the 1969 Power Rangers team, as well as the Supersonic Rangers’ tragic history, but it’s a pretty successful one nonetheless. These Rangers may not be well-rounded, but the thumbnail sketches of their personalities work well enough to make Omega Gold’s dilemma resonate with readers. The resolution comes a little bit fast, and if you wonder about how Andros’ nanny discovered the legends of a lost Ranger sect too hard, things might get sketchy. The art is quite good (especially the design of the Supernova Sisters, who resemble Zoltar from Battle of the Planets) but the decision to give Spa’ark a face with no nose and odd eye placement is less successful. There are also several points in the story where the broad strokes are present, but the details are lacking, such as when Spa’ark mind-controls a pseudo-zombie Haza to attack her comrades. I had to parse the page several times to fully get what was happening, which affected my enjoyment of the issue.

BOTTOM LINE: SHOULD HAVE BEEN IN THE PAGES OF POWER RANGERS

All told, my biggest complaint about Power Rangers Unlimited: The Death Ranger #1 is the eight-dollar price point for an issue whose events could easily have been part of the Omega Rangers regular book (and might have added more drama and depth to the Charge to 100 event, rather than as a capstone one-shot right before the end) but even with those concerns, it’s worth 3.5 out 5 stars overall. BOOM! issue #100 is up next, and this issue makes me think Death Ranger is going to be a long-term opponent rather than a done-in-one foe, adding to the feelings of dread for our Ranger pals.

Once again, we get a standalone issue that could have easily been streamlined into the ongoing story proper and made for a better overall experience, but it's a fine (if overpriced) package.