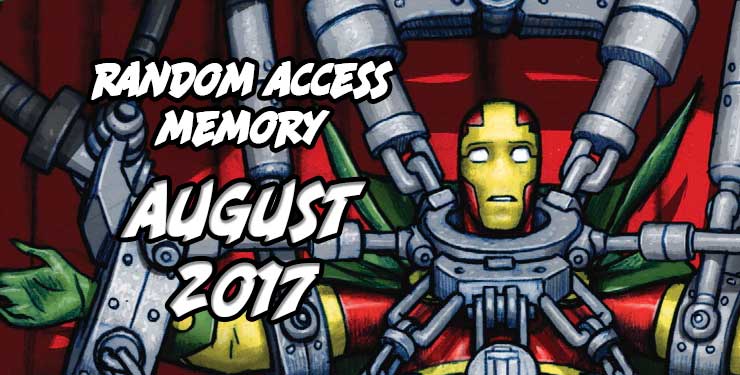 Random Access Memory: Five Years – August 2017 (It Had No Room to Spare)

Rand Bellavia takes a look at his growing longbox, and reflects on comics released in August 2017. Tom King and Mitch Gerads have been working together since 2016’s The Sheriff of Babylon.  Last week they released the Batman one-shot Riddler: One Bad Day, so now seems as good a time as any to example the first issue of their most celebrated collaboration, which came out five years ago this month.  If you haven’t already read Mister Miracle, it’s worth the hype.  I’ve been following Tom King’s career since the aforementioned Sheriff of Babylon, and became a fan of Mitch Gerads with 2011’s The Activity.  I know King is polarizing, but even if Tom King doesn’t do it for you, you owe to yourself to check this series out.

Each issue of this 12-issue series opens and closes with language that seems to come from an earlier, more innocent time.  And it does.  Here is the splash page from the  first issue of Jack Kirby’s 1971 Mister Miracle series: The text from the first 12 issues of Kirby’s Mister Miracle finds its way into these comics unedited but recontextualized.  In Kirby’s book the image is Scott Free (aka Mister Miracle) preparing for a dramatic escape.  King and Gerads set those words against Scott’s suicide attempt.

This is followed by a page of a school child (presumably Scott): Scott survives his suicide attempt, and in a later talk show appearance, claims it was all showmanship. Many pages are presented in this wavy form, and nearly every page has at least one black “Darkseid is” panel, letting us know that all is not well.  The talk show host (Glorious Godfrey, for all you Fourth World fans out there) has a reasonable follow-up question: Scott starts to notice that things are different?  Or are they? As The Smiths famously asked, “Has the world changed or have I changed?”

Scott gets a visit from his dad (yet again missing the opportunity to say “Hi Father” to Highfather), who has some bad news: Later, while working on a new escape, Oberon tells him the story about the child’s drawing of God from earlier in the issue.  Scott seems to be in a better place. But of course Oberon is dead and Scott is imagining him.  Oh, and Darkseid kills Highfather off panel.  So Dad: also dead.  Or was Scott imagining his father as well?  Or maybe they’re both still alive and Scott is dead? But you’ll have to come back for eleven more issues to learn what’s really going on.  Without any plot spoilers I can say that what’s going on is a brilliant character study with a lot of solid observations about what it means to be alive and human, all told through a genuinely innovative exploration of the comics medium. Other Comics I Read from August 2017