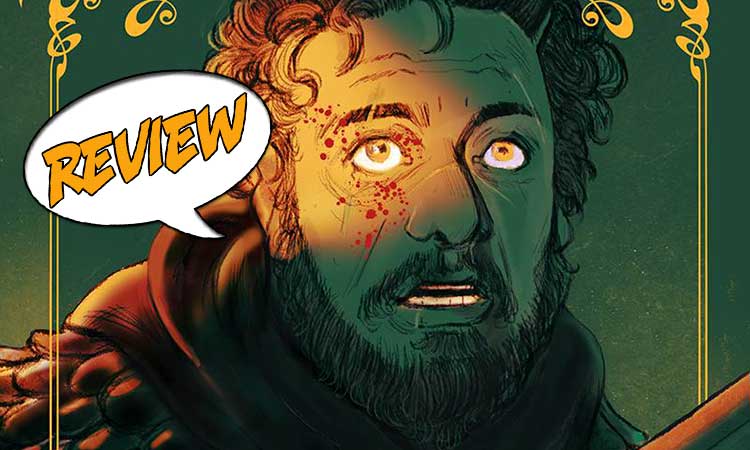 Walter Willem has an unremarkable life that ends abruptly – except that for him, it does not. Why does he find himself in the middle of a battle, and who are his comrades and foes? Find out in End After End #1 from Vault Comics!

Previously in End After End: Walter Willem leads an unremarkable life right up until his unexpected death. There, he finds himself in the unusual state of a perpetual battle he is not prepared for.

A NIGHTMARE IN THE SPACE OF A HEARTBEAT

End After End #1 opens at a train station where Walter Willem pauses to take a picture of a kite, loses his footing, falls, and is hit by a train.

Before he has time to realize what has happened, someone tells him to move. There is a bolt of purple light, and the other man’s head is gone. He looks like a medieval knight. Walter scrambles to get up. A mustachioed man with insect-like wings tells him he is heading the wrong way.

Now he has a chance to take things in. He in the midst of a battle, but the participants are all from different time periods and different regions. The winged man, Grink, calls for the Armory. Walter is given a sword and a shield and told that their mission is to protect a young woman. She is armored as well. Her hair is pink, and her ears are pointed. They must get her past the dark beings throwing the purple energy bolts, up to the top of a rampart to where the enemy leader is.

Plainly Walter is not a warrior. Grink helpfully gives him pointers, such as holding the shield facing the enemy. He blocks a couple attacks and Grink encourages him. Then he recommends that Walter use his sword too.

During a pause in the fighting, Walter asks what is going on and why he is there. In short, this is a place where people come in the moment before they die. They live here until they die for good. The fight goes on and finally the woman, the Catha, takes her place on top of the rampart.

Is this it, Walter wonders. Is he dead now? He is not a fighter. He does not understand this place. He does not want to have to go through a battle again. One of the other men there tells him that the End After End never ends.

THE ETERNAL HORRORS OF WAR

The art of End After End #1 captures the nightmarish feeling of being stuck, unprepared, in the middle of a battle as well as a sense of grim reality even when the combatants are from no particular time or reality. Walter is dressed as he was when he died. The first person he interacts with is Grink, small and winged. We start seeing others in the background, and they are so diverse we have no sense that this is a familiar place. Setting is not so important in this issue. Many of the backgrounds are used to show us how all kinds of people are caught in this battle.

I like the way the style handles faces. Most of the lines from drawing are also inked, so shadows are in crosshatching. It gives the action a feeling of fluidity and looks like expressions are captured in a split second before they change. I like that sense of immediacy. We also get a sense of contrast between Walter, who looks stunned as though he does not understand what is happening, and the soldiers around him who look as though they have been fighting for ages.

BOTTOM LINE: A GRIPPING ENTRY INTO A STRANGE WORLD

End After End #1 has a dramatic start that pulls us into the bizarre existence of a place where the split second before death is potentially unending. We do not understand why this is any more than Walter Willem does, and that make his story compelling.

Why does Walter Willem’s unremarkable life end on the field of a perpetual battle?