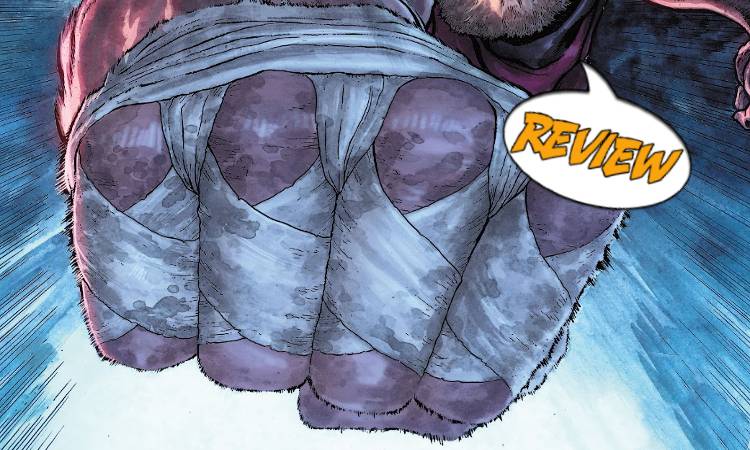 An old man once asked Thor, “Are you the god of hammers?” It’s a very good question… Your Major Spoilers review of Avengers Forever #8 from Marvel Comics awaits!

Previously in Avengers Forever: Meet the most broken Thor in the Multiverse. One who watched Asgard burn, watched Midgard be defiled and was helpless to stop it, as he’s a Thor who cannot lift his own hammer. In desperation, Thor will turn to another of the Earth’s great powers, becoming a pupil of the Thunderer of mystical K’un-Lun, the guardian of the immortal Iron Fist.

High in the Himalayas, a man climbs. Ignoring the advice of Sherpas, he makes his way to a remote peak, where he collapses in the snow, knowing true peace… for a moment. Then, the Hammer of Thor crashes to the ground to taunt him anew. This is a Thor who has never known glory, never succeeded in proving himself worthy and lifting Mjolnir, but he has come to the frozen mountains, seemingly to die. Of course, he hadn’t counted on finding Lei Kung, The Thunderer watching him. The last survivor of K’un Lun offers the last survivor of Asgard a place to stay, ruined though it is, and watching with disdain as Thor angrily tries to punch the mystical hammer that follows him around, as if daring him to take it. Though he bleeds and his knuckles splinter, Lei Kung tells him of the hidden power of the Iron Fist, instructing him to hit the hammer again… and again. For sixty days and sixty nights he punches, when suddenly…

…the hammer dodges his strike.

THE GOD OF FISTS

First and foremost, this is a really cool remix of classic Marvel concepts, and serves as an excellent, if somewhat abridged, origin for this alternate Thor. The vivid sequence wherein Thor continues bashing at the immobile metal of what should be his hammer, splattering his god-blood all over the place, reminds me of kung-fu splatter films like Riki-Oh: The Story of Riki, one-upping the “hardening the fists” scene in Iron Fist’s origin. The biggest problem I have with this issue is that it once again feels disconnected from a greater narrative, focusing entirely on a pair of new characters until literally the last page, when Ghost Rider, Deathlok, and the Invincible Ant-Man arrive to offer Thor a ride. Aaron’s scripting on this issue is very effective, but the fractured narrative of both Avengers Forever and Avengers in the last few months lessens my enjoyment of even an issue that’s this good. There are some peccadillos in the art (credited without any additional comment to both regular penciler Aaron Kuder and Cam Smith) that make some of the transitions difficult to follow, but the reveal of Shou-Lao the Undying is really impressive.

BOTTOM LINE: A SOLID DONE-IN-ONE, BUT…

In the final analysis, Avengers Forever #8 is intentionally and by design a stand-alone issue, which affects how it plays as a single chapter of comics, making for a still above-average 3.5 out of 5 stars overall. As with so many modern comics, it’s clearly assembled for the inevitable trade paperback, which unfortunately affects my reception of it, but it’s more successful than not.

Both Avengers titles are on slow-burn right now, introducing new characters and variants that are admittedly cool, but somewhat lacking in connective tissue.