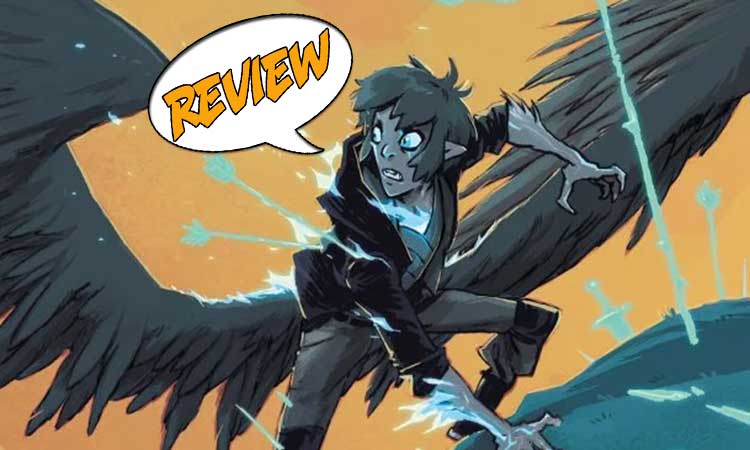 Wynd: The Throne in the Sky #1 Review

Wynd continues his journey, now in a land where he fits in, and his human sister Oakley stands out. They leave a ruined city behind them, but what lies ahead? Find out in Wynd: The Throne in the Sky #1, from BOOM! Studios.

WYND: THE THRONE IN THE SKY #1

Previously in Wynd: King Yossar in Pipetown is the last king in the Empire of Man, a place where having magical blood is a death sentence. Wynd grows up there in hiding in an adoptive family. Rumors spread of a conspiracy by Duke Yadrial to form a United Esseriel for all peoples. The King’s son, Prince Yorrik, escapes Pipetown to get to the Duke, his uncle. He travels with his friend Thorn, and Wynd and his sister Oakley go with them. On the way to meet the Duke, they are hunted by the Vampyre General Zedra. Wynd undergoes a transformation, growing wings and looking like the legendary Winged Ones. Little do they know it, but Esseriel is on the brink of war!

Wynd The Throne in the Sky #1 opens in Pipetown in the past. Now we know it is the capital of the Last Empire. But this is when Molly was much younger. As she tries to clear a drunk man (Henry) out of her pub, he sees a very young Oakley and then, in the shadows, Wynd. He tousles their hair and spots Wynd’s pointed ears. Molly sends the kids to the basement and follows Henry. Along the way, a city guard named Roderick stops her. He is Oakley’s father, and he knows how Molly is protecting Wynd. He promises to keep an eye on Henry.

After this prologue, we get a full page explaining the story so far. This is a double-sized issue, so this does not detract from the story at all, and it is immensely helpful to anyone joining the series just now. A lot has happened, and now Wynd, Oakley, Yorrik, and Thorn continue their travels with Yorrik’s cousin Bastian, his friend Teek, and Merien, who is a Faerie.

Oakley is hungry for real food, not like the bugs Merien has found for them. This gets Thorn and Yorrik reminiscing about food, and soon they think they can smell something cooking. They find a free house, a sort of inn for travelers. Merien is cautious since the city they were last in was taken by Vampyres. They need to look less conspicuous. Here, that means the humans need to change. Weirdbloods are far more typical.

They get food and arrange for rooms for the night. Not many other travelers are about. Meriel spots some Faeries with distinctive wing markings and describes them as Utopians, the ones who hold most to the belief that the Winged Ones will return to bring peace to Esseriel. She looks at Wynd and says he might be a tool to help them. He bristles at this, not wanting to be a tool for anyone, and walks away.

Oakley joins him at the bar to talk, but they overhear the couple who own the inn talking about packing up and leaving at dawn. In the city, they are rounding up humans and weirdbloods. General Eks is raising an army to march on Pipetown. This sounds unusual even to Merial, and Bastian is concerned for his father.

As well he should be. The scene shifts to the Duke addressing the High Council on behalf of the human community. He still dreams of a united Esseriel. But they believe that humans are responsible for the fall of Escalion. The Duke is put under arrest. The young people have a more dangerous journey before them. And what about the Vampyres?

Wynd: The Throne in the Sky #1, is a complicated story with a lot of characters and the art helps us to keep track of everything that is going on. I love the characters. They are expressive with a modest amount of exaggeration that gives them some extra intensity. There are moments of humor, but this is a dark point in the story, and it has deep roots. That is why I like opening sequence. In it, Molly is not much older than Oakley is now. She is a single mom running a pub and taking no nonsense from anybody. In her intensity, we see several traits she shares with Oakley now. In contrast, Henry the drunk is depicted in a more comedic way. His facial expressions are jovial and rubbery. He seems generally harmless, but he still could be a danger to Wynd.

When we reconnect with the young people, there are seven of them, which seems appropriate for a fantasy adventure. I like the way the focus in on them and the background recedes without quite disappearing. A few pages suffice to remind us of their various personalities in a more lighthearted moment. There will be time later to deal with their interrelationships with one another. I do appreciate that Yorrik has grown up a little since we last saw him, although this journey is plainly well outside his comfort zone.

If you are at all curious about Wynd: The Throne in the Sky #1, it is a solid jumping-on point that fills you in on the story so far and sets up the heightened stakes for this arc. The characters are diverse, and the world-building is fantastic.

Wynd: The Throne in the Sky #1