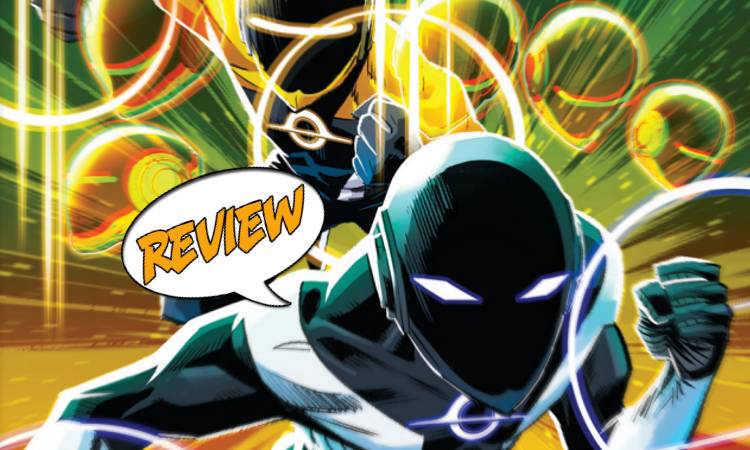 Radiant Black already died once. What if it happens again? Your Major Spoilers review of Radiant Black #17 from Image Comics awaits!

Previously in Radiant Black: Marshall faces down a gauntlet of enemies, each more determined than the last to take the Radiant from him by any means necessary. He needs a miracle.

Will the unexpected appearance of Radiant Yellow be enough to turn the tide?

As last issue ends, the assault of a new villain called Mecha left Marshall fatally wounded, with the strange mega-dimensional robot who gives him his powers informing him that he’s going to die. At the same time, his best friend Nathan receives a vision explaining that he is once again Radiant Black, immediately followed by the arrival of Wendell, Radiant Yellow. Explaining that he can see certain chains of future events, Wendell tells him that he has once again been put in the cradle of destiny, leaving Nathan to engage Sheer, Mecha, and the rest in combat. Well, all but Doppler, who spirits the wounded Marshall away, worried that she’s been on the wrong side all along. While Nathan realizes that their foes were actually aware of the changing of the man in the suit, and that their actual goal is to steal the radiant itself!

And that’s when Marshall gets up…

The most commonly recurring element of Radiant Black is the sudden swerve, and this issue features no fewer than three of them. Nathan’s return to the role of Radiant has been simmering in the background of the last three issues, but this issue’s reveal of the new Radiant Black paradigm is a shocker. Doppler’s face-turn was well-signaled, but still plays perfectly for me, especially Radiant Yellow’s prescient role in it all, and while Mecha goes down, two of his cohorts get away. Costa’s art is lovely throughout this issue, especially in showing the new Radiant tricks during the final battle, but I’m still having some issues with the similarities in design between the villains and even between Radiant Black and Ax, one of the bad guys. Add in the fact that they’re not clearly named or identified in these pages, other than the last recurring gags about their team name, making for a few moments that make this chapter feel like it’s missing context.

Even with those storytelling issues, Radiant Black #17 is a winner for me (and yes, it’ll probably read much better in trade) featuring YET ANOTHER game-changing twist, Costa’s energetic art, and a horrifying vision of doom from Radiant Yellow, earning a better-than-average 3.5 out of 5 stars overall. If you haven’t been reading this one, my recommendation is to start grabbing back issues now, because it’s classic superhero storytelling with a thoroughly unpredictable, modern point of view.

The moment I've been worried about comes and goes without the disaster I expected, but there's always another disaster waiting in the wings.